Myprotein has a ton of these types of products in Europe, and is now bringing many of them to the America shores!

If there is one downside to THE Pre-Work, it’s that the formula contains 150 milligrams of caffeine per serving, which may be low for some people. We’ve heard from many readers that they prefer 200 milligrams or more per serving in their pre-workout. Apparently, Myprotein is on the same page because they’ve just released a more potent version of THE Pre-Workout— called THE Pre-Workout+. While it does contain an extra shot of caffeine, that’s not the only difference between the two pre-workouts…

What Makes THE Pre-Workout+ Different

THE Pre-Workout+ is loaded with 300 milligrams of caffeine, twice as much as its earlier iteration. derived. The caffeine is derived from a blend of fast-acting caffeine anhydrous and slower-to-digest caffeine beadlets. This sustained-release mixture is designed to quickly raise energy levels and keep them elevated. Myprotein isn’t the first to use caffeine beadlets, but it’s extremely rare to see. It’s not the only way this pre-workout stands out from the competition! 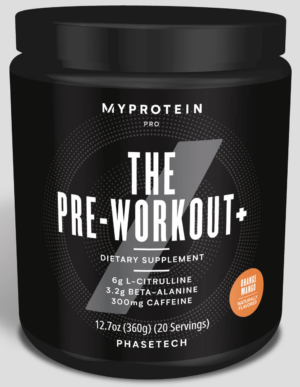 Myprotein’s most powerful pre-workout to date!

Here are more comparisons: In addition to the bump in caffeine, THE Pre-Workout+ has higher doses of beta-alanine, tyrosine, AstraGin, BioPerine, and L-citrulline, but no creatine monohydrate or TeaCrine. It also contains alpha-GPC, VASO6, L-theanine, taurine, and hawthorn berry fruit extract to further boost your mind-to-muscle connection, focus, pumps, and performance.

For those days where you want less caffeine try a half serving of THE Pre-Workout+ and stack it with one serving of THE Pump, a stimulant-free pre-workout with a similar ingredient profile.

One thing we really appreciate about Myprotein Pro Range is that nearly every product has a fully transparent label. So instead of concealing dosages behind a “proprietary blend” classification, the company clearly identifies the amounts of each ingredient in the formula. Furthermore, several supplements in the Pro Range line use patented or trademarked ingredients from some of the top ingredient suppliers, including NuLiv Science, Sabinsa Corp., and Compound Solutions.

Keep reading to learn more about THE Pre-Workout+ and sign up for Myprotein news and deal alerts below to receive notifications when new supplements, flavors, and sales go live. If you want to pick up any of Myprotein’s products, use code PLOW40 for 40% off!

Myprotein recommends mixing one serving of THE Pre-Workout+ with 10 to 14 ounces of cold water. For best results, consume 30 to 45 minutes prior to your training session. If you’re sensitive to stimulants, start with half a serving to assess your reaction. Each serving of THE Pre-Workout+ is 18 grams, which is a pretty hefty scoop size. There are approximately 20 servings per container.

Here’s what one serving (18g) of THE Pre-Workout+ contains:

THE Pre-Workout+ was released in two flavors: Orange Mango and Rainbow Candy. We’ve never tasted a Rainbow Candy flavor from Myprotein before, so we’re excited to sample this one.

Here’s an updated list of all available flavors for THE Pre-Workout+:

Maximize Your Results with The Pro Range

Myprotein says they designed The Pro Range “for those who want it most.” We’re excited to see the company continuing to expand The Pro Range because it’s in line with what PricePlow readers are looking for.

To us, this means more advanced formulas that feature clinically-substantiated and science-backed dosages of well-regarded ingredients. From a more advanced line, we also expect to see fully transparent labels, which is exactly what Myprotein uses for The Pro Range. This allows consumers to better understand what makes The Pro Range stand out from the rest of the line. 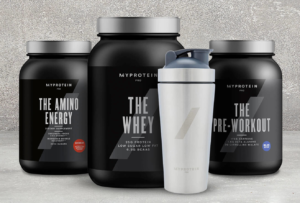 Pick up the Myprotein Pro Stack!

So far, we’ve covered a majority of The Pro Range, including:

If you want to pick up a tub of THE Pre-Workout+, or any other Myprotein supplement, use code PLOW40 for 40% off! Before you go, subscribe below for more Myprotein news, reviews, and deals from PricePlow.