Posted on December 31, 2018 by PricePlow Staff | No Comments 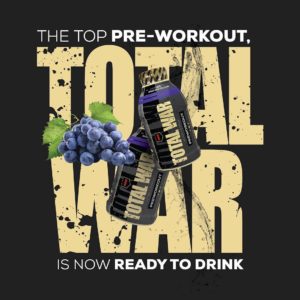 Redcon1 made a serious push on product teasers to end 2018 on a high note, but none were more exciting than this one. Just recently they teased a cereal protein bar, and now the company has launched a new way to enjoy their top rated pre-workout Total War – straight from the bottle! Total War is already available in over a dozen flavors to suit anyone’s taste buds. Redcon1 has now taken their flagship pre-workout and bottle it into an RTD (Ready to Drink) — introducing Total War RTD.

The convenience of RTD drinks and carbonated beverages has skyrocketed during 2018 (of major note were Nutrabolt’s Cellucor C4 Carbonated Cans and the newly-launched Xtend Carbonated). With more and more brands moving into the “fridge space” area, it was only a matter of time before Redcon1 entered the fray!

Redcon1 stated that they planned to deliver the same pre-workout formula as the powder version, with only one small change from the powder to the ready to drink mix — they removed the 10mg of Bioperine! Bioperine is an ingredient which helps enhance the absorption of certain ingredients, but it also comes from black pepper extract (it’s 95% piperine) and adds a spice that likely wouldn’t set will in a can.

There are some new changes we’ve seen in the bottles, though — the AMPiberry from the powder version has been dropped (we’re still not sure what that ingredient is), and instead of Cocoteanol, we’re seeing “CocoPhenols”, which have Theobroma cocoa and camelia sinensis extract. 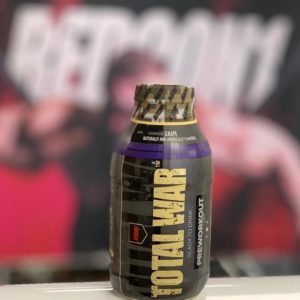 Grape is the first flavor to drop

Total War RTD highlights a clinical dose of 6g L-citrulline DL-malate 2:1 and 3.2g beta-alanine. Both of these propel pumps and performance during exercise. Redcon1 also has 1g of Agmatine included as an N.O (Nitric Oxide) enhancer to improve blood flow and muscular pumps during exercise on top of that citrulline malate. There is 300mg of caffeine and 100mg of di-caffeine malate, which makes up the stimulant aspect. This brings the total amount of caffeine to 373mg – a very strong drink!

Awesomely, a gram of taurine, which boosts endurance on the first use, has been added too!

As Redcon1 pumps out new products you will want to keep the PricePlow alerts occupied. The initial launch is for Grape, but the earlier news is that there would be a total of six flavors available for the supplement with Sour Gummy, Strawberry Mango, Grape, Orange Crush, Rainbow Candy, and Green Apple. Always take advantage of the coupons, deals, and savings offered when new alerts are active: