RedCon1 TOTAL WAR 2018: The International Wave of Warfare is Here

Note: this post was updated in April 2018 to reflect the latest updates to the ingredients and five new flavors. 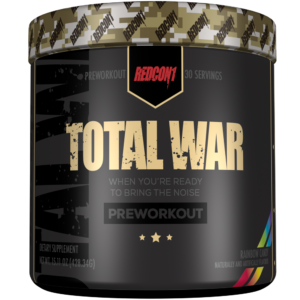 The aptly-named Total War has consistently ranked as one of our top “aggressive” stim formulas since its release well over a year ago. With DMHA and Eria Jarensis looking to be on the way out — especially overseas where the brand is surging — RedCon1 has made the decision to remove both of those stimulants (yohimbine was also removed), adding in a few other surprises to allow you to continue your mission for total domination of the iron.

Today we’re happy to introduce you to the new version of Total War, released in April 2018. It’s got just as much pop as the original version, but is friendly to both the international community as well as the most popular retailers.

Before we get to the ingredient breakdown, take a second to check the best deal and sign up for PricePlow’s RedCon1 alerts from PricePlow and see where the prices land after our coupons:

You can also stay up to speed with all of the brand’s happenings by seeing our RedCon1 news page on PricePlow.

We’re always on the lookout for well-balanced pre workouts that are loaded with energy, pumps, and endurance support. And we got just that. This is one powerful pre workout you won’t want to miss!

RedCon1 isn’t one to skimp on flavor selections. Though Total War initially launched in only three flavors, the flavor lineup has seen as many as twenty-five flavors over its history! WOW!

The entire list as of April 2018 (both past and present) is below:

Need more focus? Get the BIG NOISE stacked in 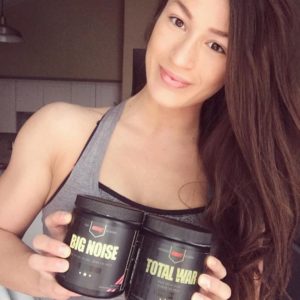 Stack Total War and Big Noise for the ultimate combo of energy, focus, and pumps!

While many of the ingredients in Total War provide focus through their sheer stimulant-factor, they are not necessarily “nootropics” in the direct sense.

So if you’re the kind of athlete who wants to enhance the “mind-muscle connection”, perhaps by increasing your acetylcholine levels (acetylcholine is the learning neurotransmitter), then add in the stimulant-free pre workout, BIG NOISE, for some absolute insanity.

BIG NOISE is a bit different than most stim-free pre workouts because it enhances focus and strength as well as the pumps. It picks up right where Total War leaves off, and is going to be a scary stack to deal with.

In fact, Aaron Singerman went on the record saying this about the stack:

”Lemme tell you this: when you combine Total War & Big Noise – it’s the best pre workout I’ve ever taken in my entire life. Better than anything, ever. And I’ve tried them all. From Ultimate Orange to Jack3d.”

RedCon1 continues to bring about effective and innovative formulations, what’s up next for the brand?

RedCon1 continues its unstoppable roll as one of the premier companies in the industry. With its clinical doses, transparent labels, interesting ingredients, and never-ending onslaught of new products, the brand has taken a decided leg up on all newcomers (and many established vets) in the business.

But of course, this isn’t just some ‘new’ brand off the streets. This is industry veteran Aaron Singerman, and his military-themed tour de force on supplements has the competition on notice.

Total War takes the bull by its horns and will have you ready to demolish the weights like you’ve never felt before. It’s available now for order, so don’t delay if you’re ready to kick some serious brass and takes some names along the way!