Is caffeine of all things the next on the FDA’s radar? And if so, what do they consider “excessive” enough to be “adulterated”? 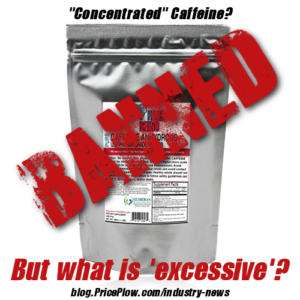 Caffeine Powder (and any form of ‘concentrated’ caffeine) has effectively been banned by the FDA. Our biggest issue? The FDA doesn’t define what is ‘excessive’, leaving the door open to regulatory creep.

A single teaspoon of caffeine powder contains the same amount of caffeine as about 28 cups of coffee. A lethal dose. For the vast majority of supplement history, the FDA has allowed caffeine anhydrous products to go unregulated. But for the first time, the FDA is officially slamming its foot down.[1] Could this be the end for powdered caffeine as we know it?

Caffeine the next supplement to get more regulations?!

Each year, caffeine overdose or overconsumption kills at least a few people, oftentimes more.[2] Its most dangerous form, straight caffeine powder, is now a widely-available supplement. However, it won’t be for long: In April of 2018, the FDA has finally took action regarding the dangers of bulk caffeine by warning the public and industry manufacturers of the potential dangers associated with misuse of caffeine through recently published guidelines.

Could this be the end of caffeine supplementation as we know it!? …Or just the end of bulk caffeine powders?

In August of 2018, Mike finally took to YouTube to explain some of the issues discussed lower down. Watch this if you don’t feel like reading:

Before we proceed, it’s important to note one thing straight from the horse’s mouth:

The FDA’s guidances are NOT actual laws!

The FDA’s own guidance page states as much:

Guidance documents represent the Agency’s current thinking on a particular subject. They do not create or confer any rights for or on any person and do not operate to bind FDA or the public. An alternative approach may be used if such approach satisfies the requirements of the applicable statute, regulations, or both. For information on a specific guidance document, please contact the originating office.

What this means is that the FDA strongly discourages products they’re “guiding” against, and would more than likely be willing to take it to a legal battle to prove their danger (which they must do in order to ban any supplement).

However, as it stands right now, this guidance does not create an enforceable law. It is instead what we consider a “blanket warning” to the industry.

Back to the topic at hand: 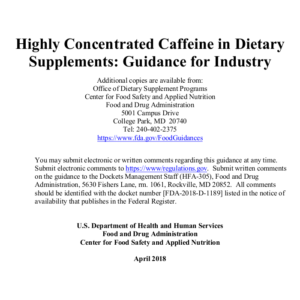 But what is the official definition of “highly concentrated”???

In the recent statement, the FDA concluded that the difficulty curve in proper volumetric measurements of caffeine powder puts customers at a “significant or unreasonable risk of illness or injury”.[1] Even manufacturers that include tiny “scoops” to measure out individual servings, in the FDA’s opinion, are putting consumers in danger.

It’s hard to disagree with this sentiment. The tiny scoops included in ingredients with tiny doses like caffeine are far away from pinpoint accuracy, and their users are too often far away from being cautious or using milligram scales.

The FDA hates these small scoopers, stating that “reasonably foreseeable measurement errors, such as packing the powder too tightly or use of a ‘heaping scoop’ instead of a ‘level scoop,’ can increase the amount of caffeine in a single dose by more than 200%”.

Further, it just takes one mistake of confusing your caffeine and creatine tubs to have an absolutely deadly experience.

And so for those reasons, after five warning letters went out in 2015,[2-6] the FDA just made it more official:

…or is it more nanny state?

However, some may see this as the first act of the “supplement police state”. Plenty of consumers are more than capable of using caffeine powder responsibly. There are dozens of cost-effective scales on the market that would allow for consumers to measure their caffeine by weight instead of volume. Given that volumetric measurements are unreliable,[7] measuring by weight makes the most sense.

This guidance is extremely vague, which could allow for “regulatory creep” to occur, since the word “excessive” is not defined by the FDA in this context.

Our take is that this is likely a good first step in safeguarding the average consumer. It’s akin to finding a knife in your child’s playpen and taking it out. We don’t like more regulations, but we also don’t like subsidizing your hospital bills with our tax money.

But where’s the true allowable threshold?

But here’s the problem with this guidance: there’s no set adulteration threshold!

At the end of the PDF, the FDA basically states that products “that do not provide an excessive amount of caffeine per item” are not adulterated. What do they mean by “significantly diluted”?

So what does the FDA consider to be excessive?! 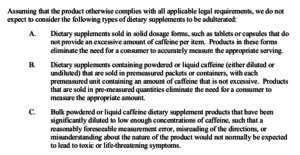 It is unclear what the FDA means by some of this.[1] What is the meaning of “significantly diluted”?

Given the FDA’s lust for taking an inch and going a mile, citing fraudulent research, and their hypocritical stances on pharmaceuticals, we’re weary of what this means for other caffeine-containing products, and even though the supplement law of the land (DSHEA) wasn’t designed this way, believe there should be set limits. Vague laws are the tools of tyrants.

Caffeine-based pills and pre-workouts make it easy for people to achieve a non-dangerous dose. Will the FDA leave these products alone? Or is this the first step in an industry-sweeping move to regulate caffeine and dietary stimulants more directly?

Now, the last question on that matter is….where does a certain pre workout with 600mg caffeine per serving fit in with all this?!