A new meta-analysis is out, and TAURINE Turns Out to Be Terrific for Tenacity (endurance)! 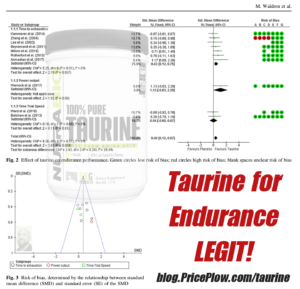 Taurine, long used for a ‘filler’ amino acid, turns out to be legit for endurance… and after a single use!

Taurine, an organic compound that blankets the tissues of your body, may be the next best thing for endurance athletes. A recent meta-analysis went over the ifs, whens, and benefits of taurine supplementation – and taught us something we suspected but weren’t 100% confident in.

In this article, we’ll give you the skinny on everything you need to know about taurine, and why it’s no longer just a “filler” amino acid… it’s better than we thought!

…and no, this is not extract from bulls, despite urban legend.

Taurine — What is this stuff?

If you have a background in the biological sciences, the word “taurine” has popped up before. And if you drink energy drinks or take pre workout supplements, you’ve definitely seen it on your can or on your tub’s label.

These researchers (Mark Waldron, Stephen David Patterson, Jamie Tallent, and Owen Jeffries) waded through a ton of unacceptable studies to find those that properly dealt with endurance… and then came to a solid conclusion!

However, you may not know what it does. Taurine is an organic acid that acts as an intermediate in complex procedures throughout the body. Think of it as a “chemical middleman” in processes like bile formation, osmoregulation, and even calcium signaling.

Taurine is also known as:

Beyond its status as a middleman, taurine may directly impact the body. In the last few years, it’s become famous for its potency as an anti-diabetic ingredient. It may help ease joint pain associated with diabetes[1] and even has protective effects on organs heavily damaged by diabetes.[2]

Taurine, while typically dosed from 500mg-2g a day, has been shown in at least ten studies to improve endurance in athletic populations when dosed anywhere from 1-6g a day![3] These studies were recently compiled into a meta-analysis (for those that missed our previous research dives, a meta-analysis is basically a statistical summary of quality research available on a certain topic). 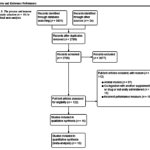 The best part of this meta-analysis is that no outside funding influenced the research team. In other words? We don’t have to worry about bias very much here. The researchers of this analysis were also very thorough, funneling 3431 articles down to just under ten.

What Did They Find from the quality taurine studies?

The research team behind this paper simply concluded that taurine supplementation improves athletic endurance. The effect is even more profound in “TTE” trials, which is where an exercise done to exhaustion.

Do it for the HIIT

When we read these findings, our immediate thought goes to trainees that utilize HIIT (high-intensity interval training). Taurine might help you push yourself much harder on those last few sprints.

They also found that taurine is an effective supplement when taken alone. For many years, taurine research had a flaw: most participants dosed caffeine alongside taurine.[4] After all, it’s always in those energy drinks and pre workouts! But as the studies compiled in this analysis focused on isolated taurine use, it’s now safe to assume that taurine is effective without caffeine.

The researchers even postulated that taurine may be the reason that energy drinks seem to act as an ergogenic agent![3,5] 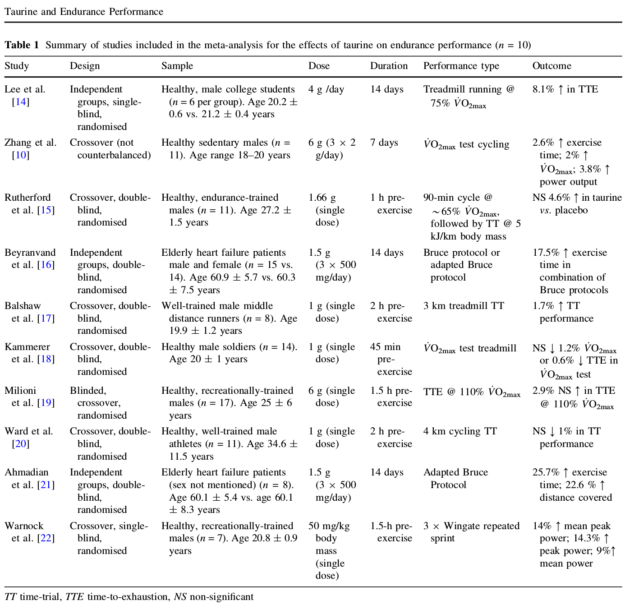 The Taurine Endurance Research Data from the Meta Analysis

Taurine is a unique ingredient in its dosing. The meta-analysis found that larger doses of the ingredient didn’t improve endurance any more than much smaller doses.[3] As there is some concern regarding huge doses of taurine over time, this is a welcome finding. Just try to keep your daily dose at 3g or less and you should be more than okay.[5] 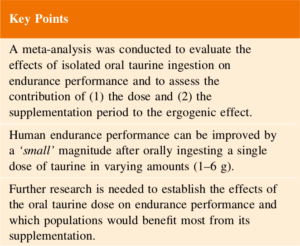 Taurine’s Benefits (endurance-wise) can be seen after a single use!

The best part of low doses being as effective as high doses? You save money. Since we are PricePlow, you know we’re fans of this data!

In addition, the tiny risk associated with taurine supplementation may be a thing of the past, as no adverse events occurred in any of the individual studies summarized in the meta analysis.[3] Realize that many of those other studies had confounds involved, such as stimulants. But with the solo taurine studies analyzed here with reasonable doses, there were no issues!

The meta-analysis also uncovered something particularly interesting regarding dosing of taurine. It doesn’t really matter how often you take it! Supplements like creatine or beta-alanine are more effective over time (chronic supplementation). With taurine, you can dose it right before a workout (acute supplementation) and experience benefits. 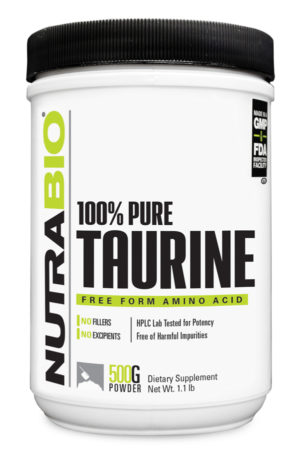 This is awesome for people that do endurance work occasionally. Better yet? One less thing you have to take every day – just throw it in the pre workout!

So it turns out those energy drinks were on to something – this is more than just a cool sounding name on a can.

When a paper comes out like this, ingredients sometimes explode in popularity. The authors of the paper attributed the benefits of taurine to several biological processes. As the research is still murky on the why of taurine supplementation, we stick to the practical aspects of the acid.

In the coming years, we’d like to see an analysis that covers more papers, just in case these researchers were too picky. Ten studies is still not enough to say 100% for sure that taurine is a miracle supplement.

It’s also important to realize that the benefits taurine offers are relatively small, just like creatine, compared to certain banned substances. However, for upper level athletes, a small increase in performance may be all they need to top their opposition.

Note: NutraBio’s taurine is shown above because it is 3rd-party lab tested for purity.