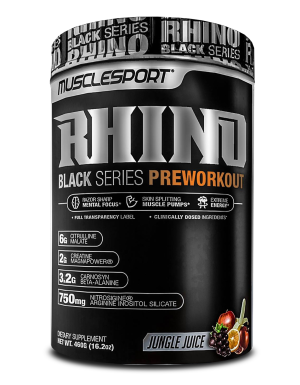 Rhino Black is the newest high energy, pump-centric workout from MuscleSport specifically tailored to give razor focus and skin-splitting pumps!

As each week passes, it seems a new pre workout enters the fray to compete for the title of Best Pre Workout. MuscleSport is the latest company to submit an entry to the rather crowded field of well-dosed, open label pre workouts we’ve seen so far in 2015.

Rhino Black is the next evolution of their popular pre workout Rhino 2.0 which previously contained the now “banned” stimulant, AMP Citrate.

To say we’re excited would be an understatement.

We’ll get to the goods in Rhino Black in one second, but first make sure to check the best deal and sign up for alerts from PricePlow:

Rhino Black sports a 98% open label with the remaining 2% being “complexes” that list the dosage but not individual amounts of each ingredient. Let’s see what Rhino Black is packing to help create “razor sharp mental focus” and “ skin splitting muscle pumps”! 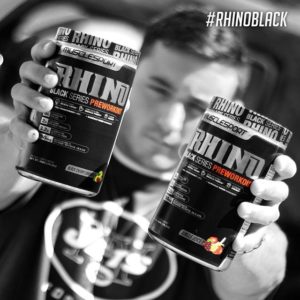 We finally get 2 new exciting flavors with Rhino Black in Black Cherry Lemonade and Jungle Juice! Or is jungle juice just a clever disguise for “fruit punch”?

All we can say is FINALLY when looking at the flavors of Rhino Black. And we say finally with much appreciation as we have two unique flavors to try when deciding which way to go with Rhino Black. Currently the two options are Black Cherry Lemonade and Jungle Juice.

This is a welcome change from all the fruit punch and blue raz flavors we’ve seen lately. Props to MuscleSport for going outside the box with flavorings! Although… jungle juice might just be fruit punch in disguise. We’ll have to find out from MuscleSport themselves.

MuscleSport’s latest pre workout offering is one serious pre workout intended for those looking for a high-energy, pump heavy product. Rhino Black uses a combination of proven NO boosters along with several other ergogenics to present a comprehensive pre workout formula that should take care of any and all of your wants and desires.

Overall, the only issue is that creatine and betaine are not “fully” dosed, but the stuff that matters for your immediate workout sure as are! And for that reason, we’re excited. It’s cheap and easy to find some extra creatine to take later on.

Also, if you have a very low stimulant tolerance, this one might not be for you, but even at half a scoop you’ll still get very good pumps – more so than a lot of other stuff out there!

Check the widget below for the best price and let us know your thoughts on Rhino Black if you give it a shot!