L-Tyrosine vs. N-Acetyl L-Tyrosine: A Tale of Two Tyrosines

L-Tyrosine vs N-Acetyl L-Tyrosine — different forms of the amino acid Tyrosine, but which one is better?

We answer this hotly-debated question in today’s PricePlow post focused on nootropics! 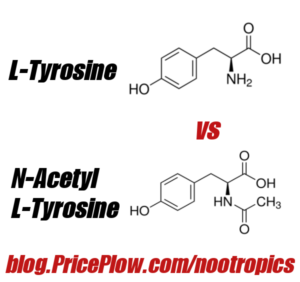 Today we answer the question every nootropic user has asked: which form of L-Tyrosine is best?

The wonder of science these days is that the regular, everyday ingredients we see in supplements can come in a number of alternative forms. We’ve seen this in the case of Agmatine, Citrulline, Betaine, and most notably, creatine.

Now, how does this relate to Tyrosine?

Well, the two forms of Tyrosine we encounter most frequently in formulas these days is L-Tyrosine and N-Acetyl L-Tyrosine (NALT). A couple years ago, the trend most formulators have followed is to include NALT over L-Tyrosine on the grounds it offers “superior bioavailability” due to greater water solubility.

Therefore, with that theory in mind, you could include a lower dose of NALT and still get the same effects as you would with a larger dose on regular L-Tyrosine. But does NALT actually offer superior bioavailability, and is it more effective at increasing Tyrosine levels in the body than L-Tyrosine?

Let’s find out, because we’re seeing a shift back towards a combination of these two tyrosines, or just high-dosed straight L-Tyrosine in pre workouts lately! Which is right?

A close-up of regular old L-Tyrosine. It’s a great nootropic for focus and concentration, and inexpensive too.

Before we get into the tango of the two tyrosines, it’ll probably help to explain what the heck Tyrosine is and what it does.

Tyrosine is a nonessential amino acid, meaning your body can synthesize it from other amino acids you ingest. So it’s not essential to take in order for your body to get and use it. It’s used to create several powerful catecholamine neurotransmitters including epinephrine (adrenaline), norepinephrine (noradrenaline), and dopamine – so you can see why nootropic users enjoy it.

Metabolism of Tyrosine to Dopamine, Noradrenaline (Norepinephrine), and Adrenaline (Epinephrine).

N-Acetyl L-Tyrosine is the acetylated form of Tyrosine, meaning the amino acid is bonded to an acetyl group (boxed in red on the picture). In order for the body to become active and form tyrosine, NALT’s acetyl group must be cleaved off or removed. 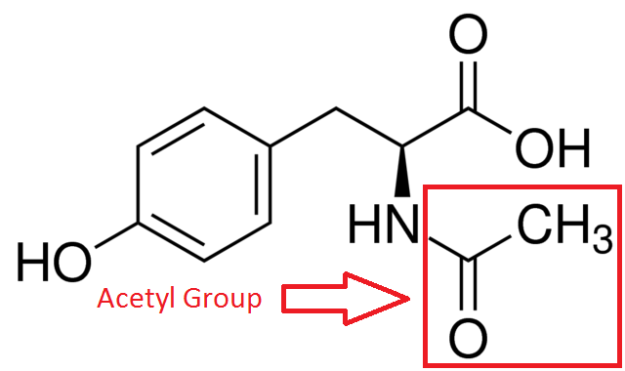 That makes sense, but we’re more interested in what happens in our bodies, not our shaker cups:

Now we get to the real heavy lifting portion of the article – water solubility, bioavailability and absorption.

So the reasoning supplement companies opt for N-Acetyl L-Tyrosine rather than L-Tyrosine is that NALT is is much more water-soluble. Companies have thus mistakenly assumed that greater water solubility yields superior bioavailability.

Bioavailability refers to the amount of a compound that enters circulation consumed and becomes active. If a 100% of an ingredient reaches circulation, and then becomes active, it’s said to be 100% bioavailable.

Now, let’s look how this plays out with Tyrosine. 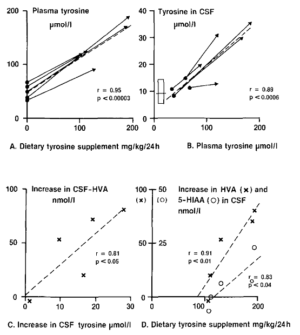 Note: Different forms of delivery (pills vs powder) were used in these trials, so that may account for the differences in tyrosine elevation levels.

When looking at NALT, very few studies have been conducted on it with subjects consuming it orally. A couple of studies have investigated its effects when administered intravenously.

Why is this important? 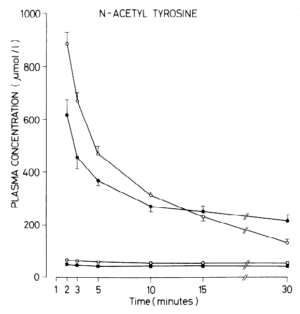 As you can see here, in a study comparing Tyrosine (squares) and N-Acetyl L-Tyrosine (circles), NALT is a dud.[6]

Because intravenous administration yields 100% bioavailability of compounds since it delivers them directly into the bloodstream. So, intravenous injections give us the “maximum” power of a compound in the body.

As it turns out, NALT’s a bit of a dud here!

One piece of research noted that subjects given 5g of NALT intravenously only experienced a 25% increase in plasma tyrosine levels.[5] A second study found NO increase following intravenous administration of NALT.[6]

And that was intravenous, where it was put directly into the bloodstream! We have to assume it’d be even worse when ingested orally!

Clearly NALT isn’t as superior as we’ve been led to believe, but why is that?

Basically, it all circle back to NALT’s different structure. The body doesn’t readily convert N-Acetyl L-Tyrosine to Tyrosine. To prove this, researchers measured the amount of NALT in urine to see how efficiently the body converts NALT to Tyrosine.

Following intravenous infusions, one study noted that 35% of the administered NALT was excreted in the urine as NALT.[7] Two other studies documented as much as 56% and 60% of NALT administered was excreted in the urine unchanged.[5,6] If that’s not making sense, it basically means that up to 60% of N-Acetyl L-Tyrosine is never converted to tyrosine, it’s just “peed” out! Garbage in, garbage out!

Researchers in the trial concluded:

”We conclude that under these conditions the usefulness of NAT (N-Acetyl L-Tyrosine) and NAC (N-Acetyl L-Cysteine) as precursors for the corresponding amino acids in humans is not apparent.”[5]

Proponents of NALT will point to its ability to cross the blood-brain barrier due to its unique structure easier than L-Tyrosine, but is this even true?

Not by a long shot! At least not in mice…

Researchers tested several different forms of tyrosine delivered orally to mice to document which forms were superior for increasing brain levels of tyrosine. The researchers fed the mice:

Here again, another “myth” of NALT’s superiority has been shattered. Not only is it not better than L-Tyrosine for elevating brain levels of tyrosine, it’s the WORST form of Tyrosine for increasing tyrosine levels!

The whole “water solubility is better” marketing hype doesn’t only apply to Tyrosine. It’s also rampant in the world of creatine too! Taking a look at the various forms of creatine, there’s:

The OG form was creatine monohydrate. It’s the most studied and proven effective form of creatine around. However, as newer creatine forms have sprung up over the years, supplement companies looking to capitalize on these novel forms of creatine bill them as “more effective and bioavailable than monohydrate” simply based on the fact that they are more water soluble, exert less GI distress, taste better.

The list goes on and on of crafty ways companies spin alternative forms of ingredients to try to sell them. Sadly, despite these claims of superior water solubility, taste, etc. none of the these forms have dethroned monohydrate as the king of creatine. Basically, these companies are just using savvy marketing as a way to push more product.

Takeaway: In one word… L-Tyrosine!

The World’s Most Trusted Supplement Brand, NutraBio tests every incoming and outgoing batch of product to ensure safety. That’s why they’re our Top Tyrosine supplement. And they didn’t pay us for this post.

So, what form of tyrosine should you choose for your supplement needs? L-Tyrosine every time!

Despite a few holes in the human research, the collected available data clearly indicates that L-Tyrosine if superior to N-Acetyl L-Tyrosine, water solubility be damned!

Not only is NALT inefficiently converted by the body, it also does a poor job of elevating plasma tyrosine when given intravenously. Don’t fall for the company line of better water solubility yields better bioavailability.

You’ve got the facts, now so you can make the most cost efficient, and effective, decision possible!

You can compare prices on L-Tyrosine supplements on PricePlow or see some of the featured products below, which includes top-rated NutraBio L-Tyrosine: