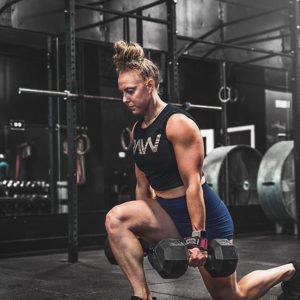 Fuel your workouts with RAW Nutrition.

In order to lose weight, you must create a caloric deficit by expending more calories than you take in. When you maintain this deficit over the course of several weeks, the body slowly sheds fat. As long as you’re eating right and resistance training regularly, you retain lean muscle mass. Fitness experts say the goal shouldn’t be to only focus on losing weight because that would mean losing muscle mass along with fat and water weight.

So what can you do to minimize muscle loss while at the same time maximizing fat loss?

Here are some tips that we’ve picked up over the years from health and wellness professionals: Keep yourself in a slight caloric deficit, exercise regularly, manage stress, and eat a balanced diet that’s also high in protein (at least 0.8 to 1 gram of protein per pound of bodyweight).

When purposefully reducing calories below maintenance levels, you’re essentially starving yourself. Your body doesn’t know your goal is to lose fat but retain muscle. There’s a healthier way to go about it: lift weights anywhere from three to five times a week and eat a high protein diet.

Amplify Your Results With RAW Burn

During the first phase of a fat loss program, seeing results can occur pretty rapidly. But it’s almost inevitable that you’ll hit a plateau early on due to metabolic adaptations. You could exercise longer and eat even fewer calories, but that can result in losing focus, energy, and, inevitably, motivation. 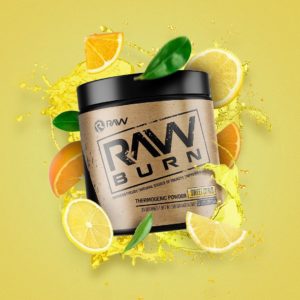 When you reach this point, taking a thermogenic may help kick start your progress! RAW Nutrition has formulated a weight loss aid called RAW Burn. It has everything fitness professionals say is needed to naturally increase energy, boost the body’s ability to burn fat, and dial- in focus, which is especially helpful during intense weightlifting and cardio sessions.

RAW Nutrition is one of the newest brands in the supplement industry. The company launched in 2020 and we’ve already covered several products. Each one, we believe, has something that makes it stand out from the competition. Keep reading for more information about RAW Burn and sign up for RAW Nutrition news and deal alerts down below!

For the best results, RAW Nutrition recommends taking one serving of RAW Burn on an empty stomach first thing in the morning. But if you need extra energy before a workout, you can use RAW Burn as a pre-workout substitute too.

It’s important to note that glucomannan, an ingredient in RAW Burn, thickens after it’s mixed with water. So the company recommends consuming RAW Burn immediately after adding water.

In order to pack as many ingredients in RAW Burn as possible and set the dosages to the clinically-studied amounts, RAW Nutrition decided to go with a powder product. The first two flavors are tropical: Sweet Citrus and Peach Rings

Elevate Your Results With Raw Nutrition

RAW Nutrition was created by two guys who fell in love with helping others, Matt Jansen and Dr. Domenic Iacovone. They’ve been involved in the sports supplement industry for years and have gained the necessary experience to formulate products that actually deliver results. Regardless of your goals or what stage you’re at in your fitness journey, RAW Nutrition wants to show you how big of a difference proper supplementation can be.

Built from the ground up.

Once you’ve nailed down the basics:— training, nutrition, stress management, and sleep— a few supplements, like a pre-workout, protein powder, or thermogenic, can really help you dial everything in. Remember, supplements only work if you do your part, whether you want to build muscle, burn fat, or hit a new personal record in the gym. But no one said it’s going to be easy. RAW Nutrition helps by providing solid products that get the blood flowing and cranks your motivation up to 10.

If your goal is fat loss, then RAW Burn is an excellent supplement to add to your daily routine. On training days, take it pre-workout, and on non-training days, take it first thing in the morning to get you moving. Within a couple of weeks, once your nutrition and training are on point, then be prepared to see significant results.

Subscribe below so you don’t miss out on RAW Nutrition news, deals, or reviews. If you want to try RAW Nutrition’s supplements, check out getrawnutrition.com for samples!