In Episode #052 of the PricePlow Podcast, we interviewed the leadership team at Raw Nutrition, which includes Matt Jansen, Dr. Domenic Iacovone, and their newest partner, Chris Bumstead. They detailed how Classic Physique Mr. Olympia was joining the team, and discussed the CBUM product line launch, which is starting with two products – CBUM Itholate (formerly ISO-Protein) and CBUM Thavage Pre Workout. 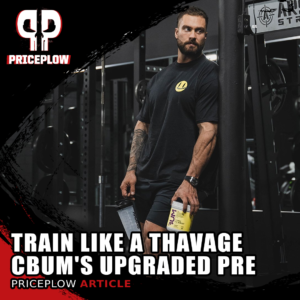 Chris Bumstead’s Thavage Pre Workout has been updated in late 2021 with more tyrosine and a clinically-backed dose of Nitrosigine!

Thavage Pre Workout has 40 scoops with 20 full servings. If you two scoop it, you’ll get a blend of 305 milligrams caffeine alongside efficacious doses of numerous ingredients including Nitrosigine, citrulline, betaine, taurine, and of course, beta alanine.

In the podcast linked above, we learn that Chris personally loves the beta alanine tingles, so you shouldn’t be surprised to see it in his pre. But what we’re also excited to see are some extra energy and focus ingredients from tyrosine, synephrine, and alpha-GPC — this is a very well-rounded pre workout, so we’ve got a lot of work to do below. This article has been updated for the second version of Thavage Pre, updated in late 2021.

The ingredients are covered below, but first, sign up for PricePlow’s Raw Nutrition alerts so we hit you up as news develops:

Below we explain what we get in a two scoop serving of the Thavage – but with 16 well-dosed ingredients, we can’t go insanely deep on each one, so we briefly provide the main purpose of each ingredient first:

Don’t be a bum. Train hard. Sleep harder. Don’t be a pu**y. Take two scoops. Add another plate. Love your mom. No regrets. Stay hungry. Drink your water. Fall in love. Saturdays are for the boys. Dream big. Never quit. Be honest. Take responsibility. Take risks. Dare to lead. Own your sh*t. Get Huge. Get Shredded. Lift more. Run further. Jump higher. Remember to live, laugh, and all that bullsh*t.
Get Raw.
Be a Thavage. 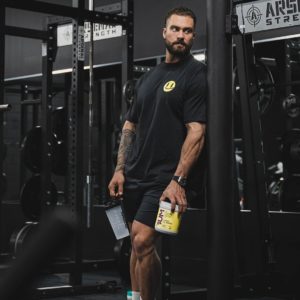 What a way to launch a lineup. Up next, CBUM’s ‘Itholate’!

Now that’s how you formulate a Thavage Pre Workout. There isn’t much more to say about this — we’ve long been fans of Chris Bumstead (learn more about him in our article titled Chris Bumstead: “The Comeback Kid”) — and this formula simply rocks.

With so many clinically dosed ingredients, and the fact that they’re all within reach without overdoing the caffeine, we couldn’t be more proud to see Chris’ partnerships blossom. Joining the dynamic duo of Matt Jansen and Dr. Dom Iacovone, now making it a trio at Raw Nutrition, tells us everything we need to know about Chris’ future in supplements: it’s bright. These formulas will not let you down.

Check it out in our prices below, and get those Raw Nutrition news alerts from PricePlow, since we’re still yet to cover CBUM Itholate next!

Note: This article was originally published on October 24, 2021 and last updated on April 28, 2022 with the addition of Nitrosigine.