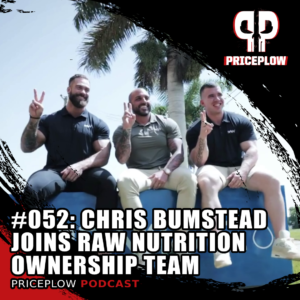 On September 13, 2021, Raw Nutrition announced that they added a new partner to their ownership team — the 2019 and 2020 Classic Physique Mr. Olympia himself, Chris Bumstead!

Chris had already been a sponsored athlete on the Revive MD team, and we covered his story (and his love for Revive MD Kidney) in an earlier athlete profile titled Chris Bumstead: “The Comeback Kid”. Now, however, he’s making his biggest move yet, joining Dr. Domenic Iacovone and Matt Jansen as co-owners of Raw Nutrition!

In this episode of the PricePlow Podcast, we interview the three men and talk about their story, their plans for the brand, and what’s going to happen to Chris’ CBUM product line.

We’re extremely grateful for this interview, since Chris is just 8 days out from Mr. Olympia!

Chris parted ways very amicably with his former sponsor, Jacked Factory. Since they were already in the process of developing the CBUM product line, they decided to share the labels and for the first manufacturing run, both companies would donate profits to two different canine charities, since everyone involved are dog lovers. 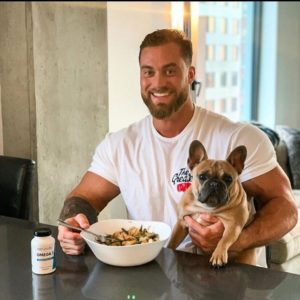 Chris knows how important essential fatty acids are for health, so he uses Revive MD Omega 3!

Upon joining Raw Nutrition, one of his first tasks was to reduce the price of Raw Pre Extreme, which his fans stated was too expensive. Chris actually reads his comments, and wants to pull his community into the Raw Nutrition picture.

Matt and Dom talk about the decision, the collaboration, and how they’ve turned their facility into the elite training crew of this generation.

We’ll also learn about Chris’ supplement stack (he loves his beta alanine, still uses Revive MD Kidney, and has plenty of others to share), learn his favorite snack recipes, get some dog stories, and more.

You can follow Chris on Instagram at @cbum and Raw Nutrition @getrawnutrition, and sign up for our Raw Nutrition alerts below so that you don’t miss any news when the products drop! We definitely expect to have Dr. Dom and/or Matt back on in the future, so subscribe to the PricePlow Podcast too.