In January of this year, we covered RAW Nutrition‘s original preworkout supplement, Raw Pre. It was a very unique pre workout, given large ergogenic doses but low stimulants. At just 100 milligrams of caffeine, it was made for those who were more stimulant-sensitive or wanted to stack with coffee or a mild fat burner.

It was only a matter of time until the brand put out something a little more… extreme: 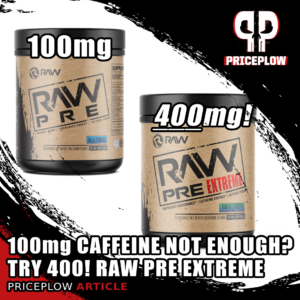 Some of RAW Nutrition’s athletes are going for energy and performance, but not necessarily unwieldy hypertrophy-based pumps. In that case, RAW Pre wasn’t a fit… but RAW Nutrition Pre Extreme is.

At 400 milligrams of caffeine per serving paired with 3.5 grams of beta alanine and 1.5 grams of L-tyrosine, this is for the sprint-style, fast-acting athlete who wants a pop from their pre workout supplement. The pump ingredients are lower, but we are introduced to an interesting arugula extract in NitroRocket that should provide solid source of natural nitrates.

If 100 milligrams of caffeine kept you out of the RAW Nutrition pre workout arsenal, then let’s see what 400 will do for you. The label is below, but first check out our Raw Nutrition news alerts and coupon-based prices: 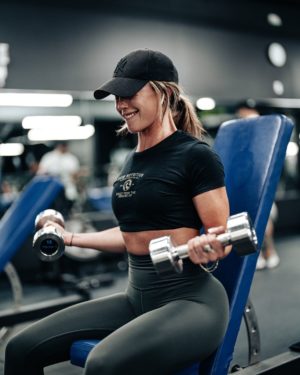 Covering RAW Nutrition and Revive MD keeps us extremely busy, as the two brands run by Dr. Domenic Iacovone and Matt Jansen keep the products and flavors coming. We admittedly missed this one, but better late than never.

With Raw Pre at 100 milligrams of caffeine, we had a feeling that a few of the stim-driven athletes who use their products would pester them for something a bit… stiffer. There’s always the Raw Ignite fat burner, but for those who want a stronger powder than capsules, Raw Pre Extreme is the answer.

NitroRocket is a new ingredient to the PricePlow Blog, and is one we’ll be following. With a general mindset that “meat is food, plants are medicine”, we love when companies can pull incredible things out of our favorite leafy greens.

If you’re looking for high-caffeine, high-endurance, and some arugula-powered pumps, take a look at Raw Nutrition’s Pre Extreme.