Over the last year, the pair of “brotherly brands” in Revive MD and Raw Nutrition have brought us some incredible supplements. With the health-minded Revive MD and the sports nutrition centric Raw Nutrition, each brand has its own way of approaching different categories.

Today, we’re going to approach sleep, with the new aptly-titled Raw Nutrition Sleep supplement. This is a flavored sleep aid powder that comes in a five gram serving size, allowing us enough room to add vitamins, minerals, herbs, and other sleep-inducing compounds. 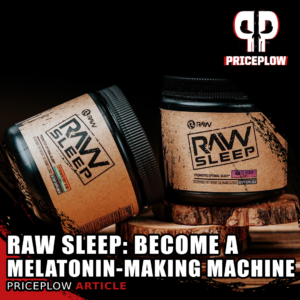 Trouble producing melatonin and getting to bed on time? Fight it with Raw Sleep!

One of the core themes with Raw Sleep is that it’ll help you generate more melatonin, given its inclusion of tryptophan, vitamin B6, and vitamin C — as well as melatonin itself. It also has minerals in the form of magnesium and zinc, in highly bioavailable forms. To top it off, we have some herbs in the vastly-underrated lemon balm, a well-absorbed ashwagandha, and newcomer hawthorn berry. This is quite a unique sleep supplement.

Sleep hygiene is always most important – put that phone down before bed and do what it takes to reduce stress. If you’ve taken too much pre workout or having too much trouble getting down for sleep, and enjoy the effects of quality melatonin production, then get ready to dive in with Raw Sleep:

Here’s what you’ll get in each five gram scoop of Raw Sleep:

Finally, let’s not forget Vitamin C, which is also used to help generate melatonin, and is a great overall antioxidant to have around.

This is a powder so you get a choice of flavors, and Raw has had some great-tasting supplements lately:

Raw Sleep: Turn your body into a melatonin-producing machine 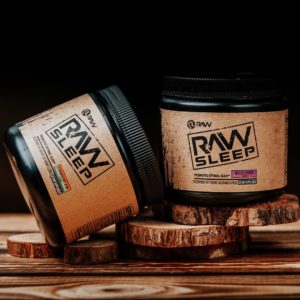 Get better sleep with Raw Sleep

It goes without saying that you’ll want to stop yourself from preventing its production — turn off your phone, read a paper book, and get to bed at the same time every night. But before you do that, 30 minutes before going to bed, take some Raw Sleep, and see if you can do it without drinking too much water!

This is a unique supplement: lemon balm is always underrated, everyone with sleep issues should get into magnesium, NooGhanda should feel great, and Hawthorn is our sedative wild card that we’d love to try on its own.

Today, we also learned that zinc is great for sleep, but nobody knows why — and it seems like scientists have more or less stopped trying to figure it out, just accepting it as truth and moving on with bigger and harder problems since there are so few downsides to taking some extra supplemental zinc.

If you’re into melatonin, this is one to try, and it should stack incredibly well with any of Revive MD’s other supplements or Raw Test.