Zinc is an essential mineral that has a multitude of biological roles in the body. In the ongoing “immunity crisis” that began in 2020, zinc supplementation gained steam, as it’s well-known that supplementation of various forms of the mineral (especially at high enough doses) reduces symptoms of the common cold.[1-11]

With those results, it’s no surprise that nearly every company put out either a zinc supplement or a zinc-based immunity supplement in the past year – likely both. This proved fruitful, since there was a very strong correlation between healthy zinc status and successful recovery from the novel virus at hand,[12-14] a solid improvement when used in early treatment (often alongside other antiviral drugs),[15,16] and even a fair amount of success when used in late treatment.[17,18] 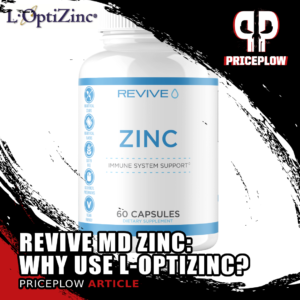 Revive MD’s Zinc is out, and it brings 50mg elemental zinc from OptiZinc (zinc monomethionine). They explain the decision lower down.

The questions for a supplement brand’s formulator come down to what type of zinc to use and at what dose.

Revive MD is a supplement brand founded by Dr. Domenic Iacovone and Matt Jansen, and it’s become well-known for their upheaval of the health segments in the sports nutrition industry. The team has brought standards up in the industry thanks to their incredible formulas status as a third-party lab-tested brand that is safe for drug-tested athletes to use.

Revive MD already has an Immune Multi, but many of their users wanted higher-dosed zinc that’s also third-party tested and trusted. In response, the team chose an extremely high bioavailability zinc ingredient – OptiZinc – and put enough in to yield 50mg zinc in their new Revive MD Zinc supplement.

In this article, we get into some other benefits to zinc supplementation (it’s not just about immunity!) and discuss the differences and specific research on OptiZinc. Before that, you can compare our coupon-powered prices on Revive MD Zinc and sign up for our alerts:

What is zinc? It’s not just about immunity 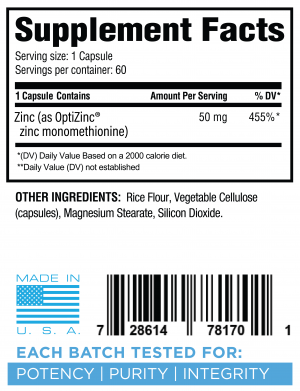 Zinc is an essential dietary mineral that plays a significant role in our body’s chemistry. It’s often used as a catalyst for other reactions. In fact, it is the second-most abundant trace mineral within the body.[19]

Highly bioavailable zinc is most commonly found in meat and eggs, with oysters being a very good source of the mineral. The issue is, diets have trended away from meat and eggs, and oysters aren’t exactly household foods these days. Plant-based diets are on the rise, and legumes technically have a good amount of zinc, but they’re not always first on the menu. On the plant-based front, certain legumes also have high zinc content, but it’s generally of lower bioavailability because legumes (and grains) contain phytates that inhibit zinc’s absorption.[20,21]

This trend may be leading to a low level of zinc deficiency, which must be supplemented around. But not all zinc supplements are the same, and it’s best to use a high bioavailability zinc.

Benefits of Zinc supplementation: Immunity and beyond

In the introduction, we already touched upon zinc’s usefulness against cold viruses,[1-18] especially when paired with a zinc ionophore, a combination that can impair the replication of various RNA viruses, including poliovirus and influenza.[30]

But first, some additional immune benefits 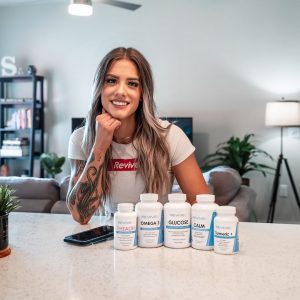 Looks like Savannah’s got one more mineral supplement to add to her Health Stack – zinc!

Zinc has a critical role in the proper functioning of important immune cells such as natural killer (NK) cells, neutrophils, and macrophages.[26] Each of these are key components of the innate immune system, which identifies cells that have been infected and destroy them through apoptosis (cell death) or phagocytosis. This is done to ensure infected cells cannot harm other cells.

Inversely, when zinc deficient, the body cannot proliferate T-cells and B-cells.[26] These are involved in the adaptive immune system, which helps the body build immunity via antibody creation. Finally, zinc is an antioxidant that can support cell membranes and protect them from damage caused by free radicals.[26]

However, most of Revive MD’s customers are generally healthy athletes looking to be their best, so we’re going to slant the rest of the article towards some of the benefits that may lead to better performance, and then get into OptiZinc itself.

Given zinc’s abundance throughout our systems, the benefits of supplementation (i.e. the benefits of not being deficient) span several health systems. Below is a list of research where the effects are consistent:

This isn’t necessarily stating that every person taking zinc is going to be happier with better testosterone and T4 levels. Rather, it’s better to say that we often see improvements in the above metrics when correcting deficiency.

The studies above overwhelmingly demonstrate that supplemental zinc is paramount in the face of deficiency. But why did Revive MD choose OptiZinc zinc monomethionine, especially when their Immune Multi uses a different form of zinc known as zinc bisglycinate?

It turns out that both versions use similar technologies – OptiZinc zinc monomethionine is a chelated form of zinc that is bound to the essential amino acid, methionine. Alternatively, the zinc bisglycinate in their Immune Multi has zinc bound to the amino acid glycine.

Both work similarly, in that they are amino acid complexes. The reasoning (which is backed by data) is that our small intestines are not that great at absorbing straight minerals. They are, however, excellent at absorbing amino acids. So what these companies have done is to bind targeted minerals (in this case, zinc) to amino acids in order to “Trojan Horse” them into the system. The body works to absorb the methionine (or glycine), and the zinc comes along for the ride, entering the bloodstream.

Differentiating the different OptiZinc forms and their patents 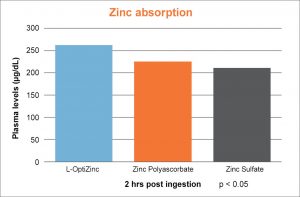 Just say no to zinc oxide

Back to the OptiZinc vs. zinc bisglycinate debate, both are vastly superior to other forms of zinc on the market — especially zinc oxide, which has awfully low bioavailability[66-68] (and in some humans, no absorption)[66] and should thus be shunned from the market.

Revive MD on the OptiZinc choice

The question is, why OptiZinc over bisglycinate? We bring in the ringer, Revive MD’s Chief Compliance & Formulations Officer, William Wallace, to answer that question, since both are great forms:

“To our knowledge, there is no pharmacokinetic data available comparing equivalent doses of zinc monomethionine (OptiZinc) or zinc bisglycinate chelate in the same model. However, when cross-referencing human and animal data, we can conclude that these two likely have similar bioavailability and AUC over a 4 hour period after a single administration. 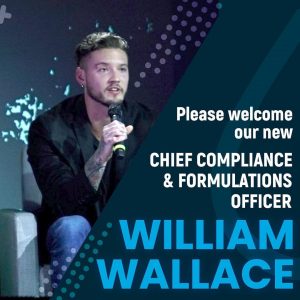 Welcome William Wallace to Revive MD, their new Chief Compliance & Formulations Officer. It’s a great day when he graces our blog with a blockquote.

Further, zinc monomethionine has more data suggesting that its antioxidant properties (i.e. ability to reduce superoxide anion and hydroxyl radical accumulation in cell models) are superior to other zinc supplements (gluconate, picolinate, sulfate, oxide, and citrate). Currently, we are not aware of data showing similar antioxidant potential of zinc bisglycinate chelate. Although we are not claiming that this property is not matched in the TRAACs version, we thought that the more robust history of research with the monomethionine version gave this one a slight edge when it came to an affordable standalone zinc product.” 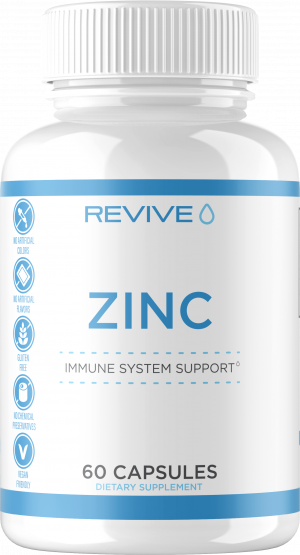 Are you sold on OptiZinc?

It’s worth a reminder that Revive MD Zinc provides 50mg elemental zinc — not 50mg OptiZinc. It’s critical to note this on labels to avoid over- or under-dosing your supplements. Since zinc monomethionine is roughly 21% zinc by weight, we need 238mg zinc monomethionine / OptiZinc to get our 50mg dose.

Read labels carefully, because all zinc supplements are bound differently, and we’re generally looking to supplement 30-50mg zinc per day. Revive MD, being a brand for hard-charging athletes, is on the higher end of that scale.

On top of their status as a BSCG-certified company for drug-tested athletes, we love the way Revive MD formulates and provides reasoning for their formulations.

In a perfect world, we wouldn’t have to concern ourselves with finding quality zinc supplements. Mineral-dense food such as red meat, eggs, and shellfish should be able to take care of it. But we live in a world with nutrient-scarce processed foods, novel cold viruses, cheap zinc oxide supplements, and non-stop fear mongering without mention of metabolic health and appropriate eating.

In the state of today’s society, it’s great that we can count on companies like Revive MD to provide us with the tools to live in it as well as possible. When it comes to immunity and virility, one of the first things we check is one’s zinc status, and Revive MD has us convinced that OptiZinc needs to be in the conversation more often.