5% Nutrition has kept us busy lately, with the uniquely-formulated 5% Core Series that goes beyond single-ingredient formulas, the new Shred Time and Stage Ready diet stack, and even the limited-edition return of their Starry Burst All Day You May flavor.

But when it comes to 5% Nutrition — and Rich Piana especially — we often think about regimens that are a bit outside of the regular supplement wheelhouse. No, not synthol, but some of that exogenous hormonal support. 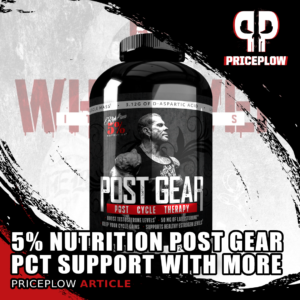 5% Nutrition Post Gear is a PCT Support Supplement that has a few new things and should bring you a few very fun weeks – even after the cycle’s over!

Pharmaceuticals are outside of the scope of this site, and pharmaceutical enhancements on-cycle often require pharmaceutical protection post-cycle. However, there are supplements that can help us keep our hormones in range (as much as possible) while still protecting the liver after the cycle is over.

To help with post cycle support, 5% Nutrition has launched Post Gear, which is aptly named because… you take it post gear! We want to again emphasize that this isn’t the only thing you’ll take post gear, but it includes several natural dietary supplement ingredients that can help your body get back to natural testosterone production while protecting the liver as an adjunct post cycle therapy.

This question was first to come up for us, so it’s worth answering immediately. YES, but:

Both are great, but Post Cycle has a bit more in terms of testosterone maximization (leaning heavily on D-Aspartic Acid) and estrogen control (with some new ingredients covered), while Liver & Organ Defender is all about organ protection.

With all of that disclaimed, let’s get into Post Gear:

In eight capsules, you get the following ingredient doses: 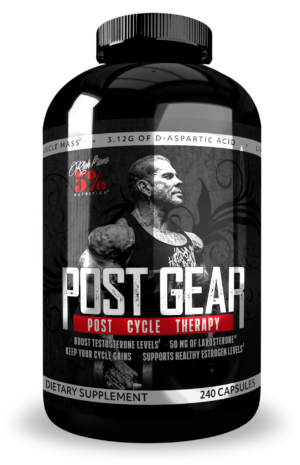 So it’s fine to stack them both at post-cycle time if you have the budget – we’d never say no to some of the ingredients like NAC in Liver & Organ Defender.

This is an all around great formula with a few new additions that bets big on Brassaiopsis Glomerulata for estrogen control and a few solid weeks of DAA. We’re consistently impressed by 5%’s formulations lately. We’ve seen far too many “me too” estrogen control supplements, yet this is a total post-cycle supplement that does more than those supplements in that department alone, yet brings liver and testosterone support as well.

Our opinion on DAA has been very consistent – it’s not what it was originally marketed to be, but it will give you a few awesome weeks. That’s just what most folks need when grabbing a bottle of Post Gear. It does need high doses, but if 8 capsules per day is too much for you, then you’re probably in the wrong game.

Finally, we’d like to point out one last time that pharmaceutical measures often require pharmaceutical support, and this is a supplement to add to that. Be smart, get your blood work, and do whatever it takes to keep your strength high post cycle.