Tongkat Ali: Get your Long Jack Back

Plant-based herbal medicines have a very long history of use. Occasionally, some of them get re-introduced to the Western world, mixed with our modern science, and the results are nothing short of fantastic.

Curcumin is one such natural compound we’ve discussed (for joints). But when it comes to male virility and muscle-building, none have been underestimated more than Tongkat Ali, especially when extracted properly.

This is a long and thorough article. Here are the major points:

What is Tongkat Ali? 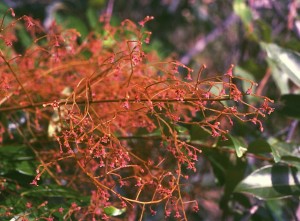 Eurycoma longifolia Jack, otherwise known as Tongkat Ali, is a plant native to South-Eastern Asian countries and is one of the more popular herbal plants. It’s also known as Malaysian Ginseng and Longjack, but Tongkat Ali is the most common term used for it here in the states. In Malaysia, Ali translates to “walking stick”, which is a reference to the plants long twisted roots.

Tongkat Ali has been used for a variety of different reasons. It is commonly used to

The roots of the plant contain several compounds which may have sexual and testosterone enhancing effects. These compounds are what supplement companies typically extract out of the plant for supplemental use, and that will be the focus of this paper. Not all extracts are equal.

The primary bioactive compound in Tongkat Ali is believed to be the quassinoid compounds. These are a group of natural chemical compounds classified as diterpenoids and triterpenoid structures.

Quassinoids are bitter principles found in plants that are in the Simaroubaceae family.[3-5] Several quassinoids have been isolated and identified in Tongkat Ali.[6] The most promising of these include eurycomanone, eurycomalactone, euryconolactone (A-C), eurycomanon, and eurycomanol.

Of these, eurycomanone and eurycomanol are believed to be the main bioactive quassinoids. [7] However, currently no relevant studies specific to exactly which quassinoid is the one responsible for the effects some experience from Tongkat Ali supplementation. Despite this, some supplement manufacturers do extract specifically for quassinoids or glycopeptide fractions. 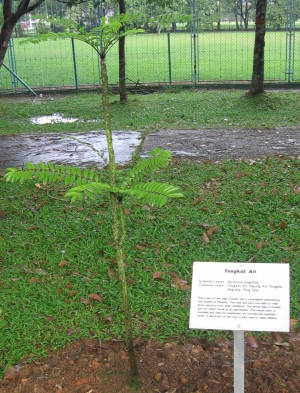 You can see why Tongkat Ali translates to walking stick, as shown at the Singapore Science Center. Image courtesy Wikimedia.

Glycopeptides are a form of bonded amino acids chains and like quassinoids, are promising but at this time no relevant specific studies have been done on them.

The most promising extract of Tongkat Ali is LJ100. This extract is a 100:1 patented blend consisting of the two more promising bioactives, eurypeptides and glycosaponins, in a 22% and 40% ratio respectively.[8]

Our interest in this often-overlooked herb peaked with the release of Nutrex Research’s Tested – a Tongkat Ali formula that contains just the potent extract and is backed up by a nice dose of the mineral boron, which also assists with free testosterone.

The studies behind it were quite impressive, and the more research we did, the more impressive it became. What you’re left with is this article here, and we get more into the details of this product in our Tongkat Ali supplements section later on.

Bonus info: Eurycomanone is a unique Quassinoid that only exists in Tongkat Ali (so far as we know). Therefore, the industry uses this as a fingerprinting test to determine whether what you purchase is the species of Eurycoma Longifolia.

In some countries, it has traditionally been used as a tea to treat various ailments such as headaches, fevers, and ulcers. In addition to this, it is believed to be anti-tumor and antimalarial,[9] but research here is limited and beyond the scope of this article.

In Indonesia it is called Pasak Bumi and is used as a treatment for dysentery and malaria.

While its use does vary from country to country, in Southeast Asia it is almost universally used as an aphrodisiac and to treat impotence – that much is basically undisputed, as you’ll see in the research below. This is the more traditional role of Tongkat Ali use by humans.[2]

But here in the states, the plant extract, especially the roots, are commonly used for enhancing libido & testosterone levels in men, as well as body composition changes (both muscle gains and fat losses).

Where has this stuff been all my life?!

For a natural extract, the benefits are downright ridiculous, which leads us to wonder why it’s taken the sports nutrition industry so long to jump on board. The answer to that question leads us to the next section: product quality.

When it comes to the tongkat ali supplements available for purchase, product quality has historically been a serious issue. Products just never seemed to work as well as indicated in the research studies cited above and below.

The story behind Tongkat Ali scams, and the birth of a real extract

Some suppliers have claimed 100:1, 200:1, and even 400:1 extracts. But when asked “What kind of alcohol is used in the extract?”, you get generic (and slightly frightening) responses like “The kind they use in the hospital”. That doesn’t make sense, however, because that potent of an alcohol-based extract would potentially have toxic levels of quasinnoids!

So toxicology tests were then requested for safety reasons. At that point, the supplier then admitted defeat: “Do not worry – the 400:1 extract is actually a 5:1 extract”. They hate it when you actually know what you’re talking about.

It gets worse before it gets better

Meanwhile, there are other scammers that sell 1:50 and 1:100 extracts — note that this is a reverse ratio – the numbers are backwards!! In these cases, you’re getting 1 part extract, 50 parts maltodextrin! Yet another scam!

Then, to top it off, other prominent contract manufacturers are supposedly using raw root powder and simply selling it as extract. We cannot publish findings, but a 20:1 extract was found to be 1 part extract, 8 parts maltodextrin.

With that discovered, HP Ingredients created LJ100, and we recommend Nutrex Research Tested capsules due to their strict testing (it’s Informed-Choice tested for banned substances) and overall value.

Unfortunately, the behavior of a few dishonest companies and suppliers tarnished the ingredient’s entire reputation for a while. That story is told in the sidebar to the right, but out of that mess came LJ100, which was formulated after too many scam extracts appeared on the market, misling both consumers and the honest supplement brands we enjoy working with.

LJ100 has more human research behind it than any other extract (much of it cited in this document), and was created by the original researchers at MIT and University Malaya. It was born out of near necessity by HP Ingredients[26], as discussed to the side.

Of the companies selling LJ100, Nutrex Research is by far the one with the most professional experience and trust in the community.

There are two things that set them apart:

You can compare prices on this product below, or sign up for price drop updates to catch the next hot deal:

You can also read more on our LJ100 article for more information. 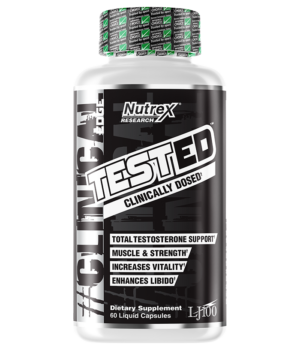 The clinically-dosed and drug-test approved Nutrex Tested has a smashing dose of 200mg LJ100!

As always, stick with the dosing instructions on the product you buy, and first get written consent from your licensed medical practitioner before beginning any dietary or supplementation program. These statements are not approved by the FDA.

While an optimal dose is still unknown, the typical dose of Tongkat Ali extract ranges from 200-400mg per day.[27] This is true for the LJ100 100:1 extract, which has the most research behind it.

Doses are normally recommended to be administered to men in 1-2 doses throughout the day.

In terms of Nutrex Tested, the instructions are to take two capsules in the morning and two capsules at night. On training days take two of those capsules one hour before exercise if you can (the other two capsules would be on the opposite end of the day.

However, manyg often cycle it by taking it for five day on, followed by two days off, then repeating the process. This lengthens the effective time and allows your body to continue with its own testosterone production.

In terms of some other products, the maximal acceptable daily intake of Tongkat Ali is up to 1.2g/60kg adult/day, but that was with basic water-based extracts and such a dose would be far too much if using a quality extract.[28]

Are there any Side Effects? 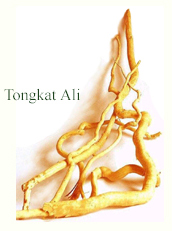 While human data is limited, Tongkat Ali supplementation is considered safe if taken in a reasonable manner. A recent study concluded that Tongkat Ali may even be a safe alternative to testosterone replacement therapy![29]

Recent animal study concluded that Tongkat Ali appears to be safe as a treatment for male infertility and general ageing male problems.[30] However, at very high doses, Tongkat Ali supplementation may result in deleterious side effects.[31] In rats, the LD50 for Tongkat Ali has been reported to be >5000 mg/kg.[32]

In one study using humans, up to 600 mg/kg of Tongkat Ali did not result in any negative effects.[33]

But again, don’t be stupid or overly aggressive: used a trusted product (not some knock-off crap you see on Amazon), follow the instructions on your bottle, and always do so under the guidance of your doctor.

When used appropriately, Tongkat Ali seriously may just bring your Long Jack back.