Posted on April 22, 2021 by Mike Roberto and Dave Taylor | No Comments

5% Nutrition’s “Go big or go home” philosophy is on display with their newly-launched Core Line. “Core Series” supplement lineups are common in many brands, who use them to deliver additional standalone ingredients to bolster their supplement stacks. However, in these formulas, 5% Nutrition has amplified them, making them more than just single-ingredient formulas. 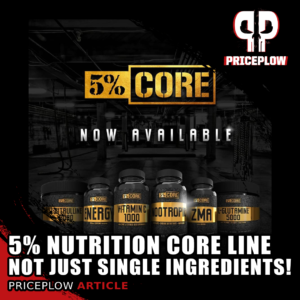 The 5% Nutrition Core Line is out, and they’re not just single-ingredient formulas! Check out these simple yet unique spins on classic supplements that differentiate themselves from the competition.

The lineup consists of L-Citrulline 3000 with added glycerol powder; ZMA with added boron; Nootropic that has both a choline source and a choline-protective ingredient, L-Glutamine 5000 with L-alanine and N-acetyl; Vitamin C 1000 with zinc and citrus bioflavonoids; and an Energy formula with 250 milligrams of caffeine but in a very unique blend.

The theme is that these are not single-ingredient formulas, they’re synergistic blends to give you what you’re really looking for sometimes, without having to take multiple products.

This ingredient-packed performance lineup is designed for seasoned weightlifters and hardcore strength enthusiasts looking for an opportunity to tailor their supplementation to increase performance and recovery. But it’s also for beginners and anyone returning to the gym after a hiatus and looking to improve overall health.

5% Nutrition consistently strives to provide weightlifters, strength enthusiasts, and athletes with products that will take their workouts to the next level — and this Core lineup will do just that. As we said with the Kill It Reloaded pre workout, we the brand keep Rich Piana’s legacy going with supplements he’d be proud of – and this Core series is right in line. You couldn’t see Rich Piana just putting out a plain old glutamine formula, could you?!

You can read all about each product and their ingredients below, but first sign up for PricePlow’s 5% Nutrition news:

Now let’s get into each supplement in 5% Nutrition’s Core lineup.

Once again, Rich Piana would be proud. We don’t need yet another standard L-Glutamine supplement, and we haven’t for years. It’s great to support our favorite brands and get our support supplements all in one order, but if you’re going to do something, do it uniquely and effectively.

Not your average “core” series!

5% Nutrition does just that with their Core Line – solid formulas that aren’t just single-ingredient formulas. While Nootropic and Energy are the two standouts, we enjoy seeing glycerol next to a nitric oxide booster in citrulline, and also think alanine is worth looking into when considering glutamine.

Would you expect anything different from the brand behind Crea-Ten, the creatine supplement with TEN different forms of creatine?!? You didn’t forget about that one, did you? Because when it comes to the Core Line, we must pay homage to Rich’s original core supplement – the most interesting creatine on the planet. This is the way he wanted it.