5% Nutriton Crea-TEN: TEN Types of Creatine in One Legendary Tub

Over the past year, we’ve been covering the transition of 5% Nutrition’s supplements to their white “Legendary” labeling series. This included the ALL DAY YOU MAY amino acid feeder, the Kill it Reloaded pre-workout, and most recently, the Mentality energy nootropic. 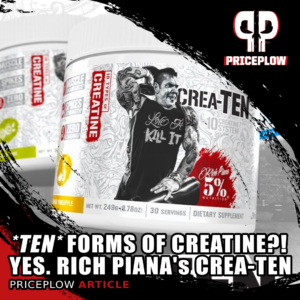 Now it’s time to update an article from 2015, when we first detailed Rich Piana’s already-legendary creatine supplement: Crea-TEN. It’s now updated with the white labeling, but still has the same epic creatine strategy:

That’s right – this is the Rich Piana way. When the industry’s most prominent renaissance man of the 2010s put out a creatine supplement, he wanted something different, and something that could be used by those who don’t have great results with creatine monohydrate alone.

Rich and his team came up with the most creative creatine supplement to date: Crea-TEN, which included ten effective forms of creatine (totaling 5 grams) and a creatine acceleration blend to get it where you need it to go – into muscle tissue to generate more ATP.

This is also one of the few products to utilize creatine pyruvate, an underrated form that we’ve recently become excited about.

The formula is detailed below, but first check all of the deals and flavors available through PricePlow:

The benefits of creatine

Before getting into the details, we should briefly cover many of the studies that have been conducted on creatine over the years. What was once “controversial” in the late 1990s is now simply taken for granted: creatine works wonderfully and is incredibly safe.

It’s all about ATP 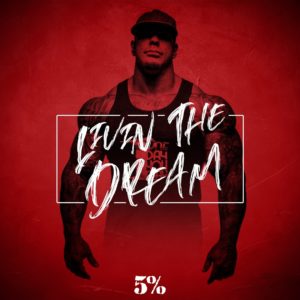 Live the dream, and live it big by eating right and supplementing around the gaps

First, the mechanism: creatine works by providing a critically-needed phosphate group to help your body produce more cellular energy. The adenosine diphosphate (ADP) molecule takes the added phosphate and makes it into adenosine triphosphate (which is also known as ATP)[1-4] — ATP is the main “currency of energy” for our cells. Our cells care about ATP, not calories, and creatine makes it easier for us to produce more ATP.

When you’re low on ATP, or unable to produce it, performance and energy are greatly diminished. Without creatine taken through diet (mainly meat) or supplementation, the body must go through costly and energy-consuming processes to make more.[5]

The broad implications of the above mechanism explain why creatine’s benefits are so wide-ranging, going far beyond muscle building and athletic performance (although that’s the primary focus of this article): 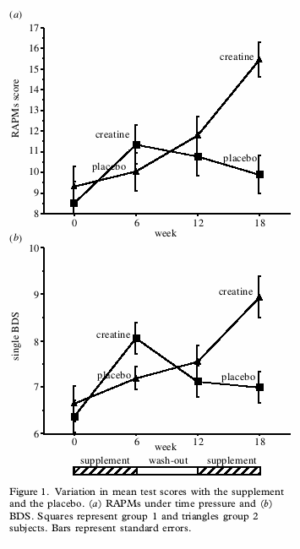 Creatine doesn’t just rev up your body: it also has clear benefits for your mind

There’s so much research available that many of the effects have been verified through rigorous meta-analyses:

Creatine is one of the numerous compounds (alongside carnitine, choline, and various active vitamins and minerals) that vegan and vegetarian diets are missing, causing their diminished performance, virility, mood, and cognitive function.

While supplementing creatine is great, we should really cover its natural sources and then see how much we should supplement:

Long story short, creatine is found in meat, generally muscle meat. If you want to build muscle, you need to eat muscle — there’s more than just protein in there. Beef is the best source, with about 2-2.5 grams per uncooked pound,[25,26] while chicken has about 1.5 grams per pound.[27]

This is why the original black tubs of Crea-TEN had an image of Rich Piana eating a massive raw steak!

How much creatine to get? 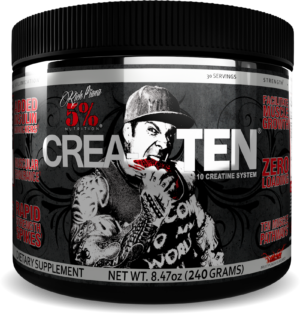 There’s a reason why the original Crea-TEN tubs showed Rich eating a raw steak: creatine is found in copious amounts in red meat!

Your number will depend on two things: your size and your diet. The average male generally excretes about two grams of creatine per day — we’ve seen 1.6-1.7 grams per day in studies,[28-30] but 2 grams is a safe number to choose for 5% Nutrition athletes. Women lose a bit less each day.[28]

However, simply taking 2 grams per day may not get you to saturation or into athletic performance potential, which is why 3-5 grams per day has become the key dosage that covers nearly any dieter and athlete size. Rich Piana, of course, chose 5 grams.

We’ve gone on the record stating that we consider creatine to be an essential vitamin – we need to maintain levels and keep them high, and would generally consider 3 grams to be our “100%”. Unsurprisingly, 5% Nutrition goes above that.

Now let’s get into Crea-TEN: 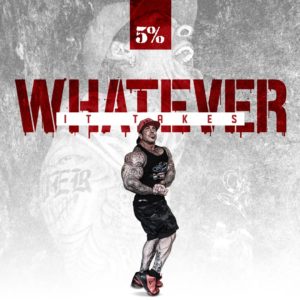 Whatever it takes to keep creatine at saturation!

Typically, you can take creatine any time of the day. Some people like it first thing in the morning, others like it post workout, and still others just get it into their pre workout. It doesn’t matter, just do what works best for you on a regular basis.

With the creatine accelerate blend providing a good bit of glucose disposal support, you could also consider taking this before a carbohydrate-containing meal – it may work very well in a post-workout state before crushing your post workout carbs.

If you eat enough meat and are on a budget, you can take an “underwhelming scoop” to save some money and make that tub last longer… but for most 5-Percenters, you’ll want to full scoop this bad boy.

Crea-TEN is a Rich Piana Classic 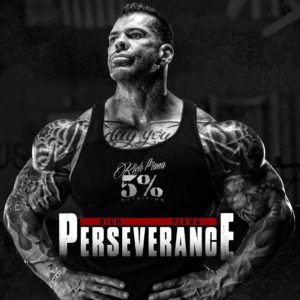 The man’s legendary status would have persevered regardless, but 5% Nutrition is keeping the classics where they belong

We’ve always loved Crea-TEN, if for no other reason that Rich Piana educated us about creatine pyruvate with it. The discussion is similar to the one we recently had regarding Kill It in our article on the Kill It Push Pop flavor: yes, it’s a proprietary blend, but it’s one that we wouldn’t mess with. Reason being, this was a classic Rich Piana supplement, and we don’t want 5% Nutrition to tinker with the late legend’s vision.

Besides, we’re getting five grams of creatine ingredients – and that’s what truly matters. Everything else is icing on the cake. Overall, we’d still suggest finding a way to get more betaine into your day, and that can be done with Kill It Reloaded, and then you’re off to the races.

So to answer the introductory question, ten forms of creatine?! The answer is yes: Crea-TEN is Classic Rich Piana and it has to stay that way.