It’s been over six years since we wrote our original article on Rich Piana’s KILL IT, the legendary OG pre workout supplement from 5% Nutrition. With a bottle and label to match the name, this formula has gone unchanged the entire time, keeping Rich Piana’s vision and legacy alive. 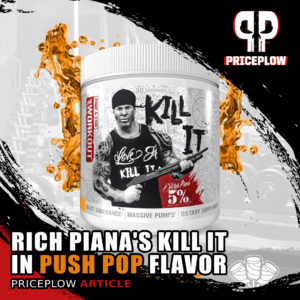 An unmistakable throwback to those orange & cream push pops from childhood!

Rather than tinker with the KILL IT formula that uses a now-modest 250 milligrams of caffeine per serving, 5% Nutrition has instead made other higher-stimulant pre workouts (such as Kill It Reloaded and 5150), but has bolstered KILL IT with fresh new flavors. The latest of which we discuss today:

KILL IT in Push Pop flavor!

With a menu of a half-dozen killer flavors, the latest is quite possibly the best, especially if you like orange creamsicles: KILL IT Push Pop!

In this article, we quickly recap the social media supplement king’s pre workout supplement, discuss the flavor, and show the other flavors it’s up against. But before that, make sure to sign up for our 5% Nutrition news alerts, because our article on FREAK SHOW is coming next!

5% Nutrition released this a little bit ago, but wanted PricePlow Nation to know one simple thing about this flavor – it’s fantastic:

“The Push Pop flavor tastes like a melted down Push Up. It’s absolutely delicious.”

5% Nutrition Pre Workout Comparisons: How much energy do you want?

KILL It has 250 milligrams of caffeine per serving, which was more aggressive at the time of launch, but a bit more tame as we’ve all become more caffeine-addled and sleep-deprived. Compare this to the other 5% Nutrition pre workout supplements in the image below and read our article titled Which Rich Piana Pre Workout is for You? to see where you stand:

Now let’s quickly cover this formula and see the other flavors:

While 5% Nutrition has a non-proprietary blend in KILL IT Reloaded, this one is the same as they’ve always been – and at this point, we hope it never changes. We’re usually all for open formulas, but let’s let Rich Piana keep this one to himself: 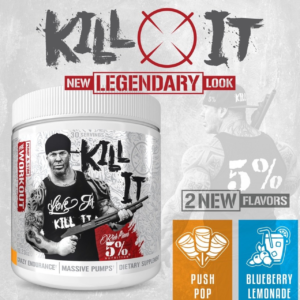 KILL IT still kills it – especially in the flavor department 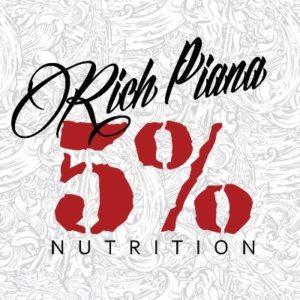 We came for the new Push Pop flavor, but we stayed for a ride down memory lane. 5% Nutrition has four pre workout supplements (three of which have stimulants) – far too many for most brands, but right on point for the brand behind the Rich Piana namesake.

With 5%, you can go from zero stims to tons of stims – and KILL IT is actually the lower-caffeine option of the stim-based bunch.

Hopefully, this formula is here to stay, but with new flavors to keep the tradition alive. If you miss those push pops from your childhood, or simply want an incredible orange creamsicle flavor, Rich Piana’s got you covered.