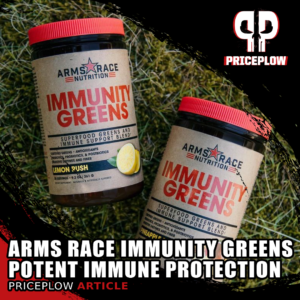 Looking for a vastly different kind of Greens Powder that has real immune-boosting ingredients? Arms Race Immunity Greens may be what’s on tap this fall/winter!

There’s no other way to put it – this greens supplement is different. And if you’re looking for immunity, this could be the one.

Immunity Greens ditches the standard spirulina and wheatgrass style greens supplement, instead opting for vegetables and key immune system boosting ingredients such as EpiCor and elderberry, fronted by psyllium husk fiber rather than the usual inulin prebiotic we’ve been seeing. Natural vitamin and mineral sources are included, but there are also high-quality, chelated minerals like zinc and copper included too. Probiotics and digestive enzymes are added for good measure as well.

A different kind of greens formula

Basically every decision made here is different from what we’ve seen with other greens supplements, so if you’re looking for something different, read on. But first, take a look at PricePlow’s Arms Race Nutrition news alerts, we still have more to catch up on with team ARN:

Be prepared for a vastly different kind of greens supplement here. Arms Race isn’t going with your standard “spirulina, chlorella, and wheatgrass” greens powder supplement here, so if you’re looking for something unique, this could easily be the one. The fiber source is different, and there are a few well-researched immunity ingredients as well.

Immunity Greens launched in two flavors, but keep an eye on the list below in case there are updates: 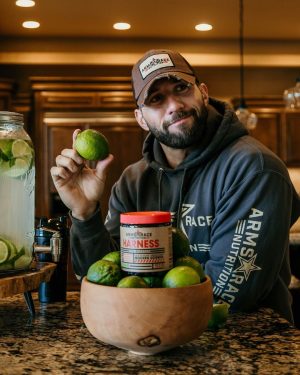 Many greens powders talk about immunity, but don’t use actual research-backed immunity ingredients. While we believe in the idea that “meat is food, plants are medicine”, we love to see ingredients that were studied for this targeted purpose. Adding EpiCor and Eldermune to a greens powder is enough on its own, but Arms Race goes even further by approaching the gut health axis as well.

The wheatgrass and spirulina supplements out there are great, but if you’re looking for a left turn and some key added ingredients, Immunity Greens is a very unique play. This is especially true with the usage of psyllium husk as the base ingredient.

The combination of Arms Race Clarity and Immunity Greens could be one of the most unique and underrated mental and physical support supplement stacks there are. If you’re getting ready for a nasty flu season, which we’re likely to have, this is a great supplement to a metabolically healthy diet.