UNBOUND has officially burst onto the supplement scene, with “exciting” being the best word to describe the launch. Prior to the big unveil, everyone in sports nutrition wondered who was drumming up all this intrigue. The inauguration — complete with a drum containing all six flagship supplements — validated the hype. It was revealed that CEO Mark Glazier and his team at NutraBio were the ones behind Unbound, and it all made sense. Their experience, knowledge base, and drive to innovate are woven through the fabric of this new endeavor. 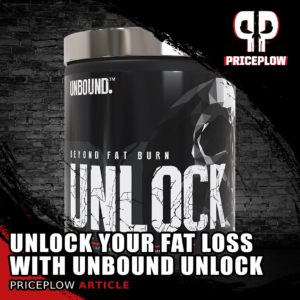 UNLOCK your fat loss with this potent fat burning drink!

Now that we’ve covered both Unbound’s pre-workouts — the heavy-hitting, euphoric UNLOAD and the powerful, pump-inducing non-stimulant formula UNBENT — it’s time to discuss one of the most exciting, powerful formulas in the entire product line.

It is time to UNLOCK your fat loss

Just like its pre workout brethren, UNLOCK also happens to be one of the most comprehensive, potent supplements in its category — this time fat burning drinks. This fat-incinerating formula is absolutely loaded — 11 active ingredients, six of which are trademarked products from leading formulators — and ready to help unlock the next level of fat loss for those deep in the throes of a diet.

Before we get to this stacked label, make sure you’re subscribed to PricePlow for the latest news and deal alerts so that you can stay up-to-date on all things Unbound. Also, head over to our social feeds on Instagram, YouTube, and Facebook, for daily content on new products, supplement reviews, and some informative Q&As! 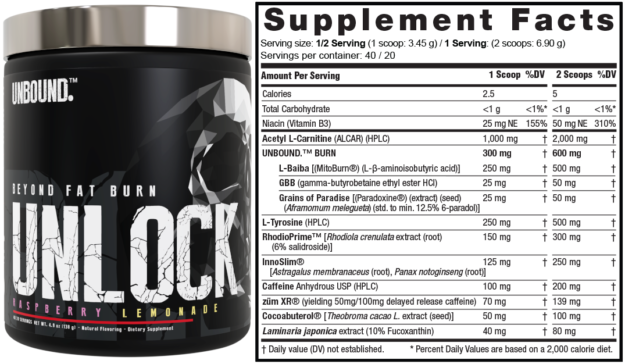 Here’s what you get get in each 2-scoop serving:

We’ve seen fat burners use various implements — powders, pills, and even topicals — as a delivery method. While they each have their place, some prefer adding a tasty drink to their supplement regimen, as opposed to a few capsules.

Unbound taps into their NutraBio roots — NutraBio is no stranger to making delicious supplements — in making UNLOCK powdered fat burners. They’ve done so with a bit of twist, too, as UNLOCK comes in a few unique flavors we’ve rarely seen. This makes us pretty excited to give them a try — if anyone can pull it off, it’s difficult to bet against the formulators over at NutraBio! 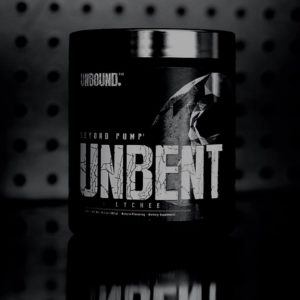 Here are the flavors UNLOCK is currently offered in:

Unbound recommends mixing one serving (2 scoops) with 12 to 16 fluid ounces. If you’re going to go with only 1 scoop — which may not be a bad move as you find out where your tolerance lies — adjust the amount of water accordingly!

Taking it pre workout? Then get the pump of your life with Unbound UNBENT, a stimulant-free pump powerhouse that hits tons of pathways to get you yoked up during and after your workout!

Unbound has branded themselves as a supplement company for those who are relentless in the pursuit of their goals. Their products are designed to aid in that pursuit and amplify both the experience and results. Crafted with a level of intellect, resources, and experience that’s difficult to find in this industry, Unbound’s initial six products certainly have the potential to help individuals #BeUnequaled.

This notion rings true in UNLOCK, the brand’s incredibly strong, clinically-dosed, and effective fat-burning powerhouse. Utilizing 11 ingredients — including six patented ingredients from some of the industry’s top formulators — UNLOCK packs an impressive amount of fat-burning potential into each serving. It won’t do the work for you, of course — balanced nutrition, an effective training regimen, and other lifestyle factors will always be central to any weight-loss goal — but the market Unbound is looking at already knows that.

The only way you can reap the benefits is by putting in the necessary work. UNLOCK is for those who are already dialing in all they need to in order to get lean and healthy — these people may just be able to UNLOCK another level in their weight-loss journey, maximizing their hard work in the process.