Unbound, a new brand launched in May 2021 by the team at NutraBio, has been making waves in the industry weeks before their arrival. Led by NutraBio’s founder and CEO Mark Glazier, Unbound originally built up excitement with a creative marketing campaign — complete with wrenches and literal drums full of supplements. With talented, experienced formulators at the helm, Unbound has successfully developed multiple innovative and effective products for those looking to #BeUnequaled. 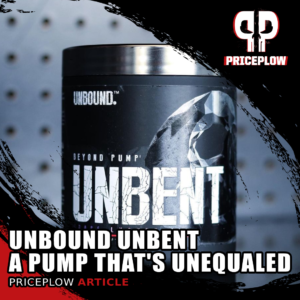 The original six products at launch each serve a distinct purpose and address different sectors of the industry. Those looking for a high-energy, euphoric training session can opt for UNLOAD, a stim-packed pre-workout formula. Those on a weight-loss journey can look to UNLOCK — a comprehensive, potent fat burner.

But what about those interested in getting an intense, skin-splitting pump in the gym? Unbound has something for them, too.

UNBENT is the brand’s strong, multifaceted pump formula that delivers the type of muscle pumps that any pump-chaser would surely appreciate. This non-stimulant pre-workout induces pumps through a few different means, creating an all-around swell that takes your training to another level and leaves you with that obscene, slightly immobilizing muscle pump we sometimes crave.

Read on for a breakdown of everything UNBENT has to offer and the clinical data supporting its ingredients. Before we get to that, make sure you’re subscribed to PricePlow news and deal alerts so we can help you get your hands on the standard-setting products Unbound has to offer. Also, check us out on social media — Instagram, YouTube, and Facebook — for our coverage of industry news, interviews, and product reviews.

UNBENT supplies a few vitamins and minerals — not the main pump-inducing ingredients, but notable and appreciable, nonetheless: 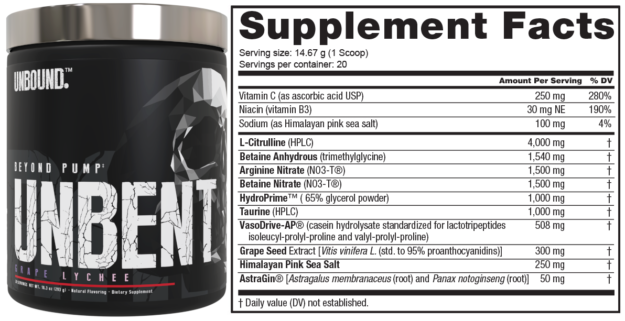 UNBENT brings relentlessly unequaled pumps to the platform. The question is, do you stack with UNLOAD or UNLOCK?

Unbound packs 10 active ingredients — four of which are trademarked — into its vein-splitting pump supplement. Here is what each 14.67 gram serving of UNBENT delivers:

Unbound is primarily interested in pushing the limitations on what an effective sports supplement can be, evidenced by the ingredients in their product line. It’s fitting that such unique, effective formulas are accompanied by equally-eccentric flavors! 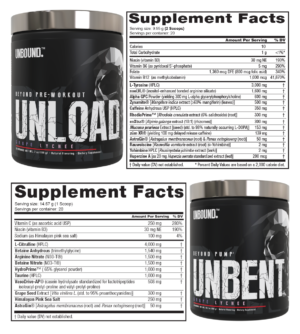 The Unbound Pre Workout Stack, fronted with nooLVL in the UNLOAD high-energy and stim pre workout supplement and the first to use NNB’s RhodioPrime 6X, followed by massive pumps in UNBENT, all manufactured at NutraBio Headquarters

At launch, UNBENT came in three extremely unique flavors — grape lychee, mojito, and tangelo. Here are the flavor options currently on the market:

Many would be satisfied by simply getting an insane pump in the gym. But kicking off that effort with a formula that is just as unique and tastes as good as it is effective? That sounds good to us!

Oftentimes when a newcomer hits the scene, it’s their stimulant-powered products that drive their initial popularity. And though Unbound isn’t technically a neophyte — it’s the brainchild of NutraBio CEO Mark Glazier and his team, and they know a thing or two about sports supplements — the notion still applies. UNLOAD and UNLOCK, Unbound’s stim-heavy pre-workout and fat burner, certainly generated a ton of buzz upon their unveiling, and rightfully so. However, the other four formulas are nothing to scoff at, either!

It’d be shortsighted to overlook UNBENT, which has quickly become one of the most powerful non-stimulant pump pre-workouts on the market. Loaded with ingredients that induce muscle pumps through virtually every way possible — nitric oxide-producing agents, natural nitrates, hydration support, and water-based pumps — UNBENT packs everything necessary to yield that pumped-up sensation in the gym.

All you have to do is put in the work. A supplement formulated to #BeUnequaled calls for an individual who is training to #BeUnequaled. Amplify the intensity of your training with the pump-inducing UNBENT.