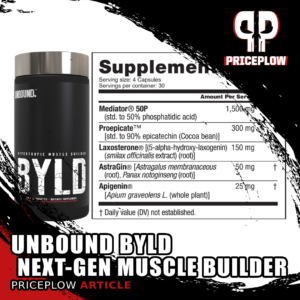 It’s made in his world-class NutraBio facility, but with Unbound and supplements like BYLD, you’ll get the next generation of ingredients. When it comes to muscle building supplements, that’s a big deal, because most of us already know about protein, creatine, betaine, and similar ergogenics.

BYLD is what’s next. Inside, Unbound takes muscle builders to another level, bringing a 3-in-1 system designed to:

This beast of a supplement utilizes a full clinical 750mg yield dose of phosphatidic acid, an ingredient we’ve long enjoyed — when we can find it. It’s back now, and back in a big way with Unbound’s BYLD.

The details are below, and obviously we’re excited, but first be sure to check out our Unbound news alerts, since there are several scientific write-ups to follow:

Take 4 capsules of BYLD once daily. On workout days, take it pre workout to enjoy additional nitric oxide boost. On rest days, try to take it at roughly the same time to maintain ingredient plasma levels.

From our point of view, BYLD does not need to be cycled. Generally, however, supplements are to be taken 8 weeks on, 4 weeks off in order to assess effects. We’d see no problem with an extended run if working on a 12- or 16-week prep though. 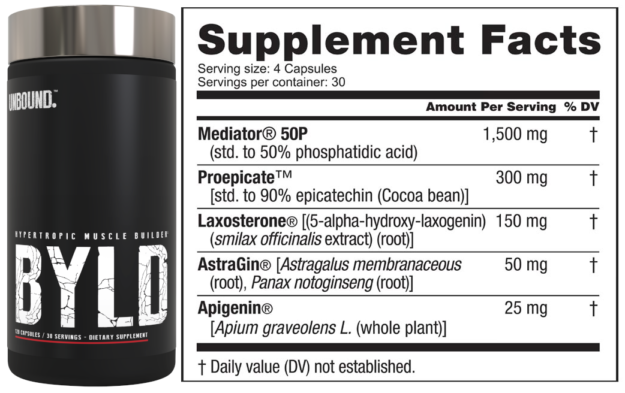 In a time when natural muscle-builders have been lacking, BYLD brings industry-leading dosages of phosphatidic acid and introduces apigenin to the category!

A non-hormonal muscle builder we can get behind

BYLD takes advantage of a huge gaping hole in the sports nutrition market – muscle building supplements. Which is odd, because it’s a major market that so few brands are approaching with vigor.

Unbound has launched with six cutting-edge supplements, manufactured in one of the world’s most trusted facilities at NutraBio HQ.

We all know the basics, but what are the next generation ingredients? What will actually work, what’s not going to trigger a nasty hormonal cascade, and what’s not a complete ripoff like so many of the underdosed capsule-based bottles we see in retail stores?

We’ve long said phosphatidic acid and epicatechin are two such ingredients, but understand that there’s no getting around the high price of PA without eating tubs of soy lecithin sludge, and a bar of non-alkalized dark chocolate per day is expensive and a waste of calories that could be spent on beef. We’ll stick to this instead.

Mark Glazier and his high-energy team at Unbound made it happen, and they did it in as reasonable a way as possible given the price of these trademarked ingredients.

Now after taking BYLD with UNBENT to get its clinical dose of betaine along with those insane pumps, all you need to add is plenty of beef, NutraBio Creatine and the rest is history.