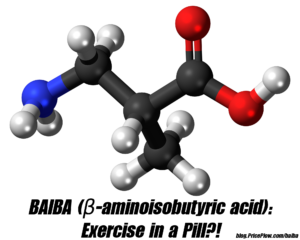 This amino acid has a similar structure to beta alanine and taurine, and is created naturally when you exercise. But can ingesting it make your body kick into “exercise mode” without lifting a finger?!

We’re always on the lookout for supplement ingredients that could be the “Next Big Thing”, and it’s very possible we just found one for dieters.

Its name is BAIBA (pronounced “BAY-buh”), and it may be able to mimic certain fat-burning processes that occur in your body when exercising – even when you’re not working out!

Of course, we never suggest avoiding exercise, but research published in 2014 definitely got our attention, which is why we originally wrote this article in 2015. Four years later, we finally found a trustworthy ingredient supplier in NNB Nutrition’s MitoBurn, allowing us to pursue more research.

No statements on this page are approved by the FDA and you should seek a doctor’s approval before beginning any new supplement or dietary program.

This article was originally written in 2015, but updated in 2019 after finally finding a reputable raw material source from NNB Nutrition.

This ingredient is incredibly interesting, especially to aggressive dieters, but is definitely not for the conservative or cautious user — at least until more human-based research is published.

This article is science-intense, so get ready:

BAIBA, or β-aminoisobutyric acid, is an amino acid generated during exercise (an “exercise-induced muscle factor”) that is not naturally found in the genetic code of any organism — it’s formed when either thymine or valine are broken down.[1]

This means that BAIBA, while an amino acid, is not a building block for proteins but rather is used as a signaling molecule within the body. Because of this, consuming it will not contribute to the development of muscle mass like traditional essential amino acids (often used for recovery during or after a workout), but it may hold promise for fat-loss – and weight loss.

Mike brought industry guru Shawn Wells on to discuss BAIBA – check out the video below if you’d rather listen than read!

Now let’s get to the fun part:

BAIBA’s role in the body

BAIBA mimics the role of exercise through a few interrelated pathways, however, it must be emphasized that BAIBA does not augment structural changes in muscle (hypertrophy) or cause an increase in strength in any way.

Instead, BAIBA’s effects are based around metabolic changes in the liver and in fatty tissue. Some of these are: 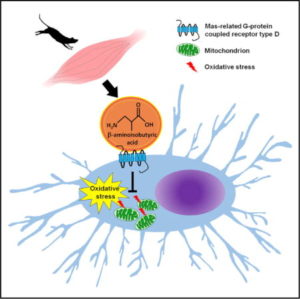 New research has shown that BAIBA may protect from disuse-based bone loss thanks to it preventing osteocyte cell death that would have been induced by reactive oxygen species (ROS).[24]

The below diagram highlights the process by which BAIBA is increased and how it exerts its effects: 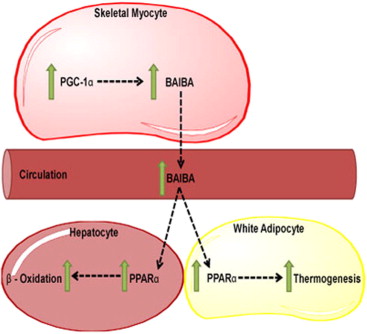 At this point, we need to dig deeper and discuss the functions mentioned above, which will help explain how BAIBA works and how it is expressed.

As stated above, BAIBA performs most of its roles through PPAR alpha activation, however, it is only released when another protein is expressed in muscle tissue – PGC1 alpha.[1,3,7]

PGC 1 alpha is a protein that is increased during and after aerobic exercise. It contributes to the way our bodies respond to an exercise stimulus — by performing the following tasks:

PGC1 alpha is restricted to muscle tissue so in order to exert its effects elsewhere in the body, it uses ‘messenger’ molecules , called myokines, such as irisin and BAIBA to do its bidding in other areas of the body.[7]

BAIBA acts on PPARa to perform the roles of white adipose browning, increase of beta oxidation and decrease in fat creation.[1,3,8] 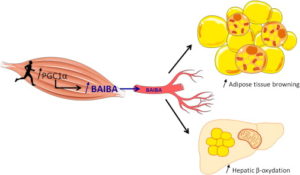 “BAIBA is released from the muscle after an exercise bout, promoting differentiation of brown adipocyte-like cells within subcutaneous fat depots and fat oxidation in the liver.”[6]

PPAR alpha is a major regulator of lipid metabolism in the liver, involved in the breakdown of fatty acids and increases in energy utilisation. It performs its work through increasing fatty acid transport, binding, and activation and through beta oxidation.[5,9]

Beta oxidation is the process in which fat is broken down for use as energy in the body.[5]

Next, let’s take a look at the different forms of adipose in the body to see how BAIBA influences these, and why it matters.

In the body, we have two major types of adipose tissue: brown and white.[3,10]. 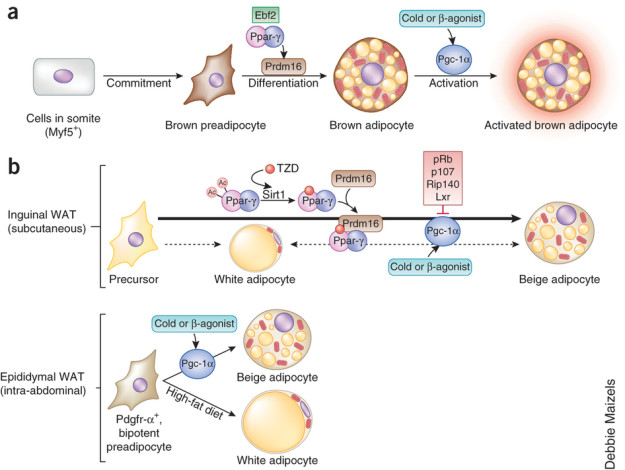 The regulation of brown and beige adipocyte development.[10]

How BAIBA works: the ‘exercise in a pill’ part

So when a person exercises, concentrations of BAIBA dramatically increase within both skeletal muscle and within other tissues.[1,3] BAIBA then signals for an increase in the expression of brown adipocyte-specific genes via PPAR alpha, which triggers the “browning of white fat”.[1]

Now before anyone dismisses this idea purely because it was established in mice, be mindful that most preliminary trials are first conducted in rodents to assess potential mechanisms that warrant further investigation in humans, as well as for the obvious ethical reasons.

We’re not saying that if you jump right on board, you’ll reduce your fat mass by any appreciable amount. We’re saying that this research looks incredibly promising, and then some — and we can’t wait to see more of it.

MitoBurn from NNB Nutrition has been tested out to be a pure form of BAIBA on the market!

Now that you have some background, it’s time to talk about supplements. However, remember that there is little-to-no published human research at this point, and this is not for anyone who is even remotely cautious or conservative.

It goes without saying that absolutely no statements on this page have been evaluated by the Food and Drug Administration, and that this compound is not intended to diagnose, treat, cure, or prevent any disease.

Discuss any new diet and/or supplementation protocol with a licensed physician, and that is doubly true for a prospective new ingredient such as this one.

MitoBurn by NNB Nutrition: The Trusted and Tested form of BAIBA 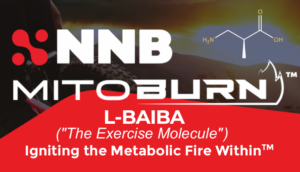 With that disclaimer in mind, there is currently one company who has a BAIBA raw material ingredient: NNB Nutrition, who has an L-BAIBA ingredient named MitoBurn™️.[27]

We asked NNB for an HPLC test, and they immediately provided one (Full PDF available here): 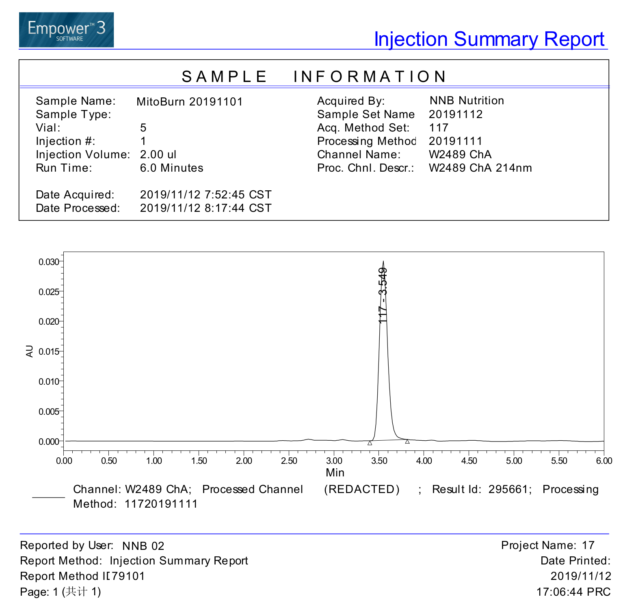 NNB Nutrition provided this HPLC lab test for MitoBurn, with one central peak and no additional “noise” or impurities. Full PDF Available Here

Formulators and brands looking to get a sample of BAIBA should check out NNBNutrition.com, email NNB Nutrition directly at info@nnbnutrition.com, or contact us and we will arrange for a test!

Truthfully, any new supplement such as this one should first be run 100% standalone in order to assess its efficacy without any confounding variables.

After some use, if there is success and you wish to maintain, the following compounds may provide additional synergy:

But once again, any new ingredient should be run standalone first.

Putting it all together 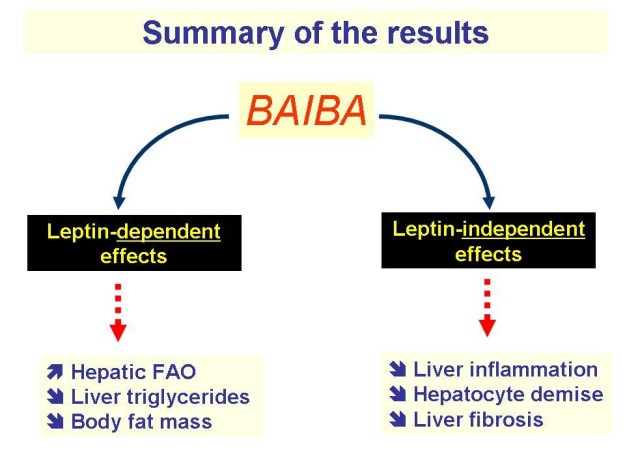 Conclusion: “BAIBA, when I think about you…” 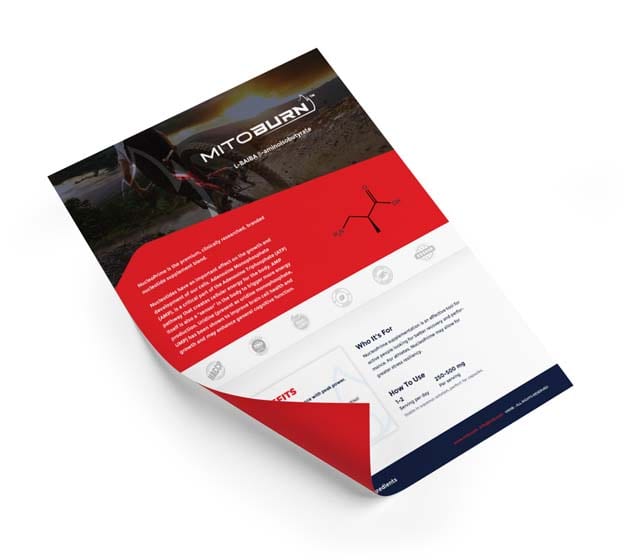 This article was originally written in 2015, when we were very excited about it, but there have been sourcing issues that made it next to impossible to find. Four years later, we came back to update the article and found a trusted and tested supplier in NNB Nutrition who has the ingredient, and came to realize that there was even more research behind the ingredient.

Meanwhile, the diet world seems to have caught up with the effects of BAIBA, given that ultra low carb ketogenic diets have exploded during this timeframe, and this is an extremely pro-ketogenic supplement.

At the end of the day, we’re definitely more confident that BAIBA is a potential Next Big Thing™, but still want to see human research before we can 100% get on board. With that said, we’re always excited about new compounds and new products, and as time has passed since our original publication, we’ve grown far more interested in the ingredient.

Interested in trying NNB Nutrition’s MitoBurn for your brand’s formulas? Contact us and we’ll arrange a sample for you!