Posted on September 14, 2022 by Mike Roberto and Nick Andrews | No Comments

Beast Sports Nutrition is on a tear of new releases, with Beast-fronted supplement tubs that have feel-good formulas to match. Their recent Beast Mode X pre-workout supplement has a powerful feel-good “X-Factor” with RhodioPrime Rhodiola extract and a timed-release caffeine blend, so we love what Beast has been up to.

But for those who are looking for weight loss, Beast has a powerful pre-workout variation for you: Beast Mode Burn! 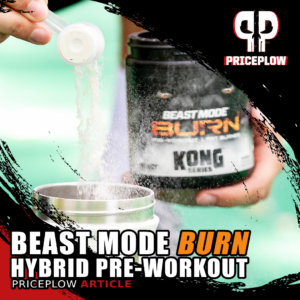 The Beast is Back, with Beast Mode Burn, a 2-in-1 hybrid fat burning pre-workout supplement!

Burn Fat Like a Beast with Beast Mode Burn

With Beast Mode Burn, you never have to choose against your stim fat burner and stim pre-workout — this is the do both option. But unlike other fat burners, this one’s not over-the-top. 200 milligrams of caffeine and 1 milligram of rauwolscine are paired with novel support ingredients like NNB Nutrition’s MitoBurn and CaloriBurn duo.

The sweat effect is enhanced by GBB, and a unique fat burning mechanism is added with fucoxanthin, something that’s not in most powders.

Let’s dig in below, but first check prices and our Beast Mode Burn video — the Peach Sangria flavor is absolutely killer:

In a single scoop (9 gram) serving of Beast Sports Nutrition’s Beast Mode Burn, you get the following: 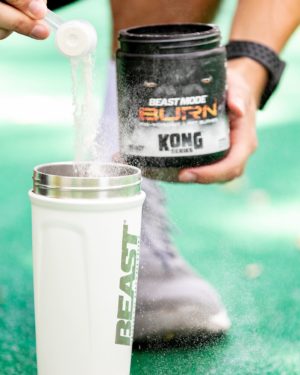 We love 2-in-1 formulas that have purpose. But we’ve found that these hybrid fat-burning pre-workout supplements are either incredibly expensive or ridiculously overstimulated for the average consumer.

Beast Mode Burn attacks that issue on both fronts – 200 milligrams of caffeine and 1 milligram of rauwolscine is “low” by today’s standards, but it’s a great way to get a thermogenic pre-workout supplement that nearly everyone can enjoy. Meanwhile, lower-caffeine pre-workouts like this don’t always have more novel ingredients like MitoBurn, CaloriBurn, GBB, or fucoxanthin, but this one does.

This combination puts Beast Mode Burn in a unique slotting, and without tons of citrulline (which became incredibly expensive in 2022), keeps the price tag far lower than its competitors using the CaloriBurn / MitoBurn combination. Well played, Beast.