To follow-up with more scientific information, we brought Raza Bashir (VP of Scientific Affairs and Product Innovation at Iovate and MuscleTech) and Shawn Wells (Chief Science Officer of NNB Nutrition and Co-Founder of Ingenious Ingredients) on to the PricePlow Podcast to explain Shawn’s latest innovation in enfinity brand paraxanthine. We then discuss how MuscleTech is using it to power cleaner, more consistent workouts and diet support through a new pre-workout supplement and two weight loss products. 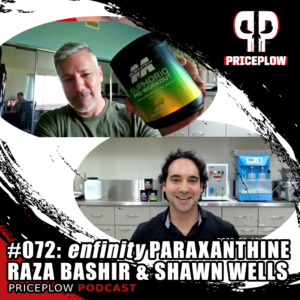 MuscleTech is going all-in on this ingredient, and through the episode, you’ll learn how Raza has been “hoarding” much of the stimulant for the better part of four years. Once you try it, you’ll understand why – for many users, it’s simply a better experience than caffeine.

MuscleTech is using the moniker iQ, stating that this is the smartest way to supplement your energy. After learning more about paraxanthine’s differences from caffeine, there’s a good chance you’ll agree — or at least understand why many users will like it more.

Finally, this is a follow-up from Episode #048 of the PricePlow Podcast, where Shawn teased the ingredient a bit over a year ago. It’s finally here and upon us, so listen or watch and enjoy:

You can head back to our main MuscleTech iQ Series article, and sign up for our paraxanthine news alerts below!