Posted on September 21, 2022 by Mike Roberto and Nick Andrews | No Comments

The day is upon us! After years of waiting for a new legally-compliant workout stimulant, the masterminds at MuscleTech have finally brought it to us. It comes in the form of enfinity brand paraxanthine — a caffeine replacement — and the first product to use it is the EuphoriQ pre-workout supplement.

EuphoriQ is the first pre-workout supplement to contain enfinity, a novel caffeine replacement that consists solely of paraxanthine, caffeine’s most potent metabolite. By cutting straight to paraxanthine — as we’ll explain in detail in this article — many of the negative effects of caffeine are eliminated, leaving an incredibly smooth and clean-feeling workout experience.

We have a lot of background information linked below (such as our MuscleTech iQ Series introduction and beta tests as well as a podcast episode about paraxanthine), but this article will focus on the EuphoriQ pre-workout supplement itself. We can say that this is one of the most exciting new product and ingredient launches we’ve seen since launching PricePlow in 2008.

The implications of this ingredient are that big – and many of our readers will realize that caffeine is not the ideal stimulant for them — but the paraxanthine portion of it can bring many of the positives without the negatives. And it all starts with the aptly-named EuphoriQ pre-workout.

Let’s check PricePlow’s prices and news alerts, show our videos, provide a bit of background info, and then dive into the details of EuphoriQ itself:

The enfinity-powered iQ Series: Some background and introductory information

EuphoriQ is part of a three product release of enfinity-based supplements: 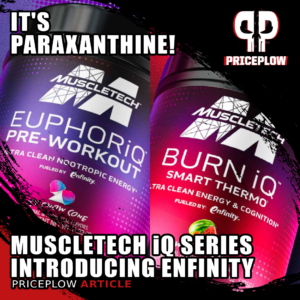 MuscleTech has revealed their new iQ Series of supplements, and it will include a new stimulant — paraxanthine — named enfinity. Learn how this lineup will forever revolutionize the entire energy industry

These were announced by PricePlow in our article titled MuscleTech Reveals New Workout Stimulant: enfinity brand Paraxanthine which gives an overview of the lineup launched in September of 2022.

With that backdrop available for you to investigate further, let’s get into EuphoriQ specifically.

Below we discuss the label. Many readers are familiar with everything except the new ingredient, enfinity (paraxanthine). If you wish, you can skip directly to the paraxanthine section.

In a single 1 scoop (17 gram) serving of EuphoriQ, you get the following:

So far, we’ve tried the Yuzu Lemonade flavor, and it’s phenomenal. But MuscleTech has the following flavors available: 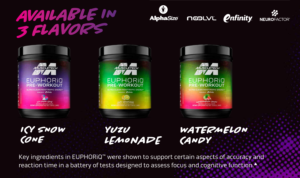 Conclusion: enfinity Paraxanthine in a Nootropic Pre-Workout: A Perfect Match!

The long-awaited next generation stimulant is here – enfinity Paraxanthine! MuscleTech is breaking ground on what we believe is the biggest legally-compliant stimulant the industry has seen in a very long time.

What’s just as impressive is how Raza and the team at Iovate formulated it into EuphoriQ. They didn’t just take one of their previous pre-workouts (Shatter Elite is a phenomenal formula, for what it’s worth) and swap caffeine for paraxanthine. They actually built a nootropic pre-workout supplement, nooLVL and all.

It all works incredibly well together, and once you run a tub of EuphoriQ, you’re going to feel a bit wild-haired going back to caffeine anhydrous – especially if you’re a slower caffeine responder. This really does change the game, and MuscleTech brought it to market first.