For nearly half a decade, the sports supplement industry has been in search of a new workout stimulant to intelligently — and safely — power athletes through their training.

The pioneers at MuscleTech have found it, and it’s going to turn the dietary supplement industry — especially the energy category — completely on its head.

Its name is enfinity, and it’s a pure form of paraxanthine, caffeine’s most potent metabolite. MuscleTech is pioneering its release, and unlike many other stimulants that are added to caffeinated formulas, this enfinity is here to replace your caffeine! 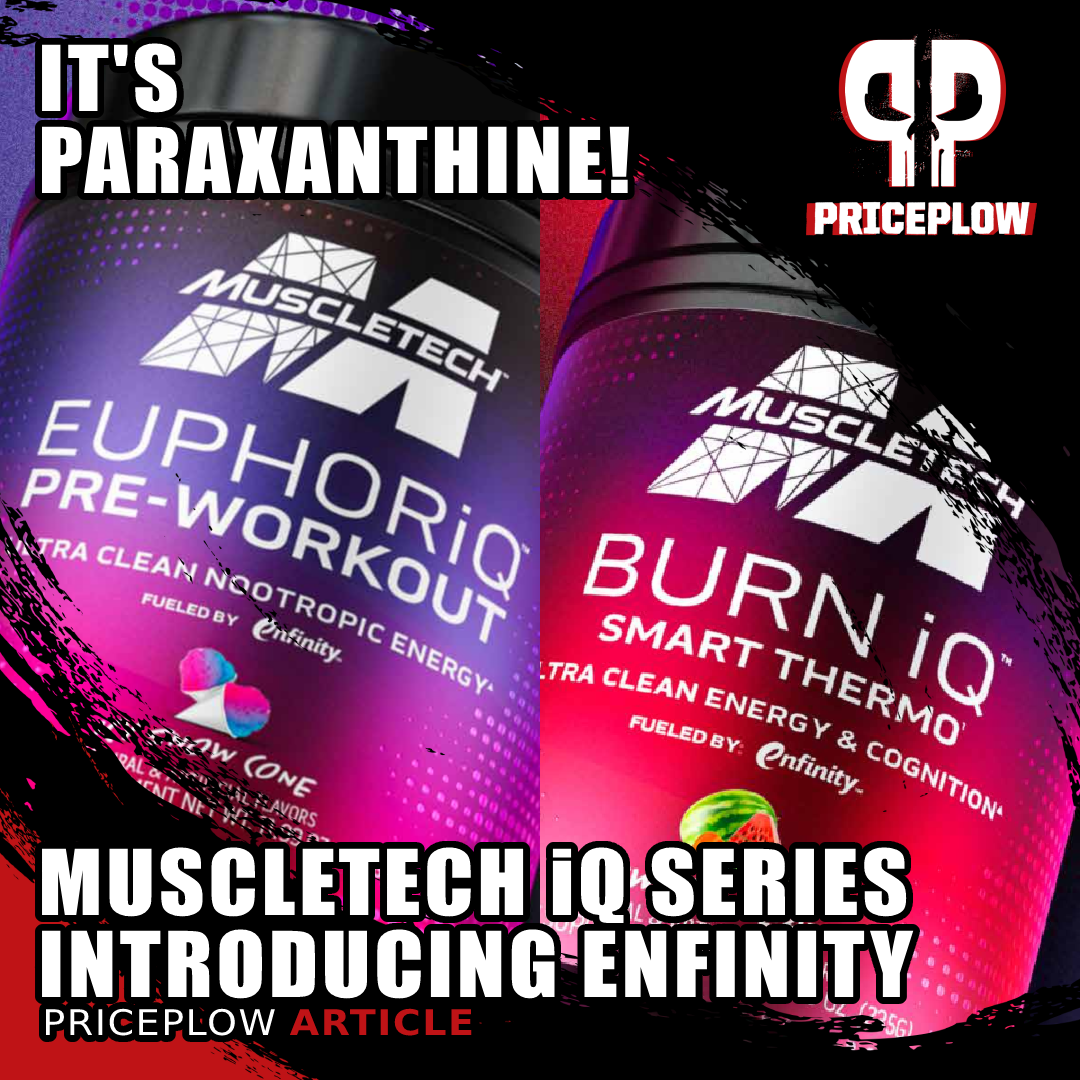 MuscleTech has revealed their new iQ Series of supplements, and it will include a new stimulant — paraxanthine — named enfinity. Learn how this lineup will forever revolutionize the entire energy industry

MuscleTech is releasing it in three different supplements:

With paraxanthine instead of caffeine, users are noticing a far smoother energy experience, with less of the negative effects generally associated with higher doses of caffeine.

In this article, we show the labels and give a brief rundown of this next-generation stimulant and explain why the experience is so universally positive. But first, we showcase some of the shockingly accurate commentary from the blinded beta-testers recruited on PricePlow’s Discord, and allow you to sign up for our MuscleTech alerts, because we have a ton more information on its way:

What is enfinity? Introducing Paraxanthine…

Everyone knows caffeine, the world’s most popular drug / dietary supplement ingredient that provides energy and wakefulness through its inhibition of phosphodiesterase and adenosine.[1]

The three metabolites of caffeine 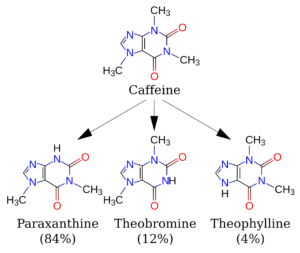 Caffeine has three major metabolites, and one of them (paraxanthine) does the heavy lifting. The other two have very long half-lives, which could be interfering with your quality of energy! Image courtesy Wikimedia

What most people don’t know is that the caffeine molecule itself isn’t doing most of that work. Once metabolized in the liver, caffeine leads to three metabolites, in order of prominence:

It turns out that much of the heavy lifting of caffeine’s effects are done by the first of the group — paraxanthine — which has been shown to be a potent force both in terms of lipolysis (fat burning)[2] and adenosine antagonism.[3] It also provides much of the actual dopamine upregulation we feel when taking caffeine.[4]

Paraxanthine has stronger binding potencies for adenosine and leads to greater motor-activating effects than caffeine itself, and can increase processing speed, improve response time, and promote sustained attention while reducing errors.[5,6] We’re even seeing better muscle mass, strength, and endurance in mice with it![7] This (and more) will be covered in content as we dive deep into the new research.

Theophylline and theobromine – drivers of caffeine’s side effects?

It also turns out that when you take caffeine, the other two metabolites may actually be driving some of the side effects, if for no other reason that their half-lives are incredibly long — theobromine’s average half life is 6.2 hours and theophylline’s is 7.2 hours in humans.[8]

So when you take that 4pm dose of caffeine in your pre-workout supplement to hit the gym after work, your body has basically only cleared half of the theophylline and theobromine by 11pm. This can lead to awful sleep, as many of us have experienced after taking a stiff pre-workout too late.

Paraxanthine, on the other hand, has a shorter average half-life at 3.1 hours, leading to caffeine’s general half-life of 4.1 hours.[8] The above factors combined have led paraxanthine to demonstrate less toxicity in preclinical studies compared to caffeine itself — yet with greater wakefulness than drugs like modafinil![9] 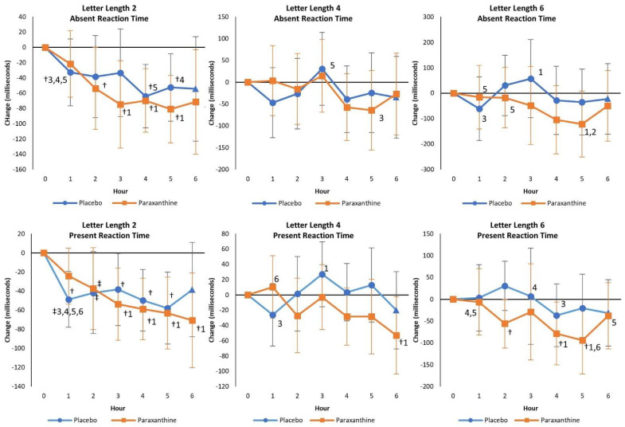 Does caffeine wreck you? You may be a slow metabolizer

Many of our followers need to keep caffeine doses low and only take them early in the day — if they take it at all. Research has shown that caffeine’s metabolism varies quite a bit across genetic and ethnic distributions.[10,11] Put very generally, there are slow, medium, and fast caffeine metabolizers, and those on the slower end of the spectrum don’t do very well with the compound. 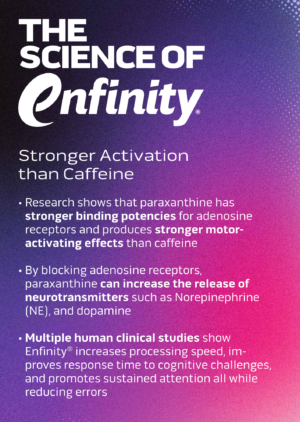 A brief intro to the science of paraxanthine / enfinity. We’ll cover far more data in the future!

What users are anecdotally finding thus far is that taking only paraxanthine itself leads to a far smoother and more consistent experience. Its shorter half-life works much better for slower metabolizers, especially without having to deal with the consequences of theobromine and theophylline hanging around for too long.

Even more interesting is that longer-term paraxanthine (those who are using it for a month or more), have consistently begun to say that caffeine feels “dirty” if they return to it.

Meanwhile, researchers have made statements such as, “As for paraxanthine it is also supposedly to be fairly harmless for humans”,[12] referencing research from the late 1980s![13] Newer safety and toxicity research also confirms this and more, showing a higher LD50 and no evidence of genotoxicity.[14]

enfinity: paraxanthine from a tested and trusted source

It’s time that paraxanthine was finally released to the world for those who are tired of caffeine and some of its consequences. Four individuals who are no strangers to the dietary supplement industry (nor to PricePlow Nation), Shawn Wells, Kylin Liao, Dr. Ralf Jaeger, and Dr. Martin Purpura have joined forces to form Ingenious Ingredients, shortened to ING2.

Developed and Tested at NNB Nutrition

Many readers will recognize Shawn Wells and Kylin Liao as leaders of NNB Nutrition, an industry-leading novel ingredient manufacturer where Shawn is the Chief Science Officer and Kylin is CEO. NNB is manufacturing, testing, and purifying this ingredient on behalf of ING2, who are the IP holders and also currently the distributors of enfinity.

NNB Nutrition is a highly-trusted, innovative ingredient development company with an elite team of over 100 scientists from over 10 countries. Two of their executive officers, Shawn Wells and Kylin Liao, are part of the ING2 team. NNB will be manufacturing and purifying enfinity.

These veterans bring their elite manufacturing and biochemical expertise to the industry, providing an alternative energy source to caffeine. For many, this is the ingredient that you’ve been looking for. And MuscleTech will be the first to bring it to you in dietary supplements.

Shawn Wells has been on the PricePlow Podcast numerous times, and is scheduled to discuss paraxanthine alongside MuscleTech’s leadership.

We’ll be covering enfinity and paraxanthine in far greater detail in the future, but for now, let’s get into the three products MuscleTech will be releasing:

Over the years, MuscleTech has created countless energy supplements, and have brought some incredibly unique compounds and extracts to the industry. They’ve heard their customer base loud and clear: athletes want something new, something legally compliant, and something clean.

enfinity is just that ingredient – and MuscleTech is branding this the iQ Series, calling the smarter way to supplement. Let’s quickly look at the three supplements that will kick it off: 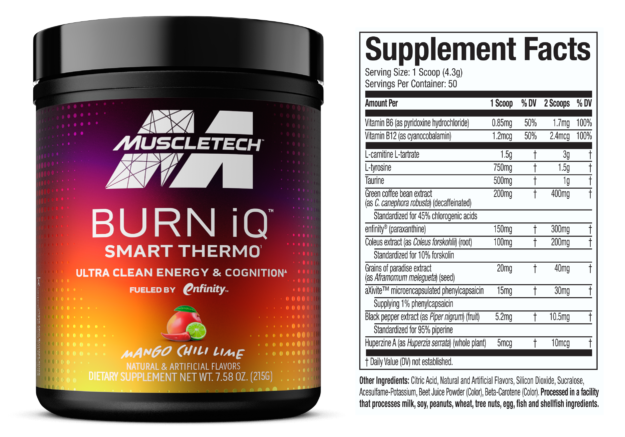 So no matter what your preference is – pills or powder, pre-workout or weight loss — MuscleTech has a smarter way for you to get clean energy from enfinity.

This article is only the beginning. We’ll be covering each supplement in-depth, taste the flavors, discuss the research, and have PricePlow Podcast episodes to get into the weeds of this launch.

For years we’ve been waiting for The Next Big Thing, and it’s here from MuscleTech. Get ready to get smart – the iQ Series is set to revolutionize the energy industry.