Grains of Paradise: Fat Fighting Spice of the Goddesses

Grains of Paradise is a spice routinely used in many styles of cooking to deliver a bit of “pop” to a dish. So why are we seeing it in fat burning supplements lately? Put simply: because it works – and there’s now legitimate weight loss studies performed on actual humans to verify those claims.

Also known as Aframomum Melegueta, Grains of Paradise has also been used in traditional medicines for a variety of reasons, which is what helped make its way into modern dietary supplements – especially those suited towards weight loss. However, there are several varying standardizations of the extract, so how do you know which one will actually provide any benefit?

We’ve done the homework for you and got a full blown analysis of this emerging ingredient below.

Grains of Paradise is a spice similar to ginger, and is an effective stimulant-free fat burning ingredient.

What is Grains of Paradise? 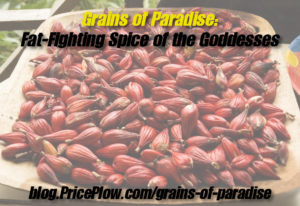 They’re not just for cooking anymore! In this article, we discuss how the proper extract from these seeds can be used for weight loss and body recomposition!

Grains of Paradise is a spice native to West Africa with a similar makeup as ginger. It belongs to the Zingiberaceae family of plants and goes by a variety of names including Melegueta pepper, alligator pepper, Guinea grains, fom wisa, and others. In Africa, it’s traditionally been used for digestive health, body recomposition, as an antioxidant, and even potentially for anti-diabetic purposes!

Grains of Paradise contain reddish-brown seeds that have a spicy, peppery taste. When eating it, one can definitely feel a ‘heating’ sensation – which often spells serious potential for those of us in the diet world.

Within the seeds of Grains of Paradise, researchers have isolated a few compounds that are known not only for their potent odor and flavor, but fat-fighting properties as well:

There may be others, but these constituents have been connected to promising research on weight loss – especially 6-paradol and 6-gingerol (which is also found in ginger). They are pungent and they are powerful – and this is where the real magic locked inside of Grains of Paradise.

Alton Brown used grains of paradise seed while cooking in the TV show, “Good Eats”,[10] after which the spice gained great popularity in the Western cooking world.

To understand their mechanisms, however, we must get into some technical details.

The human body has two types of adipose tissue:

The white fat: made for energy storage

White adipocytes are large diameter cells with a roundish shape, primarily consisting of one massive lipid (fat) droplet and a thin rim which contains the cytoplasm and the nucleus. White adipocytes are your storage cells for energy, they store excess calories for when food intake is low.[1]

The brown fat: made for thermogenesis

Brown adipocytes, on the other hand, are typically smaller diameter cells than white adipocytes and are made up of several small lipid droplets. Brown adipocytes are responsible for “non-shivering thermogenesis,” meaning BAT maintains body temperature homeostasis during cold exposure.[1]

Turning our WAT fat into BAT 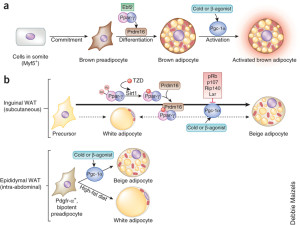 The regulation of brown and beige adipocyte development.

A Grains of Paradise extract including 12.5% 6-paradol was found to promote WAT transformation into BAT. If it seems too good to be true, Paradise extract has human clinical trials showing its effectiveness (more on that below!)

Why turn WAT into BAT?

So, we know that Grains of Paradise has the ability to “brown” WAT, but why would we want to do this?

Yet, we’re not just dealing with hypotheticals here. This is one of those ingredients to actually back its theory up with actual weight loss effects:

What are the Grains of Paradise Benefits?

Non-stimulant fat loss ingredients that actually work are a true rarity in the supplement industry. But it seems that this is exactly what we have with a quality grains of paradise extract:

Additional studies are underway and are expected in late 2016 / early 2017. We’ll keep this section up to date when they are published.

Who is Aframomum Melegueta / GP for?

Grains of Paradise is great for anyone looking for fat loss or “body recomposition” effects!

Practically any healthy man or woman looking to enhance their fat loss journey without the use of additional stimulants could see benefit from adding a high quality Grains of Paradise — we trust Paradoxine, discussed below — to their daily supplement intake.

Ideally, this ingredient is best suited for:

This definitely isn’t the easiest ingredient to extract. You can’t just throw some grains of paradise seeds into a capsule and call it a day — you need specialized equipment to standardize for the right components that led to the weight loss and brown fat activating effects mentioned above.

So for those of you interested in getting a product including Grains of Paradise, or even potential brands looking to manufacture a new fat burning supplement, we highly recommend looking into Paradoxine® by Bestcom BioTech.

Paradoxine is the premier choice when looking for the gold standard in Grains of Paradise extracts.

Bestcom’s Paradoxine® is standardized to 15% Aframols® & 12.5% 6-paradol – exactly what we’re looking for based upon the successful human-based studies out in the wild. Aframols® are a proprietary matrix of pungent aromatic ketones we described above created by Bestcom.

Further, the reason we’re recommending Paradoxine is because Bestcom Biotech is the one company that’s putting actual human-based research out there with placebo controls – this is not cheap and it’s important to support the brands that are making legitimate progress for dieters. You can see the charts from these studies pictured in the above sections where the results are discussed.

And finally, Bestcom Biotech is the only company we contacted that not only thoroughly HPLC tests their supplements, but they’re willing to share those lab tests, as shown below. On top of that, they have 3rd-party ChromaDex certifications and are produced in an NSF-certified, GMP-approved factory.

You can read more about Paradoxine® at www.paradoxine.com. 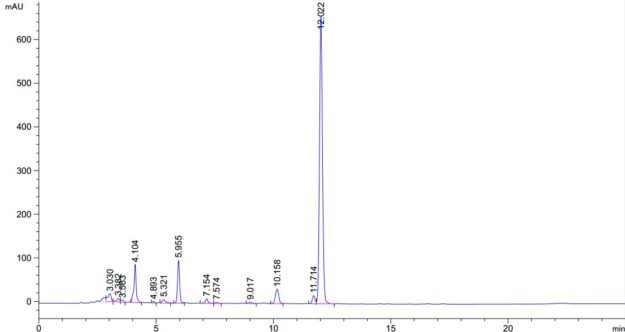 Bestcom’s Paradoxine® is standardized to 15% Aframols® & 12.5% 6-paradol and is thoroughly scrutinized with HPLC tests for purity.

With the research they’ve provided, as well as the standardizations they’re using that model the successful studies, we see no reason why anyone should use anything else. Like we’ve said, you can’t just take some seeds and put it into a capsule – you need to get the 15% Aframols® & 12.5% 6-paradol and that’s what Bestcom has done with Paradoxine.

On Paradoxine.com, you might also notice Bestcom Biotech also talking about LeanAM™, another Aframomum Melegueta extract they make. They are both standardized to 15% Aframols® & 12.5% 6-paradol, yet LeanAM has fewer HPLC peaks when tested, meaning that there may be fewer active components (four in LeanAM vs. six in Paradoxine), but the actives they do have are stronger per gram. 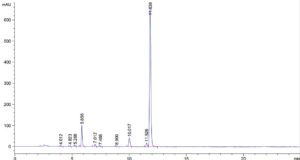 LeanAM is another grains of paradise extract from Bestcom. It is a new SFE-CO2-based extract without solvent residue and a more natural original seed aromatic smell. Who will be first to test out LeanAM in a supplement?

Whereas Paradoxine is extracted with an ethanol process, Lean AM is a new SFE-CO2-based extract. It is the most pure and high-quality form and is without solvent residue, yielding a more natural aromatic smell, closer to the original seed.

At the time of writing, there are no supplements on the market using LeanAM. We’ll update the supplements section of this page when the upcoming fat burners with LeanAM are out in stores and we can try them. This may also present an opportunity for supplement brands to be the first to test it.

We’d like to thank Bestcom Biotech for providing the lab tests and research texts shown above when requested.

Before we get into the best fat burners with Paradoxine, it’s best to know what kind of dosage to look for.

With fewer peaks and different extraction process, LeanAM may be even more concentrated! This is a newer SFE-CO2-based extract without solvent residue, yielding a more natural original seed aromatic smell.

As for cycling, Paradoxine® should be perfectly safe to continue supplementation for longer periods of time. You may want to monitor progress on longer cycles in case your body begins to build up a tolerance to the ingredient, however we aren’t sure whether that is likely to occur or not.