SteelFit Shredded Steel: The Intense Fat Burner That Wires You IN

Update! Shredded Steel has been awarded PricePlow’s Best Fat Burner of the Year! See why below!

Although a “new” brand, SteelFit‘s team has been in the fitness industry for nearly 30 years. They come from Pro TanⓇ, the leading skincare and tanning products in the bodybuilding industry. But in recent years, the team has taken all of their knowledge and contacts and got into the supplement space. They entered with a fresh perspective, wanting to introduce a few new ingredients into the market. 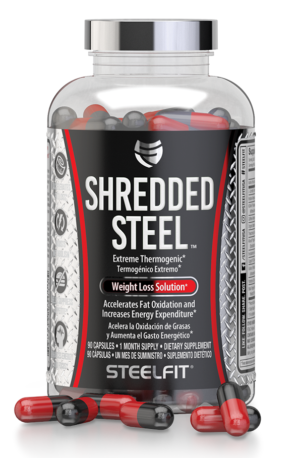 Do you love yohimbine? If so then this is a must-try with a hot new ingredient!

SteelFit isn’t afraid to be a little different – they produce high quality, effective labels, while always looking for ways to differentiate themselves. And boy is this supplement here different!

Fitting with the approach of the company, SteelFit has hit us with an intriguing new fat burner – Shredded Steel. We’ve raved about their spicy thermogenic drink mix, Steel Sweat, but this one comes in capsule form. Not only is this label packed with effective ingredients we’re accustomed to seeing (L-carnitine, caffeine, etc.), it also includes some other really interesting — and promising — new compounds.

When it comes to thermogenics, any unique and safe ingredients are always welcome. To find out exactly what’s in Shredded Steel’s compelling label, read on! But first, don’t forget to check out PricePlow for price comparisons, and be sure to sign up for SteelFit deals and alerts as these guys are just getting started!

Listen to Mike rave about this low-caffeine, high-yohimbine, iodine-based blend:

If you don’t want to read everything, then check out Mike’s ingredient explanation, split off from his review up above:

One dose of Shredded Steel is 3 capsules, taken before your first meal of the day, as the caffeine + yohimbine components may help suppress appetite some. SteelFit also suggests you drink at least 6 glasses of water, in order to warn off any potential dehydration. 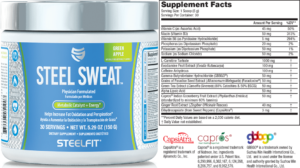 If you’re crazy about heat, this label is loaded with thermogenic ingredients… but we’re definitely not recommending this to rookies right off the bat!

As far as stacking goes, there are a ton of options you can choose from. Due to the relatively low caffeine content in this product, you could still get away with adding additional caffeine if that’s your kind of thing (like a small cup of coffee or Steel Sweat — but things will get hot). However, it’s not recommended at first because the yohimbe comes on strong, and you really need to assess before adding more. This is a 150mg caffeine dose that lasts.

We suggest adding in some form of alpha-lipoic acid (ALA), which complements L-carnitine in that it activates the same mechanisms in the body.[38] Incorporating some choline in a good idea too, as it’s been shown to help preserve L-carnitine levels within the body, and may even have its own ability to help burn fat.[39]

Meanwhile, if concerned about thyroid function, L-Tyrosine may work well with the iodine as it combines to create T3.

You can also look into any stimulant-free fat burners on the market to really go after any stubborn body fat, such as SteelFit’s SteelCoreⓇ.

Conclusion – Get Wired In and Get Ready to Get Shredded

Look, losing body fat is hard. Our bodies tend to love hanging on to it, as it’s a dense energy source and our bodies see no reason to give it up while we have plenty of glycogen to work from within the muscles and liver. Sometimes, we just need a little extra boost to kickstart the fat-burning process. 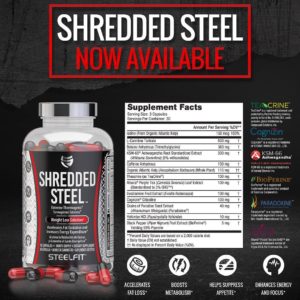 There’s no way around this: with 10mg yohimbine, this stuff is intense. You could say “wired”.

If you have your diet and training on point, stress levels (relatively) low, can handle the yohimbine, and are looking for that something extra, SteelFit’s Shredded Steel is fantastic place to look. It uses science-backed ingredients to help you burn stubborn body fat, but it also gives you some angles that other fat-burners don’t. By prioritizing iodine, Shredded Steel is looking to optimize thyroid levels, a key factor in enabling your metabolism to function properly. In GHG, you’ll be getting a relatively new ingredient with very promising new research behind it.

SteelFit is coming at you with a great, fully-disclosed fat-burning powerhouse. We’ve got no doubt that this supplement would be a worthy addition to your fat-burning regimen. Too often, we see fat-burners that have a long list of proprietary blends, hiding what’s truly in them. It takes great confidence to completely open up the label, and it usually means the company believes in what its product can do for consumers.

If you’re down to get wired in, SteelFit Shredded Steel has a formula we’re happy to recommend to Y-lovers!