Alpha Lion always over delivers on every product they create.

When you think of Alpha Lion the first thing that probably comes to mind is SuperHuman.

Although they have several remarkable supplements, that name really stands out when glancing at their line. Originally, SuperHuman simply represented one of the best-selling pre workouts we’ve seen enter the market. When Alpha Lion released it, we were blown away with the ingredients, dosages, and effectiveness of the formula. And just when we thought it couldn’t get any better, SuperHuman Supreme launched and that definitely took things up a notch.

Those two products fully delivered on every aspect we look for in a pre workout: extreme energy and focus, optimized nutrient absorption, skin-splitting pumps, enhanced power and strength, and fun, refreshing flavors. Not only did they hit two home runs, Alpha Lion changed the game!

But the question still remains… What else can they do under the unrivaled name of SuperHuman? They can cross over into other categories and completely blow the competition out of the water.

Let us introduce you to a new breed of SuperHuman. Because SuperHuman is no longer just a product, it is a platform. 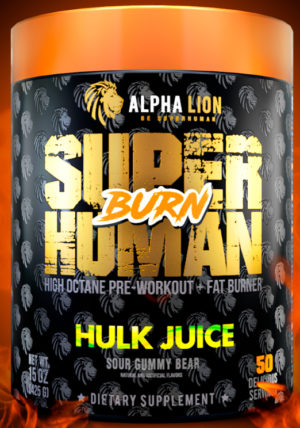 SuperHuman is all about taking training to the next level by using the best available ingredients, backed by numerous studies, at maximal dosages. So when PricePlow found out that a new product was on the way for the SuperHuman lineup, we knew it was going to be fully loaded. SuperHuman Burn is not just another pre workout, its main purpose is to also serve as a potent fat burner that can also help increase your performance and energy expenditure in the gym.

Like any other supplement under the SuperHuman name, it has everything you need to get insane results and that incredible, euphoric feeling. But this supplement also has some extras not found in nearly any other weight loss supplement! SuperHuman Burn was formulated to be a complete pre workout and fat burner, featuring some of the strongest ingredients currently available, such as MitoBurn™ L-BAIBA from NNB Nutrition.

This is by far the most comprehensive “fat burning pre workout” we’ve seen yet — and that’s just what we expect from Alpha Lion. Get ready to feel the burn with SuperHuman Burn!

In this post, we’re going to explain the method behind the madness of SuperHuman Burn’s formula to show you just how it will change the game yet again. But before we do, make sure you sign up to Alpha Lion news and deal alerts for exclusive access to the lowest prices around, product reviews, and interviews!

Buckle your seat belts, because this formula will take you for a ride. As mentioned, SuperHuman Burn is locked and loaded to help you burn fat, increase performance, ramp up energy expenditure, and maximize every training session. As with other Alpha Lion supplements, SuperHuman Burn has a fully transparent label so you know exactly the amounts of each ingredient make up the formula.

It’s definitely strong enough that you may not even need a full serving, so Alpha Lion lists the complete dosages for both a one scoop (8.5g) and two scoop (17.5g) serving. They also break up the label into five key pillars, SuperHuman Pump & Performance, SuperHuman Energy, SuperHuman Fat Burn, SuperHuman Focus, and finally, SuperHuman Absorption. That’s exactly how we will structure this ingredient analysis to allow you to get the most thorough understanding of the formula.

Alight now let’s see what a full scoop (17g) of SuperHuman Burn will deliver to elevate your performance and physique! 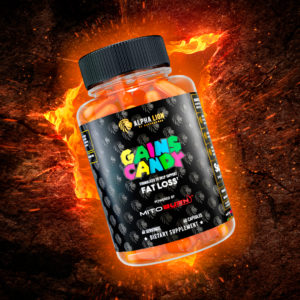 Want to try BAIBA / MitoBurn on its own? Then check out Alpha Lion’s Gains Candy Series MitoBurn!

If you’ve tried Alpha Lion’s flavors, you know they always put a unique twist on the taste and name. Alpha Lion really stands out from the flavors to the formulas, which was always their goal from the start. Pick any flavor that looks good to you, because they will never let you down! Also, Alpha Lion is known for releasing several limited edition flavors throughout the year so be on the lookout!

Just a touch of spice inside…

We’re not sure if this is due to the success of NNB Nutrition’s CaloriBurn or Alpha Lion’s consistently-superior flavoring systems, but it’s incredible how they made it happen. Just a dash of spice here – and we’ve left it in the shaker cup for hours without it getting much worse!

Get ready, SuperHuman Burn will be here in no time! 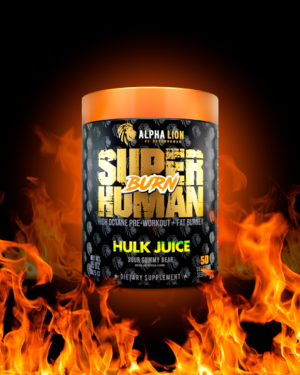 Are you ready for this insane formula?!

As mentioned at the very beginning of this article, when PricePlow found out there was another product being added to the SuperHuman line up, we knew it was going to overdeliver. But there’s no way we could have predicted that this formula was even possible to pull off. SuperHuman Burn is not just your average fat burner or pre workout, it takes both categories to another level.

Alpha Lion is dedicated to giving you the best products possible so you can reach your health, physique, and fitness goals faster. Not only do they create epic formulas for their consumers, but also for themselves. Why put out another average supplement, when you can take all the resources and knowledge gained over several years to create something that’s truly unrivaled.

SuperHuman Burn is about to take the industry by storm, and we’re not sure if people are ready for it! It fits in perfectly between SuperHuman and SuperHuman Supreme, with some added ingredients that really have you feel the burn. We can’t imagine what’s next for the Alpha Lion crew, but PricePlow will have everything you need to know covered, so make sure to subscribe down below!