The review is incredibly enthusiastic because it’s got a perfect blend of stimulants for nearly any type of consumer — what we consider an “entry-level high-stim pre-workout” since it’s not too strong, but definitely not weak. Alpha Lion SuperHuman is great for those who want a little something “extra” on top of a standard caffeine-based pre-workout.

That’s great, but what if you’re heading to your local retailer and want even more energy?!

If you’ve grown accustomed to those entry-level aggressive pre-workouts, you’ve likely found yourself sometimes searching for something more during a training session. Maybe the week has been rough, or the day’s been long – the fact of the matter is, we’ve all been in those situations, and getting in a solid workout becomes rather difficult.

In these types of scenarios, you feel like you need to be a bit more than SuperHuman. Luckily, Alpha Lion has got you covered, as they’re providing something to take you to the next level – SuperHuman Supreme. It contains all the good things that make SuperHuman so special, but tosses in even more stimulants and exotic ingredients!

Now, some of this may sound familiar to you. Alpha Lion originally launched SuperHuman Supreme back in May of 2019, however, it came with a caveat – it was meant to be a limited edition product, with the formula being available for only a short amount of time. Alpha Lion surely knew what they had in this pre workout, but they couldn’t have predicted all of the recognition it would receive. 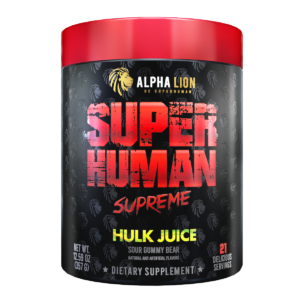 The newest rendition of SuperHuman Supreme is available as a retail exclusive!

Upon its release, the demand for SuperHuman Supreme absolutely took off. The intense formula was grabbing the attention of numerous consumers and Alpha Lion simply didn’t have the stock to satisfy everyone. Thankfully, they took a good look at what the product could do if it was a regular inclusion in their portfolio. SuperHuman Supreme is back full-time, and we’re extremely glad to see it once again! Whether you were lucky enough to get your hands on it initially or missed out, SuperHuman Supreme is now here to stay!

Make no mistake about it, this is a high-octane formula, meant for those looking for more than a “moderately aggressive” pre like SuperHuman. This powder hits fast and hard and is designed to deliver an insanely intense pre-workout experience. If you happen to be one of these people, this formula may just be one of the best options in that category!

In this post, we’re going to tell you all about what makes SuperHuman Supreme so special – both the ingredients it shares with its predecessor (SuperHuman) and the things that take things up a notch. Before we get to it, make sure you’re subscribed to PricePlow, where you can get some of the best supplement deals, news, reviews, and interviews out there!

Note: In the above price listings, some stores may still have the older formula. For the 2020 version discussed on this post, look for “Juniper” on the label.

The ingredients – what makes it supreme?!

This formula is downright loaded with stimulants, so much so that you should definitely consider half-scooping it before going with a full dose. We’ll continue mentioning it below, but we want to preface this analysis by reiterating that this SuperHuman Supreme is extreme – it’s not meant for most people, nor is it, as Ben said, meant to be used for every training session. 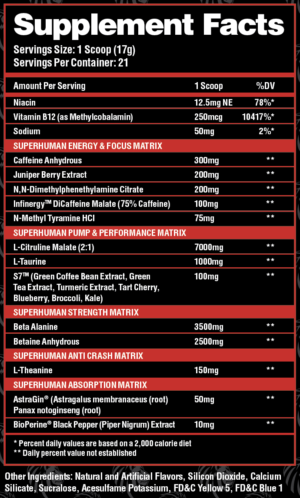 A high energy formula with a fully transparent label!

That being said, for those workouts that you truly need an extra push, SuperHuman Supreme will do more than that – it’ll absolutely shove you towards an intense session. The formula is sectioned off into matrices based on the purpose behind specific inclusions, so that’s how we’ll lay it out below. Here’s what each full-scoop, 17g serving gives you: 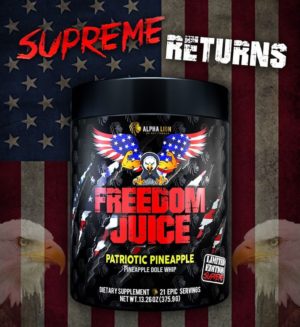 Alpha Lion is big on releasing limited edition flavors of SuperHuman Supreme, and we’re a big fan of them as well!

Alpha Lion loves releasing limited edition flavors throughout the year to celebrate various holidays. For example, last year for the 4th for July, Alpha Lion launched two America-themed flavors – Patriotic Pineapple and Lincoln’s Limeade – complete with some awesome branding, dubbing the product FREEDOM JUICE! We loved both of those flavors, and expect them to do similar things this year! If there’s two things Alpha Lion is known for, it’s epic formulas and amazing flavors!

If you are having a hard time deciding what flavor to get, don’t worry because you can’t go wrong with any of them! Here are all of the flavors of SuperHuman Supreme currently in stock:

Despite being somewhat new to the supplement game, Alpha Lion is making their presence known. They’ve been on fire with a seemingly endless string of awesome products. Their protein powder G.O.A.T.EIN launched itself into the conversation of best isolates, and they offer a joint formula, Cyborg, that may be one of the best formulas we’ve seen in that department.

While all of Alpha Lion’s offerings are great in their own regard, they have one product that is so incredibly unique, so powerful, that its release is what truly grabbed attention from the rest of the industry – SuperHuman Supreme. For 2020, Alpha Lion came out with a revamped formula of their infamous pre workout, that will still give you the boost in energy and performance you’re looking for! Although, there will likely be limited flavor releases in the future, this formula is here to stay!

The newest rendition of SuperHuman Supreme!

Knowing how special the formula was, Alpha Lion just simply couldn’t keep SuperHuman Supreme as a limited offering. Thankfully, they’ve now brought it back, and it’s not going anywhere anytime soon – SuperHuman Supreme is here to stay! For those of you that are looking for an intense, high-powered pre-workout experience, look into SuperHuman Supreme. It’s downright loaded with stimulants, and is extremely strong, which means it’s not for everybody. If you can handle it, SuperHuman Supreme can help you achieve workout intensity supremacy!

Note: In the above price listings, some stores may still have the older formula. For the 2020 version discussed on this post, look for “Juniper” on the label.