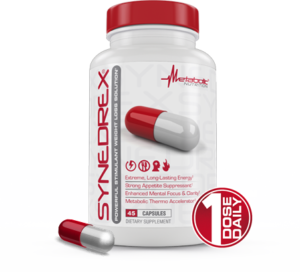 Metabolic Nutrition has revamped their flagship fat burner Synedrex to include DMHA and Eria Jarensis.

After having a blow dealt to them by the FDA (as well as Hi-Tech Pharma cloning the OG Synedrex with their Synadrene), Metabolic Nutrition is swinging back!

Thanks to their success with the past two versions of Synedrex, Metabolic’s garnered quite a reputation as one of the premier manufacturers of fat burners on the market. But we’re not sure how much longer that’s going to last.

The brand is back in the headlines as they’ve finally revamped their flagship Synedrex fat burner to include DMHA and “Eria Jarensis” in place of the previous generation stimulants that was once included in the formula (or AMP Citrate that was in the ill-fated second version!)

It was only a matter of time before we got a DMHA version, and here it is – and boy is it a disappointment!

We’ve covered them a time or two before on the blog, most recently when discussing their newest thermogenic supplements, Stimukal and ThermoKal. The former seemed decent enough, but the latter… not so much. Much in the same vein as ThermoKal’s highly-questionable proprietary formula, this prop blend leaves us completely scratching our heads as well.

All the details are just ahead, but before we get there, take a moment to check the best deal and sign up for alerts from PricePlow:

Note: In the price comparisons above, you will need to check to make sure you’re getting the version you want. The new version we’re writing about here will have a label that says “2-aminoisoheptane” on it, so hopefully you can find the older versions that weren’t so poorly-conceived.

As we’ve seen with other recent Metabolic Nutrition fat burners, Synedrex is a massive prop blend of ingredients commonly found in other fat burners on the market.

While the profile looks good, we have no clue how much caffeine or any other ingredient is in here! And there’s a huge question mark regarding why yohimbine is so high in the label!

Note: Doses listed below are based on 1 serving (i.e. 1 capsule).

Metabolic Nutrition recommends assessing your tolerance by taking 1 capsule in the morning with food. Do not use more than 1 capsule daily and within 12 hours of bedtime. 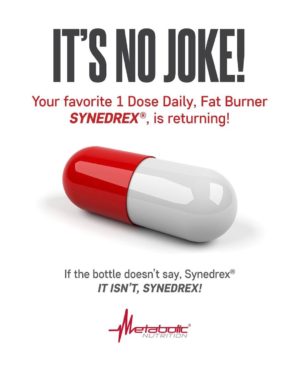 It’s no joke Synedrex is back, the only thing that is a joke is its formula

Takeaway: Metabolic needs to stop it with the prop blends

Seriously, what happened to Metabolic? ThermoKal and its possibly-high-proprietary-dose-of-berberine could possibly injure someone as labeled, and this either has enough yohimbine to kill a horse or it has at least three pixie-dusted ingredients. And we still don’t know caffeine.

Sorry folks, but we’re not touching this one. Not until some of this mess is clarified.

There’s something seriously wrong here. Did they mean to say yohimbe instead of yohimbine? If so, that might make at least a little sense. Until further notice, we’ll steer clear.