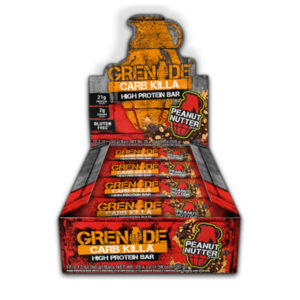 After much hype, the guys discuss and review the Carb Killa protein bars from Grenade, a UK supplement company.

The claim of best protein bar is in constant flux among the fitness population. We’ve stated over and over again that our top choice for taste and texture is OhYeah! ONE Bar. But, everytime we post a protein bar review on our YouTube channel, we’re told to check out the Carb Killa Bar by Grenade.

So, we did some digging into this bar to see what it’s all about, and even bought most of the flavors to try after hearing all the hype. We’ve got all the info ahead for these baked, protein bars.

But before we get to the details, take a moment to check the best deal and sign up for alerts from PricePlow:

Carb Killa Bars are a conglomeration of ingredients familiar to those who’ve had a protein bar a time or two before.

Most of the ingredients in here will be very familiar to you protein bar vets out there.

Each Carb Killa bar packs 23g of protein alongside 210 calories.

Each Carb Killa bar weighs in at 60g and contains the following nutritional breakdown:

One thing you’ll notice about the Carb Killa Bars is that the U.S. flavor options are somewhat different than their U.K. counterparts. Domestic flavor options now include:

These bars are super popular, especially if you can find them for cheap. Grenade has blown up and improved formulas since we originally wrote this post, so stay tuned for more updates!