VMI Sports has quietly been staking their claim on several parts of the supplement market – they’ve always been known for their high-stimulant K-XR pre workout, which uses a triple-stage caffeine threat that is not for the timid. But more recently, their Protolyte whey protein isolate powder (now with over half a dozen insanely underrated flavors) has caught everyone’s attention. 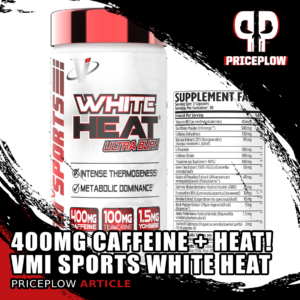 Whatever happened to high-caffeine fat burners that worked beyond energy?! It’s here from the brand behind K-XR with VMI Sports White Heat!

Yet while they’ve always had great carnitine supplements (both with and without “heat”), the brand has never had a capsule based fat burner – until June 2021!

In true style of the brand behind K-XR, VMI Sports has released a high-caffeine fat burner named White Heat, and once again, it’s not for the timid. Inside, you’ll get 400mg caffeine from three different forms — most of it time-released — and that comes in a two capsule serving.

This means you’re either going moderately hard, or all-in. White Heat is amplified with additional energy from theacrine and alpha yohimbine, so you know that this is going to perk you up for a long time, and then some. Good news is that it’s smoothed out with a couple relaxing ingredients in L-theanine and bacopa monnieri, a vastly underrated feel-good combination.

The heat in White Heat comes from grains of paradise and sweat-inducing GBB (along with the hefty hit of caffeine), and there’s added ingredients like fucoxanthin making this quite a diverse fat burner in just two capsules.

Caffeine lovers have been slightly abandoned by fat burners lately, so White Heat is the option if you want it strong. The analysis is below, but first check out our prices and sign up for VMI Sports news alerts:

In just two capsules, you get the following high-energy profile:

Also worth noting is that we have the higher quality form of Vitamin B12 in methylcobalamin, which we always greatly prefer over the cheaper cyanocobalamin forms.[77-80]

One cap or two – the choice is yours, but choose wisely!

Your options are pretty simple with White Heat – two capsules per day to get the full effects. The question is… are you going to slam them both at once, or space them out in the day?

Either way is fine, but note that it’s probably best to take one at a time to assess your tolerance first – that double capsule dose is going to bring it.

Years ago, too many companies did nothing but load caffeine (and not much else) into fat burners. After a while, the industry shied away from the practice… all while loading tons of caffeine into pre workout supplements! However, there is a market for high-caffeine weight loss aids, and it’s relatively unserved.

Now it’s time to bring the energy back, yet with other useful ingredients like grains of paradise, fucoxanthin, alpha-yohimbine, and banaba. In addition, the bacopa and L-theanine blend here should definitely make it feel good.

We expect no different from the brand that brought us K-XR (the OGs of the Miami Vice flavor system). The biggest surprise is that it took this long for VMI to come out with a capsule fat burner. They did it, and they did it in a high-powered way with White Heat.

Stack this one with either of VMI’s L-Carnitine supplements and get ready for some White Heat.