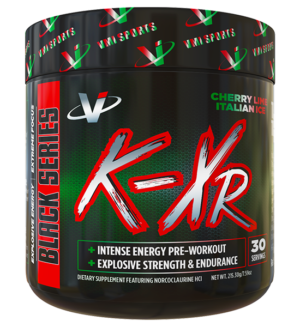 K-XR is the all new high energy, strength boosting pre workout from VMI Sports that is generating quite a buzz in the industry.

At the end of 2016, we introduced you to VMI Sports, a burgeoning supplement company based in Dallas, TX that was priming to take the industry by storm. At the time, VMI was preparing to launch their brand new high energy pre workout K-XR.

Well, the day has come, and K-XR is here in all its high-energy and focus glory, and we’ve got a full breakdown of it!

This is a high-energy pre workout supplement, and by high-energy, we mean 400mg caffeine alongside some rauwolscine!

We’ve got all the details below, but first, take a moment to check the best deal and sign up for PricePlow alerts:

K-XR contains three proprietary blends to first and foremost increase your energy, and each serving contains a total of 400mg caffeine! You’ll also get a bit of a pump and a hit of focus from the other two prop blends, but don’t kid yourself, K-XR is first and foremost about giving you the “oomph!” you need to cut loose on the weights.

We reached out to VMI Sports to see how K-XR has been fairing with the masses since its launch just over a month ago, and the feedback has been resoundingly affirmative that K-XR is a winner:

“We are thrilled at the massive success of K-XR since its launch… after receiving overwhelmingly positive feedback from beta-testers, as well as from tons of our retailers across the US – stamping that with a 10/10 score from a highly regarded product reviewer on SupplementReviews.com – we feel K-XR is the next generation of Pre-workouts.

A formula based on ingredients that work synergistically, and built to give you the monster high energy/high intensity workout you are looking for, without the crash.

The product is speaking for itself, and we couldn’t be more excited as we already have 2 new flavors in the works!” 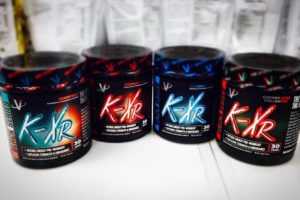 K-XR comes in four extremely unique flavors that you likely have never encountered before.

VMI Sports isn’t taking the easy route with flavoring, they’ve crafted some of the most unique flavor combinations we’ve seen in quite a while. K-XR is currently available in four flavors, including:

Pre workouts came in all sorts of varying energy loads, and K-XR is up there with the best of them. If you’ve tried some of the super-high energy pre workouts and had a somewhat off experience, it’s probably due to an incredibly high amount of pure caffeine anhydrous.

K-XR’s tri-blend of caffeine enables you to try the high-stim pre workout with a more sustained and smooth release of energy that should have you going and going and going like the Energizer Bunny long after you’ve completed your workout.

Can you handle it?!