Posted on December 8, 2022 by Mike Roberto and Nick Andrews | No Comments

Anabolic Warfare is known for their interesting approach to formulating common supplements. We’ve covered several of their Project Muscle supplements, and throughout the year, they’ve added even more than originally announced!

Today we’ll talk about Project GDA, Anabolic Warfare’s glucose disposal agent (GDA), which promises to provide consumers with the performance of a designer GDA supplement, but at a fraction of the cost. 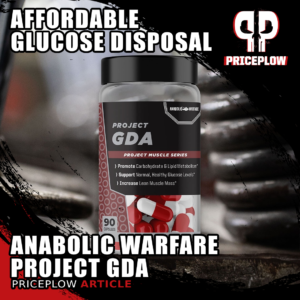 Anabolic Warfare Project GDA is a glucose disposal agent that can help drive your carbs into muscle tissue!

The goal here is to take Project GDA with carbohydrates in order to sensitize the muscle cells, making them store the carbohydrates as muscle glycogen rather than fat. This works best when training regularly, which we suspect is no issue for anyone looking at supplements from a brand named Anabolic Warfare!

The issue is that many GDAs are very expensive. Project GDA provides a lower-cost alternative, especially useful for those who are new to the space and want to try trusted ingredients that aren’t over-zealously dosed.

In a single 3-capsule serving of Project GDA from Anabolic Warfare, you get the following: 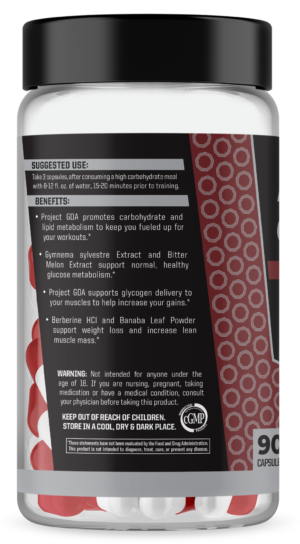 We instead prefer to take Project GDA before eating carbs!

Take three capsules before your largest carbohydrate-based meal — all the better if this is your pre-workout meal, so that you can drive as much carbohydrate as possible in the muscle glycogen!

We love the unusual-yet-effective ingredients in this formula – banaba and bitter melon are perhaps the two most interesting, At the same time, we’d definitely like to see the industry pay more attention to vanadyl sulfate.

Overall this formula is an interesting blend of the old and new. Alongside chromium, vanadyl sulfate is one of the OG GDA ingredients. Berberine is an old glucose disposal mainstay, and although this dose isn’t the largest, we think the big doses of chromium and cinnamon can help make up for it — and it keeps the price down for beginners.

Grains of paradise has come into vogue more recently, but is by now one of our favorite ingredients. We love seeing a WAT-to-BAT converter finish off this formula, as this is a great long-term investment in glycemic control and body composition.