In the supplement industry in general — but especially fat-burning supplements — there are a few mainstay ingredients that are backed by lots of research. These ingredients show up in tons of formulas because of their reliability. But interestingly enough, it’s not that common to see all the mainstays together in the same formula.

This “back to basics” approach is why we appreciate ALLMAX Rapidcuts Thermo: Non-Stimulant Fat Burner. For the average consumer who’s just getting into supplementation and doesn’t know where to start, a product like Rapidcuts Thermo is definitely a good product to consider. 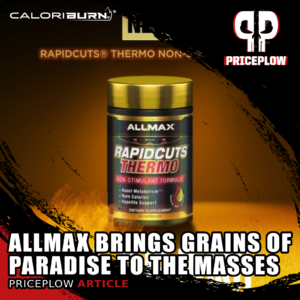 As grains of paradise aficionados, we’ve found that the heated weight loss ingredient is well-accomplished in the world of sports nutrition supplements, but hasn’t made as much impact in other weight loss circles.

Thanks to NNB Nutrition’s innovations with CaloriBurn GP, combined with ALLMAX’s use of “mainstream” Amazon-friendly ingredients such as CLA, green tea, garcinia cambogia, and green coffee bean extract, we have a stimulant-free supplement that can get marketed to the masses in North America and introduces them to our favorite fat burning spice.

This combines two weight loss generations, bridging the gap between ingredients familiar with dieters in the late 2000s and newer technologies we’re more excited about now, like CaloriBurn GP. It’s all covered below, but first use PricePlow to sign up for our alerts and check prices:

Three capsules of ALLMAX Rapidcuts Thermo: Non-Stimulant Fat Burner is the daily recommended dose. In that, you get the following: 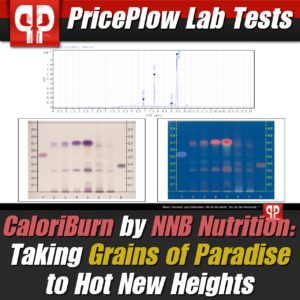 CaloriBurn is not just HPLC tested, but HLPTC, so you know it’s real GP!

ALLMAX Rapidcuts Thermo Non-Stimulant Fat Burner is a product with some time-tested and trusted ingredients. However, it’s time to introduce readers who are searching for those ingredients to the real powerhouse – grains of paradise powered by CaloriBurn GP. This blends the “old school” with the new, and that’s something we’re always good with if it brings dieters a new human-researched ingredient to test out.

Realize that a few ingredients in here are what we consider “under-dosed”, and if you’re not eating a nutrient-dense diet, you may get serious benefits from additional carnitine, chromium, and choline. However, our take is that most readers will come for the garcinia and CLA, but leave with the grains of paradise – and that’s OK by us. The way ALLMAX is marketing it, they’re using it as a low-cost addition to their stacks, so the price is right as well.

If you aren’t taking any other carnitine supplements and don’t eat much meat, you may want to consider taking more than the recommended daily serving of three capsules per day… but don’t be surprised if the grains of paradise and GBB heat you up beyond expectations!