A team of researchers at Texas A&M’s Exercise and Sport Nutrition Laboratory has published a new study in Nutrients, where they put Nutrition21’s nooLVL gaming supplement ingredient to the test and discovered some incredible results just 90 minutes after supplementation.[1] 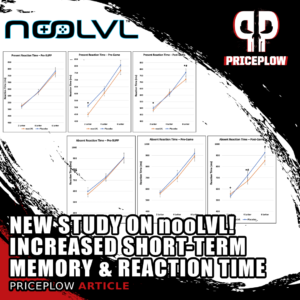 A new study is on its way from Texas A&M where nooLVL was shown to improve Short Term Memory and Reaction Time!

Nutrition21 is a leading ingredient developer in the supplement industry that also serves as a groundbreaking research company. They supply some of the most well-studied ingredients on the market, such as Chromax (chromium picolinate for diet applications) and Nitrosigine (inositol-stabilized arginine silicate for nitric oxide / pre workout applications).

This latest research study, however, was performed using nooLVL, a supplement ingredient developed and patented for gaming and esports applications which uses inositol-stabilized arginine silicate but adds an optimized amount of additional inositol to boost cognitive performance in addition to its nitric oxide and blood flow improvements.

The trial, which was a double-blind, randomized, placebo-controlled, crossover study, was performed on 26 participants (experienced gamers) and found that nooLVL supplementation enhanced some measures of short-term memory, reaction time, reasoning, and concentration.[1] It was sponsored by Nutrition21 and presented as a poster at the 2021 ISSN conference (International Society of Sports Nutrition).[2]

Nutrition21 published a press release announcing the study,[3] but we get into further details below. First, make sure to sign up for our Nutrition21 news alerts to ensure that you don’t miss out on any future research:

Nutrition21 leads the way in gaming supplement research with nooLVL

With the surge of competitive gaming and esports, there has been an explosion of products marketed towards gamers. Alongside the numerous devices and software packages made to improve gaming performance, gaming supplements have had a major rise in popularity.

Nutrition21 is a leader in the industry and takes huge steps towards making supplements safer, more effective, and transparent! They have funded several studies, including the one we’re discussing today.

If this is your first time reading about nooLVL, we provide the full background story and original study in our article titled nooLVL: Next-Gen Focus Ingredient for Gaming Supplements. Below, we get straight into the new research out of Texas A&M in 2021:

While we’ve seen nooLVL improve various cognitive, energy, and accuracy metrics on experienced gamers playing modern games,[4] this study aimed to look at the ingredient’s short-term reaction time and cognitive effects. This is important to understand because supplement users prefer to see results as soon as possible, and gamers generally expect gaming supplements to be experiential.

The Texas A&M researchers recruited 26 healthy participants (average age 23 years old), and ensured that they recorded their diet from four days and could not drink atypical amounts of stimulants or foods rich in arginine or nitrates for three days before study visits. The researchers randomly assigned them to the nooLVL group or the placebo group (maltodextrin) to start.[1,2]

The study’s methods, as discussed below.[1,2]

The results: nooLVL improvements in mental reasoning and reaction time! 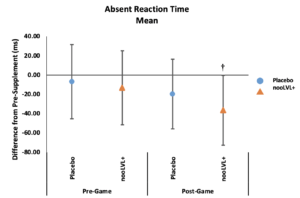 The biggest improvements were in the Sternberg test, where the nooLVL group had statistically significant improvements compared to the placebo group.[1,2] This test specifically measures reaction time, short-term memory recall, and mental reasoning and is given with ascending difficulty and complexity, making it an all-around fantastic test for gamers.

Per the data table below, nooLVL performed admirably in nearly all tests, even when statistical significance wasn’t achieved:[1,2] 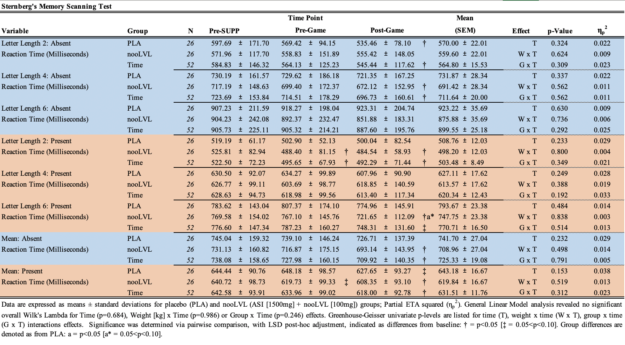 Numerical results from the study. Even those that weren’t statistically significant impressed us![1,2]

These results — especially in reaction time — demonstrate that nooLVL can significantly improve effects that are highly relevant to gaming. 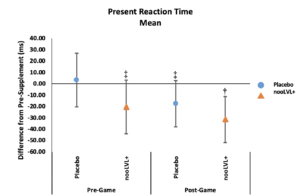 This suggests that using nooLVL gave the participants a better ability to store and retrieve random data through short-term memory, especially as it increased in complexity.

Additional benefits in the nooLVL group

Additionally, there were some improvements in the nooLVL group that were positive, but didn’t reach significance. This includes the Pre-Game Sternberg 4-letter Present Reaction time test just 15 minutes after supplementation, and better changes maintained in Go-No-Go Mean Accuracy and Reaction Time, Psychomotor Vigilance Task Reaction Time, and Cambridge Post-Game Visiospatial Processing and Planning.[1,2] Importantly, the Sternberg test is often used as a test of working memory. In this study, nooLVL was able to significantly increase the speed and reaction time of the Sternberg Test in multiple letter lengths versus the placebo group. This aligns with earlier research on tests where nooLVL also shows significant improvements. 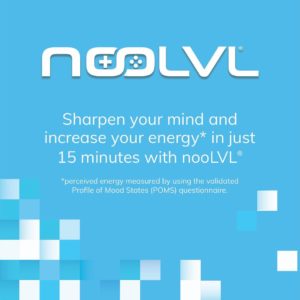 Lessons learned: nooLVL works in the short-term and after mentally fatiguing game play

Ultimately, this study is extremely encouraging, because it showed improved effects in just 15 minutes as well as at 90 minutes post dose, leading us to believe that the improved nitric oxide levels and blood flow provided with inositol-stabilized arginine silicate[5] on top of the additional inositol that composes nooLVL makes for a gaming supplement ingredient that improves some important short-term metrics – the first time gamers use it!

The researchers close their abstract with the following, which sums things up nicely:

“Results provide evidence that ASI + I [nooLVL] ingestion prior to playing video games may enhance some measures of short-term and working memory, reaction time, reasoning, and concentration in experienced gamers.”[1]

In addition, the conclusion begins with the following, which also indicates the strength of the study:

“In conclusion, results of the present investigation provide additional evidence that acute supplementation of ASI + I can affect cognitive function and memory in competitive gamers. The strength of this study was that it evaluated the acute effects of ingesting ASI + I on a spectrum of cognitive function tests in experienced gamers.[1]

It’s important to note that this study was performed on well-known cognitive tests, but not on gaming performance itself. Although this makes it difficult to claim that gaming performance would specifically be improved, it lends itself to greater scientific credibility, since the tests are standardized and trusted in the research community. 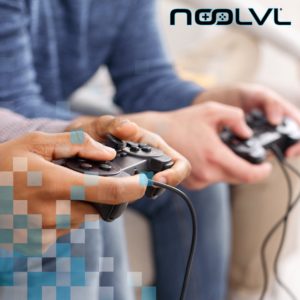 nooLVL is made for gamers, but we’re even starting to see it in focus-driven / nootropic pre workout supplements so that everyone can enjoy these benefits!

The good news is that nooLVL’s performance improvements were found in a test that closely resembles what is needed in gaming: short-term memory and reaction times in a scenario where tests get more difficult as the test progresses.

On top of the previous clinical study showing non-stim energy and improved accuracy,[4] Nutrition21 now has two incredible bullet points showing efficacy for both short and medium-term cognitive performance, and supplement brands and consumers using the ingredient can be confident of its effects.

To learn more about nooLVL’s composition and the original study published in 2019, see our article titled nooLVL: Next-Gen Focus Ingredient for Gaming Supplements. You can also see Nutrition21’s official nooLVL page on Nutrition21.com and their articled titled “Start Sharp, Stay Sharp, and Win Big with nooLVL“.

This article may be updated when the Texas A&M’s study is fully published, so if you’re interested, please sign up for our Nutrition21 news alerts below:

Note: This article was originally published on July 29, 2021 and updated on November 15, 2021 once the data was formally published in the journal.