We didn’t see this one coming! After PEScience’s recent Shift to a new stimulant-free fat burner in LipoVate, the brand is replacing their Norcodrene capsules with Alphamine Caps! Same energy component as the deliciously popular “Athlete’s Energy Drink”, but with some new tools in the shed and in convenient pill form factor!

Today, we’re going to talk about fat loss, but we’re also going to focus on energy. 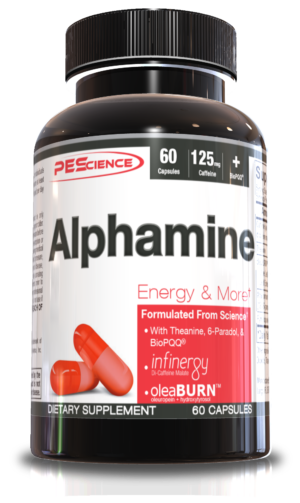 How often do you feel run down, tired, and like you’re just dragging through the day? Bad dietary choices can hit you quickly, and many of us can frequently find ourselves needing a pick-me-up in order to stay on our game.

That jolt of energy, needed at the dreaded “2 P.M. workday crash” or before an intense workout, has led to quite a robust market for energy-focused supplements. But not all of these energizing supplements are made the same. Some use cheap ingredients, while others may be severely underdosed. Or worse, they’re just overloaded with caffeine.

In PEScience’s new product, Alphamine Capsules, we may have something that does much more than those run-of-the-mill products. In replacing their former capsulated fat-burner Norcodrene, PES has developed an incredibly well-rounded weight loss supplement that gives you a complete form of energy, in addition to some thermogenic enhancement.

These capsules are based off of a similar stimulant blend as Alphamine powder, but brings even more using a different pathway. Here, PEScience targets you with both stimulant-based and stimulant-free energy, providing you a clean energy that most other products lack. When you consider the track record of PES (such as with LipoVate), doing what the competition didn’t think of is exactly what we’ve come to expect!

Get ready to meet the Power of PQQ

In this post, we’re going to break down Alphamine Capsules’ label, and all the intriguing components of it (hello, PPQ!) But, before we get to that, please be sure to sign up for price alerts and deals through PricePlow, your trusted source for deals, diet research, and reviews in the game!

PEScience is known for some of the best supplements on the market. For years, they’ve been putting out some of the highest-quality, most effective products you can find. It’s a reputation they’ve earned, yet still aren’t satisfied with – they also test some of their products in the lab, through their MySelect program to ensure what hits the shelves is impeccable!

One of their most popular products is their thermogenic energy-focused powder, Alphamine. Dubbed “The Athlete’s Energy Drink”, it’s built to provide athletes with the boost of energy they need, when they need it. It’s perfect for clean energy to get you through the day (or a great cardio workout), with some additional thermogenic and nootropic benefits tossed in.

Alphamine Capsules follows the same path – clean energy with fat-burning capabilities. However, the capsule form does things a bit differently than its cousin. What it lacks in nootropics it more than makes up for in a novel way to boost energy levels.

Rather than rely solely on stimulants, these caps also deal with “molecular energy”, the type of functional energy created by the mitochondria within your cells. With this comprehensive approach, we’re left with something special – an all-inclusive energy formula, designed to get you moving and burning fat in the process!

Now let’s get into what makes the stuff so effective!

Dosage – how should I use Alphamine Capsules?

PEScience loads each bottle with 60 capsules, and lists each serving is as 1 capsule. However, based on the dosages of each individual ingredient, you can absolutely take 2 capsules. Whether you want to split it up over the course of the day, or take 2 at once (250mg of caffeine is quite doable for most people), we’d actually recommend 2 capsules per day. That not only gets you to a great dose of the fat-burning ingredients in play here, but puts you around the clinical dosage of PQQ, too! 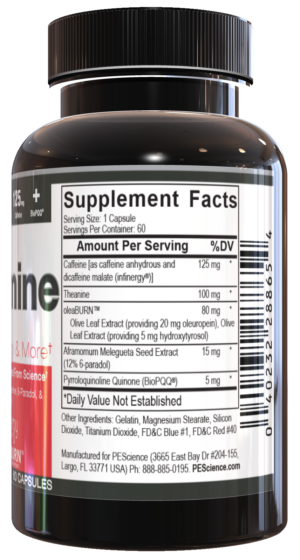 The back Alphamine Capsule Label

If you’re familiar with PEScience, then you’ve probably come to expect quality, effective, oftentimes novel ingredients being formulated into their supplements. With Alphamine Capsules, things are no different. Taking inspiration from their highly-touted Alphamine powder, “the athlete’s energy drink”, they’ve packed a very comprehensive formula into a much more convenient capsule.

PQQ is right in line with what we’re seeing the diet community needs, as there is a serious problem (caused by our poisoned food supply) regarding “insufficient cellular energy”. LipoVate hits the blood sugar side of things exactly as we want, and this hits energy likewise. Even PEScience’s take on mass gainers is similar to ours (Select Smart Mass), so it’s great to see a brand we can agree with so much.

Providing a solid combination of stimulant- and cellular-based energy, PES has made a product that’s somewhat the first of its kind. We haven’t seen anything that takes this type of wholesome approach to providing energy, much less while also touching on fat-burning simultaneously.

With Alphamine Capsules, you have more than a resource for that late-day “pick me up”. You have a way of getting energy, both absorbed and internally produced, in addition to a tool in keeping off excess fat. Sure, this isn’t a stimulant-packed formula… but it’s not supposed to be. It’s the clean, natural, novel supplement you should be reaching for when that 2:00 wall hits!