Posted on September 13, 2022 by Mike Roberto and Nick Andrews | No Comments

We always get excited about new products from MyoBlox, a hip and savvy lifestyle-and-performance brand from the San Francisco Bay Area that took the supplement scene by storm in 2017.

With flashy neon visuals that hearken back to hypebeast streetwear fashion — a popular style these days — MyoBlox has proven to be equally rigorous as they are elegant. But as time marches on, consumers demand bigger, stronger, better. And they’re about it get it thanks to a new… breakthrough ingredient: 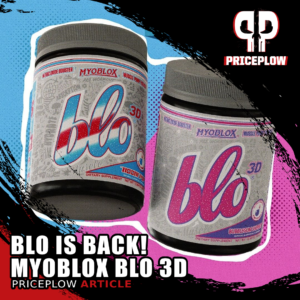 Myoblox BLO is Back with BLO 3D

Myoblox is bringing us their updated stim-free pre-workout, changing the name from BLO to BLO 3D. If you’ve been following sports supplements this year, you know what that means — the inclusion of the 3D Breakthrough pump ingredient!

Stim-free nitric oxide boosters are great for many reasons. Not everyone needs huge doses of caffeine, rauwolfia, yohimbine, and other stimulants in more “modern” pre-workout formulas. They just want the performance without the buzz or jitters. Evening gym goers are particularly affected – nobody wants to slam 300 milligrams of caffeine right before their 7 p.m. lifting session. (And if you do, we have an article on the new LOCO coming next.)

And sometimes, even with a stim pre-workout, you want to push even more nitric oxide induced blood flow into your muscles. No matter what the reason, BLO 3D has a sharp formula and launched with two cool flavors, so let’s cover it below:

Note: If you were a fan of the previous version of BLO, check out our original Myoblox Blo product page. Once it’s gone, it’s gone!

In a single 2-scoop (18 gram) serving of BLO Muscle Pump from MyoBlox, you get the following: 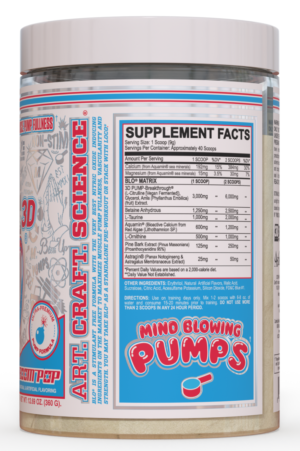 Another look at the label

Want to try something fun? Many love the LOCO high-energy pre-workout, but don’t forget that you can also stack it with the highly-caffeinated MyoBlox Skywalk nootropic!

Conclusion: BLO Up Your Arms

True to MyoBlox form, we have some solid mainstay ingredients — given in huge doses—alongside some cutting edge, next-generation ones.

We particularly enjoy seeing pine bark paired next to 3D PUMP Breakthrough, providing a very unique blend of both Amla fruit extract with pine bark — alongside citrulline and glycerol of course. Truth be told, there are many pine-tree derived supplements that deserve more attention and use – more or less the entire pine tree really seems to be a slept-on superfood.

Drink water with this one!

Remember to drink bigtime water!! Anytime you see four very well-dosed hydration ingredients together, it’s time to drive some water into those cells:

So drink up, and get ready for some BLOwn-up training. Next up, we have the new LOCO… get ready and sign up for alerts below: