When it comes to insanely loaded and innovative formulas, Morphogen Nutrition has built an incredibly impressive reputation as a brand to be reckoned with. Driven by the desire to create change in sports supplements, Morphogen offers a wide array of effective, efficacious products that cover various areas of nutrition and health. Whether you’re looking for a pre-workout (Alphagen), a whey protein isolate (Protegen), or even an organ-health promoting product (MorphoPrime), odds are Morphogen has something that fits the bill.

A sleep aid that helps you burn fat? MitoBurn enters a new category 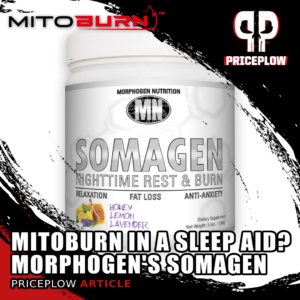 An extremely-loaded sleep aid with some added fat burning support? Sign us up for another incredible Morphogen Nutrition supplement!

The brand has also formulated a sleep aid, though they’ve taken a rather unique and exciting route in doing so. Somagen is Morphogen’s potent sleep-promoting formula that offers more than just sedating and calming ingredients. This product utilizes MitoBurn L-BAIBA, an innovative fat-burning ingredient from NNB Nutrition to deliver non-stimulatory exercise-based benefits on top of sleep-supporting effects.

While the majority of the ingredients in Somagen make it an effective sleep aid in most applications, inducing a bit of extra fat oxidation makes the product particularly useful for dieters and other individuals monitoring their body fat. Talk about creating change — this multifaceted approach isn’t something we see that often!

In this post, we’re going deep into Somagen’s formula, which is packed with strong calming, anxiolytic ingredients that can help improve your sleep, as well as MitoBurn fat-burning and mitochondrial function. Before we get to that, subscribe to PricePlow news and deal alerts so we can help you find great deals on all things Morphogen Nutrition.

Note: the following write-up is as intense as Morphogen’s formulas. Get ready for mechanisms, studies, and tons of science.

Here’s what each one scoop (7.7 grams) serving delivers: 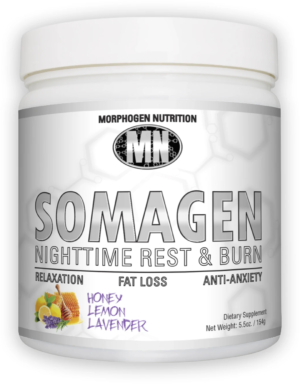 Somagen’s sleep-boosting formula launched with only one flavor — Honey Lemon Lavender. Falling in line with the brand’s ability to create unique tastes, this is an excellent option for Somagen. This flavor embodies the calming, relaxing state of mind you desire as you get ready for bed. Mix one scoop with between 6 to 12 ounces of water, and enjoy it either cold or warm!

Morphogen Nutrition is known to get pretty creative with their flavors. For example, Protegen, the brand’s excellent whey protein isolate, has double-digit flavor offerings. They’ve shown that they know how to make a great-tasting, effective supplement, and they’ve carried that expertise over to Somagen.

The importance of sleep is well-understood at this point, as it has an incredible influence on our overall health. Ensuring we’re getting enough rest promotes brain health, proper organ functioning, and an efficient metabolism, among many other things.

We didn’t think we’d see a sleep aid with MitoBurn inside, but here we are, and as always with Morphogen Nutrition, we’re impressed

Seeing an opportunity to create a new formula, Morphogen sought to flesh out this relationship between metabolism and sleep. While the body does expend calories during sleep, it certainly doesn’t do so anywhere close to the rate it does when we’re active. What if there was a way to promote sleep and metabolic functioning at the same time?

Somagen is Morphogen’s answer to that very question. This sleep aid not only provides sleep-inducing ingredients but also takes aim at fat-burning. Using MitoBurn to ignite thermogenesis, Somagen delivers benefits on two fronts simultaneously. These effects can be leveraged regardless of whether you’re in a dieting phase or not — but you may just appreciate it more if you’re trying to drop a few pounds!

With your training, diet, and lifestyle squared away, introducing Somagen into the fold could further elevate your sleep quality — and body composition goals — to higher levels.