Posted on October 28, 2022 by Mike Roberto and Nick Andrews | No Comments

Today we’ve got something really special for you! If you’ve been following along in the PricePlow Discord, you know we’ve been running monthly podcasts with Glaxon leaders Joey Savage (chief science officer and formulator) and Michael Bischoff (founder and CEO). 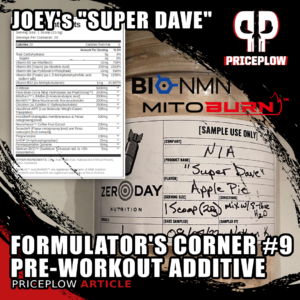 In Formulator’s Corner #9, we publish Joey Savage’s design for a Pre-Workout Support Supplement to take the standard pre-workout way further. Of note, there’s a massive 2000 milligram dose of BioNMN!

Today, we merge the two, discussing a pre-workout supplement support formula that Joey made for one of our key followers, Dave Cook.

In one of our recent public discussions in the Discord, we brought Dave “on stage” after winning a supplement trivia contest, and Joey offered to build a stack to help Dave achieve his goals.

The duo ended up building an additive formula to support your existing pre-workout supplement, code named “Super Dave”. It consists of a laundry list of incredibly-dosed ingredients selected to complement and round out the industry’s standard pre-workout formulas. Meaning, you won’t see anything like caffeine, betaine, beta-alanine, or citrulline inside.

Instead, this is a cocktail of other ingredients, and many of them should be considered for next-generation pre-workout supplements. The doses are all huge (eg. 2 grams of both MitoBurn and BioNMN), so no formulator can put all of this into a finished product and keep it affordable, but the effects were so strong for Dave that there’s clearly something big happening here.

Consider this a thought experiment that formulators around the globe can pick from to incorporate into their own products so that we don’t get stuck with the “same old pre-workout”. Some of these ingredients, like BioNMN, are how we believe you can take an ordinary pre-workout to extraordinary.

Let’s get into it, but first, be sure to sign up for our future Formulator’s Corner news alerts:

In a single 15.5-gram serving of Joey and Dave’s Formulator’s Corner pre-workout support, you get the following: 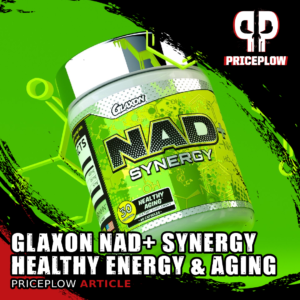 This was a fun thought experiment – we’re super stoked to see such high doses of BioNMN and MitoBurn from NNB Nutrition. These are two of our favorite ingredients, so we love having the opportunity to write about them.

Of all of the above ingredients, BioNMN is the one that we’d love to see in more pre-workouts, and PQQ could make a unique non-stimulatory addition as well.

Additionally, the inclusion of pregnenolone is also super interesting, and an avenue that we hope the industry will consider for further exploration and development.

Stay tuned for future Formulator’s Corner segments, and thanks to Joey and Dave Cook for putting this one together!