Not long after the release of Raw Nutrition’s Ignite fat burner, which we called “the strongest fat burner we’ve seen in a long time”, the brand is back at it, this time attacking testosterone – using a similarly strong approach, but with a different mindset. 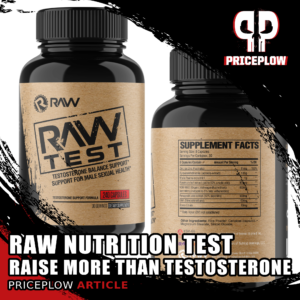 Raw Nutrition Test: Raise more than just testosterone. This is an all-around wrecking ball of a supplement, but there are definitely some lesser-traveled ingredients inside!

Get ready, because this will bring more than just testosterone-enhancing ingredients.

Over the past couple of years, there have been several natural testosterone boosters that do everything they can to improve free and total test using clinically-backed ingredients, and they’re all starting to look the same. Raw Test is doing things different.

Built from the ground up. Get ready for something different with this one!

Nearly everything on the market is anchored by KSM-66 Ashwagandha, which we do have here as our foundation, with data even supporting a test boost in healthy young users. But where Raw Nutrition differentiates is with the alternative compounds and body recomposition effects.

We’re talking about a major dose of Bryonia Laciniosa extract for testosterone, muria puama extract for libido, and ursolic acid for body recomposition benefits. All backed up with some estrogen support and boron and critical minerals in boron and zinc.

If you’ve used some of those “same old same old” test boosters — which we do love — but are looking for something different and slightly more aggressive with admittedly less human clinical data, then Raw Test should be on your list to try.

That’s the short story. Below, after we check prices and have you sign up for our Raw Nutrition news alerts, we get into the longer story:

Raw Test is anchored by KSM-66 Ashwagandha – like most competing products. So we can confidently say that this supplement is going to “work”, because we’re confident that ashwagandha works.

The question is, how much more can Raw Nutrition make it work? Much of it depends on this first ingredient, bryonia laciniosa extract. The following is what you can find in a day’s dosage of 8 capsules, although it’s recommended to split these into four capsules twice daily:

Raw Test is here. And we are excited about this one.

Raw Nutrition suggests taking four capsules twice daily, split into an AM and PM dose. You could take 8 capsules all at once if you must, but split doses are preferred, as they mimic most of the studies and will keep the minerals and herbs in the bloodstream more consistently.

Conclusion: A test booster that does more 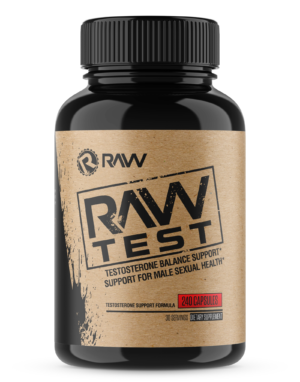 Is 8 capsules a day worth it? We think so. Split those doses into 4, twice a day.

Raw Nutrition makes a very compelling supplement in Raw Test here. We know what we can expect with the ashwagandha, DIM, boron, fenugreek, and zinc. We don’t know what everyone should expect from Bryonia laciniosa or Muira Puama, and that excites us.

Further, we are confident in ursolic acid, and excited to see it here because it’s simply not used frequently enough.

It all makes for an extremely unique supplement that is admittedly not going to be for the most timid, cautious, or conservative of users, since we’re strongly relying on animal data for the highest-dosed ingredient. If that’s you, then dig deeper into the sources and consider it. If that’s not you, then that’s fine – there are dozens of other supplements that use ashwagandha, or you can get Revive MD’s solo ashwagandha and start there.

This is the kind of supplement that fires us up, though. And hopefully it’ll fire you up too.