We recently covered a new dietary supplement ingredient known as NMN, short for Nicotinamide Mononucleotide. NMN is an oral precursor to NAD+, a critical component to cellular health and energy. A new study published in Science has shown that NMN improved muscle insulin sensitivity in overweight women.[1]

This publication begins to confirm in humans what we had already learned from animal models: NMN is the superior supplemental NAD+ booster, and has metabolic benefits that go beyond just “anti-aging” claims it was originally marketed under.

This article covers the study and details a new NMN ingredient on the market. But first, an extremely quick refresher on NAD+ and NMN: 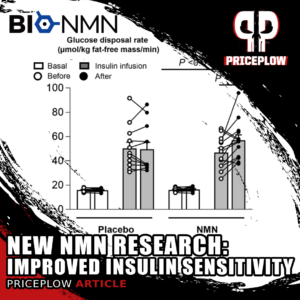 A new research study on overweight, insulin-resistant women has shown that NMN supplements improve muscle insulin sensitivity. What does this mean for us?

A brief background on NAD+ and NMN

As we age, NAD+ levels decline, and given its importance in DNA repair and mitochondrial energy,[2] improving NAD+ status is likely to be anti-aging (geroprotective) and should improve overall health. Numerous health benefits are associated with better NAD+ levels, and inversely, there are many negative consequences associated with low NAD+ levels.[3]

As an intermediate in the formation of NAD+,[4] supplemental NMN is believed to be the quickest way to boost NAD+ to achieve the associated metabolic health and anti-aging benefits. This is because NAD+ itself isn’t orally bioavailable and IV treatments are costly and don’t really make it into the cells anyway. Competing ingredient NR (nicotinamide riboside) is also unstable, leaving NMN as our best option for boosting NAD+.

In the article linked above, we featured NNB Nutrition’s high-bioavailability ingredient named BioNMN, where we suggested a dosage of 250mg twice per day. It turns out that the study covered today used exactly that dosage! So let’s get into that study, but first, be sure to sign up for our NMN news alerts so that you can get notified when more research is published and discussed:

Researchers at the Washington University School of Medicine in St. Louis recruited 25 overweight, insulin-resistant / pre-diabetic women and enrolled them into a double-blind, placebo-controlled study. 13 women were in the treatment group and 12 were in the placebo group.

The Washintgon University School of Medicine Put out a nice press release about the study as well.[5]

Before and after the study, researchers used a hyperinsulinemic-euglycemic clamp to determine how well the muscles take up glucose (this is the gold standard for measuring this effect, scientifically known as insulin-stimulated glucose disposal – see sidebar down to the right).

The figure below (2A from the article) shows something very interesting: significantly increased glucose disposal rate in the NMN group.[1] 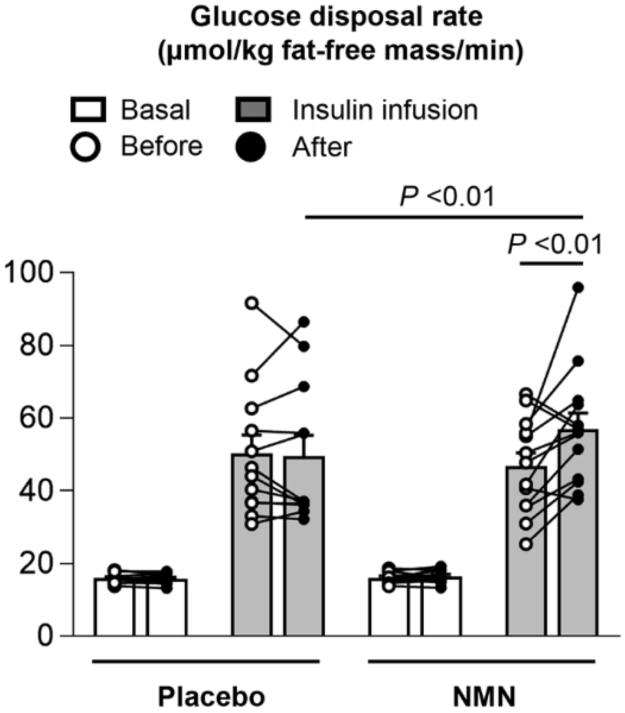 As you can see, placebo did not have any increased glucose disposal rates. But on the right, we have the NMN group, which did have a significant increase in glucose disposal after insulin infusion – in every participant![1]

What is a hyperinsulinemic-euglycemic clamp?

With this type of a “clamp”, the researchers will continuously infuse insulin into the subject, raising insulin to a static level (such as 100μU/ml). They then simultaneously raise their blood sugar to a static number (such as 125mg/dl), and achieve a steady state.

Using a closed-loop control system, they’ll set the infusion to vary the amount of glucose needed to hold the participant constant at that level (125). They then measure how much glucose is needed to keep it at that level, indicating glucose disposal/uptake into the tissue.

This means that the NMN group became better at putting glucose into their muscles in the presence of insulin! It was about a 20% improvement. While this is significant, and every participant improved, there’s clearly one “hyper-responder” that you can see in the NMN group.

Finally, the press release from the University of Washington states that “NMN also improved expression of genes that are involved in muscle structure and remodeling.”[5]

This wasn’t a massive study, so we have to take that into consideration. However, in our world of sports nutrition, yes, 20% improvement does matter. In our world, which is sports nutrition (no offense to the anti-aging readers out there), athletes will go to extreme lengths to improve even just a few percentage points.

If a supplement like BioNMN enables them to eat any substantial amount of carbohydrate without adding unwanted body fat, we have something worth discussing.

Further, as we can see, there are some individuals who may greatly benefit from NMN, and we wonder if our hyper-responder had an NAD+ deficiency that was “solved” with NMN, even if only temporarily throughout the course of the trial.

No weight loss — but none expected 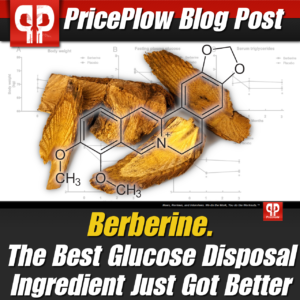 Could NMN be a new insulin sensitivity ingredient to pair with berberine / dihydroberberine (GlucoVantage)? It’s worth exploring!

It’s worth noting that there was no major fat loss or weight loss in these groups[1] – but we’ve never really considered NMN a “fat burner” type of ingredient anyway. It’s here for mitochondrial energy and efficiency, and better glucose disposal leads us to believe it can achieve those and more.

Conclusion: NMN is worth a look for the right person

On this site, we discuss a class of compounds known as glucose disposal agents (GDAs), anchored by powerhouse ingredients like berberine and GlucoVantage (dihydroberberine). The general goal is to get more carbohydrates into muscle cells (by way of glycogen) as opposed to fat cells or liver cells… or worse, just having chronic high blood sugar.

BioNMN had not been considered an ingredient for these types of supplements, but perhaps now it should.

Insulin sensitivity is worth fighting for 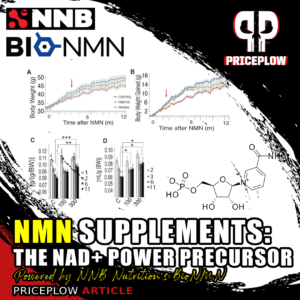 Need more clean energy? Then there’s a good chance you need more NAD+ — and an incredible way to generate more is with NMN Supplementation.

We often see NMN (and its ill-fated supplement competitor, NR) discussed in anti-aging circles. We do believe insulin sensitivity is incredibly important for a healthy lifespan — but a diet that removes processed foods containing refined carbs and/or toxic seed oils will do far more for you than a supplement or even a drug will. Yet insulin sensitivity and mitochondrial health improvements are benefits we never shake a stick at BioNMN should help with anti-aging applications.

But where we’re excited here is for our athletes looking to do even more. And BioNMN may be one way we can get that much more glucose into the muscles, ready to hit the next workout, game, or even the stage.

You can read more about NMN and BioNMN in our articles titled NMN Supplements (Nicotinamide Mononucleotide): The NAD+ Energy Precursor and BioNMN: A Reliable NMN Supplement Ingredient.