Run by Dr. Domenic Iacovone and elite fitness trainer Matt Jansen, Revive MD has shaken up the sports supplement industry with issue-specific health formulas that bring incredible clinical dosages. Some prime examples are Revive MD Lipid, Heart, and Prostate. The line is targeted towards high-end athletes, and early on in their career, most other brands in the industry ignored or downplayed the idea, continuing short-termed focus on pre workout supplements and candy flavoring.

Yet, Revive MD’s monstrous success showed that high-end athletes do care about their whole body health and not just their looks or performance. With the brand’s rise, we’re now seeing those same naysayers copy Jansen and Iacovone’s model and formulas left and right.

Not just a “nootropic” for focus, Revive MD’s Brain also works on mood and general well-being alongside the cognition boost!

This time, however, Team Revive is taking a page out of the industry’s playbook – developing a nootropic supplement meant to improve cognitive performance – but they’re bringing their whole health ethos into the fold.

With formulas like Heart and Prostate, it was only a matter of time before the BRAIN became a focus. Revive MD is making the Brain+ nootropic their way — by focusing on whole brain health and cognitive function.

A brain health nootropic with lithium?! Get in here!

On top of standby favorites like choline, carnitine, phosphatidylserine, and tyrosine, Brain+ adds some punch from Rhodiola rosea and a high-quality blend of B-vitamins (the good ones)… and even has some lithium added!

There’s even more than that, so we dig deep into the label below, but first, make sure you check our coupon-backed prices and sign up for PricePlow’s Revive MD alerts, they’ve got far more on the horizon:

Get ready to pound through ten sets of ingredients in Brain+, all of which come in four capsules. There’s no caffeine, so you can stack with your coffee, energy drink, fat burner, or pre workout.. or just take them solo.

In the article, we’re going to combine the B-vitamins in their own area, and the two choline sources as well.

Revive MD suggests taking 4 capsules per day. We’d generally recommend this in the morning, but some may want to test taking 2 in the morning and 2 mid-afternoon before the “slump”. This will help space out the ingredients and bring some potential sleep improvements to boot. 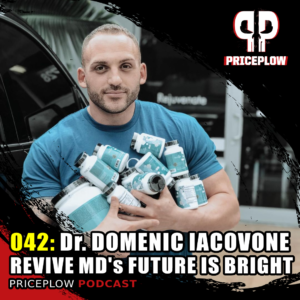 Revive MD comes out swinging in 2021! Learn about it in Episode #042 with Domenic Iacovone

Now that’s what we call a brain health supplement. You may have come here expecting a “nootropic” geared towards cognitive focus. Those benefits are great, and they’re included in this supplement, but there’s also so much more.

On top of straight “focus”, we also have mood enhancement, stress support, deficiency protection, and prevention against cognitive decline. One of the best things to pair with this, on top of any organ-specific supplements you like from the brand, could simply be the Revive MD Omega-3 supplement. Those looking to hit the anti-anxiety angle harder may also enjoy Revive MD Calm. There’s not much else here that isn’t covered in terms of getting your brain back on track.

Nootropic “newcomers” in saffron and lithium meet our “standard” ingredients in choline and carnitine, and with the help of Rhodiola and some others, Revive MD BRAIN+ should be unlike anything you’ve felt in a cognitive supplement ever. Sign us up.