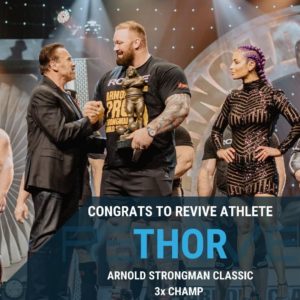 The strongest man in the world trusts Revive MD to keep him healthy.

Revive MD, a leader in health and wellness supplements, has been launching some incredible products lately! Just last month, they launched Lipid, a comprehensive triglyceride and cholesterol management supplement that’s loaded with six ingredients at a seven capsule serving size. It’s obvious that Matt Jansen and Dr. Domenic Iacovone, founders of Revive MD, bring their best when it comes to formulating high quality supplements – especially since their products are used by elite athletes from all over the world.

Revive MD does whatever it takes to make the best product possible and that’s just one of the reasons why they’re quickly rising to the top. You may have even seen their logo on ESPN a few weeks ago, as Hafthor Bjornsson, World’s Strongest Man and Revive MD Athlete, broke the world record for the deadlift by easily pulling 501kgs (1,102.2lbs)!

Revive MD works with athletes that are pushing their bodies to the absolute limit and they need to do everything possible to stay healthy. They have earned the trust from huge names in the industry by creating products geared specifically for health and wellness with unrivaled formulas! 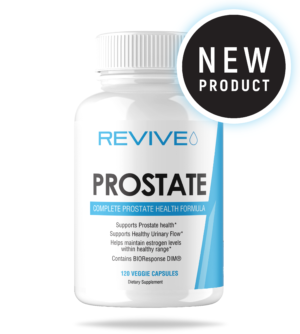 The next supplement in Revive MD’s lineup addresses prostate health.

Despite their success and platform of formulas, Revive MD is never satisfied – they’re always looking for gaps to fill within the sports supplement industry. This time, the brand is focused on optimizing men’s health with the release of Revive MD Prostate!

As always, Revive MD Prostate is packed – it features ten ingredients designed to support proper prostate function, balance estrogen levels, and promote healthy urinary flow. It has a solid combination of saw palmetto, pumpkin seed oil, and stinging nettle to help reduce the annoying symptoms associated with prostate issues. Furthermore, Revive MD also includes three key minerals that are crucial for optimizing men’s health. This is just another example of how Revive MD goes above and beyond with each formula to deliver the best results!

To learn more about Revive MD Prostate keep reading, but first, sign up for Revive MD news and deal alerts so you never have to pay full price on supplements trusted by elite athletes.

Before diving into the science and research behind each ingredient, we first want to educate you on who this product is designed for!

What is Benign Prostatic Hyperplasia?

In case you’re not too familiar with anatomy and physiology, the prostate gland is located just underneath the bladder and it plays a key role in men’s health. 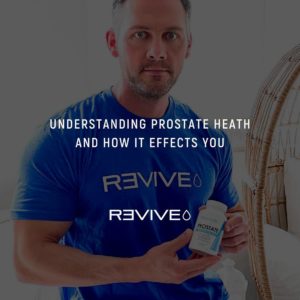 If you’re experiencing signs or symptoms correlated with prostate issues, we would highly recommend seeking out help from a qualified health care professional.

For various reasons, the prostate gland can get enlarged, causing it to apply pressure onto the bladder, resulting in excessive need to urinate, especially at night, and can even block urinary flow. If gone untreated, it can lead to poor kidney function, urinary tract infection, and even bladder stones. The disrupted sleep cycles of frequent urination will also affect overall health, given sleep’s importance. Enlargement of the prostate is often diagnosed as benign prostatic hyperplasia (BPH) and is more common in older males.

If you’re experiencing the signs and symptoms of BPH, we would highly recommend seeing a qualified health care professional for guidance before taking any supplements. BPH may not seem like a major issue, but if you currently have it or have dealt with it in the past, you know it can drastically decrease your overall quality of life and disrupt sleep.

Benign prostatic hyperplasia can be treated with various medications, however, there are also some natural supplements that may improve the severity of symptoms associated with BPH. Therefore, Revive MD decided to dive into the research to see what ingredients are most effective for supporting overall prostate health. They ended up developing a product packed with ten ingredients that offer several health benefits!

Now that the background information is covered, let’s go over why each ingredient is included in this product! Here’s what one serving (4 capsules) (2.22g) of Revive MD Prostate delivers:

Now this is how you formulate a specific supplement. We’ve seen prostate formulas out there on Amazon, and they simply don’t hold a candle to this type of formula. If you’re willing to take seven capsules per day — and you should be if you’re truly concerned about this issue — then there’s truly no single alternative supplement. 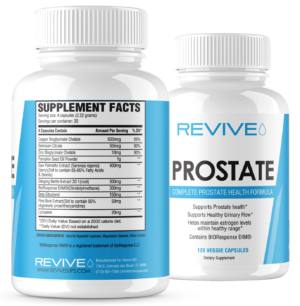 Take back your life with Revive MD Prostate!

Revive MD has grown tremendously in a relatively short period of time. They’ve earned the trust from some of the best athletes in the world, across a wide range of sports, from strongman competitors to professional bodybuilders. Regardless if you’re a competitor, a gym rat, or weekend warrior, health should always be the number one priority.

But unfortunately, the majority of sports supplement companies spend more time formulating the next “hot” pre workout, rather than crafting superior health and wellness products. Several elite athletes and competitors have reached out to join Revive MD because there’s very few, if any, brands that create better supplements solely geared towards health.

PricePlow has started to notice that other companies are beginning to realize Revive MD’s success and are attempting to copy them. It’s obvious that Revive MD is making a huge difference in the industry by showing other brands and consumers how health needs to come first or else performance will drastically decline. If you’re looking for some of the best health products available, then we would highly recommend Revive MD.

Although Revive MD has an incredibly diverse line of products, they’re going to continue to expand their offerings moving forward! Get ready for several more launches from Revive MD by subscribing down below.