Come find out if alpha lipoic acid has a role in your anti-aging stack. If you need appetite control and neuroprotection, look no further. 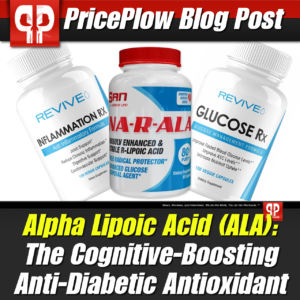 Alpha-Lipoic Acid (ALA) is an organosulfur compound produced from the medium-chain triglyceride caprylic acid (denoted as “C8” on MCT Oil labels). It’s essential for proper functioning of aerobic metabolism, therefore our body produces ALA in small amounts. ALA acts as a cofactor for enzymes, which helps our body produce energy. This is extremely important if we want to perform at our best.

Beyond de novo synthesis, we ingest ALA through dietary meat products. It’s even present in vegetables and fruit, albeit in trace amounts. While we do always have ALA — supplementation can increase ALA concentration by nearly 1,000 fold![1]

Supplements include ALA for its antioxidant benefits — as it helps increase the activity of several enzymes. Beyond its antioxidant effects, ALA acts as an anti-aging, anti-diabetic, and insulin-sensitivity improving compound, and is even available as a prescribed pharmaceutical drug in Germany! We often enjoy using the sodium-bound “right-handed” form of ALA, Na-R-ALA, as part of our glucose control stacks, and anecdotally, it seems to drive inflammation and blood glucose levels to generally lower levels when used regularly.

ALA Supplementation: How To Take It 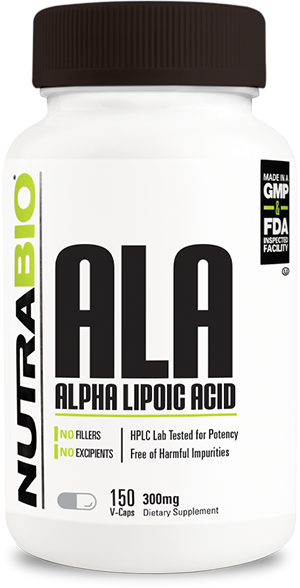 Alpha Lipoic Acid is relatively inexpensive and serves as a powerful antioxidant!

Although we make our own ALA and absorb it from our diet, supplementing with ALA provides us with nearly 1,000 times more than the average diet can.[1] Literature shows ALA is best taken fasted, as food in the stomach reduces absorption. We’d recommend taking ALA at least an hour before a meal or at least 2 hours after a meal for maximum benefit. ALA peaks about 30-60minutes after ingestion.[20]

Na-R-ALA: As bioavailable as injected ALA

The best form of ALA appears to be Na R-(+)-Lipoate, which you’ll find marketed as Na-R-ALA. When compared to other ALA suspensions, the bioavailability of Na-R-ALA reigns supreme — especially over ALA as a “free amino acid”. Oddly enough, oral Na-R-ALA appears to be as bioavailable as injected ALA.[20]

While our keen-eyed fans will note that ALA is lipid-soluble, it does not appear to benefit from coingestion with dietary fatty acids. The GI tract rapidly takes up ALA via monocarboxylic acid transporters. Since MCTs help absorb fats like medium chain-triglycerides, some fats may even negatively impact the amount of ALA absorbed![21] Compared to free ALA, Na-R-ALA is completely water soluble — which is likely why it’s so bioavailable.[20]

Stacking: Depends on the Intended Effects

How you stack Na-R-ALA obviously depends on the results you’re looking for, but we’ve noticed some strong synergy with berberine (specifically GlucoVantage brand Dihydroberberine) in terms of blood sugar levels. 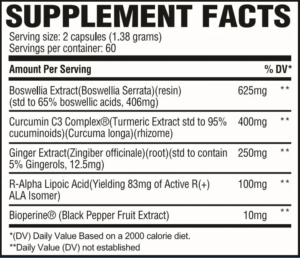 Revive MD took a very unique approach with their Inflammation RX supplement, adding a great dose of Na-R-ALA to other well-known anti-inflammatories

Nootropic users looking to boost acetylcholine levels are always wise to use their favorite form of choline, such as Alpha-GPC.

Some top-rated multivitamins such as SteelFit Steel Multi-V and NutraBio MultiSport also include a bit of ALA to get your day started.

It’s no surprise that bold new companies like Revive MD have included Na-R-ALA in both their anti-inflammatory and glucose disposal agent supplements, Inflammation RX and Glucose RX, respectively.

ALA is one of the most interesting ingredients we have touched on in one of our Supplement Guide articles. While its benefits are on the minor side compared to those covered in some others, the benefits for those in a ketogenic diet or those getting older allows us to recommend it as part of a “general health stack.” As more research comes out in the future, we will be able to better understand how ALA works and in what populations it most benefits. However, we’re confident that this may be a very beneficial thing for many people.

Stay tuned for more information on ALA, PricePlow will be keeping a close eye on the growing body of literature around this topic updating the post as necessary!

All Blog Posts about ALA