Universal Animal Pak: The Product That Created a Brand

Universal Nutrition, based out of New Brunswick, NJ, developed the original Animal Pak in 1983. Their goal was to develop a single supplement pack to fulfill the micronutrient demands of the biggest and hardest working athletes on the planet. They had no idea the original Animal Pak was going to become so iconic — that it would create an entirely independent brand. 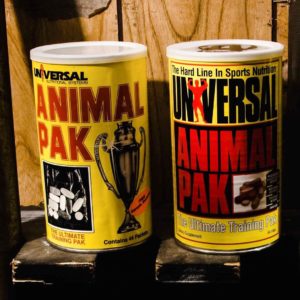 Despite what many think, Animal Pak is far more than a simple multivitamin. It’s been deemed the “ultimate training pack” because of its comprehensive ingredient profile.

The Animal Pak has more than 11 supplements in a single pack, with over 60 key ingredients, such as

Animal Pak was first introduced to the sports nutrition market in pill/capsule form, but now it’s also available in a powder. Although Animal Pak is used by some of the best athletes in the world, you don’t have to be an elite strongman, powerlifter, or bodybuilder to benefit from using it. Regardless of how “perfect” your diet might be, more likely than not, you have some nutritional gaps that could be filled by a supplement like Animal Pak.

Not only can nutrient deficiencies negatively impact performance, but it can increase the risk for injuries and illness, impair recovery, and halt muscle growth. Animal Pak’s ingredient profile ensures that you leave no stone unturned when it comes to nutrition.

The New and Improved Animal Pak

You may be wondering why we’re writing about Animal Pak now since it came out in 1983. Since Animal is committed adapting and improving, the original Animal Pak formula has recently been updated. Now the company provides consumers and athletes with an even more superior product. This isn’t the first time Universal has reformulated Animal Pak — and it may not be the last. But, so far, new and improved Animal Pak is at its peak.

“Good companies have good products. But great companies are always looking to make them even greater. Resting on your laurels is no way to stay on top and a surefire way to fall behind. Animal Pak was created in 1983 and has been improved upon multiple times in the last 3 decades. But, that was not enough. We’ve once again outdone ourselves and leveled up the #1 Training Pack and revamped our elusive formula. Animal Pak has always been the top training pack used by strength and physique athletes, all the way to the average Joe but now it just set the bar even higher. We took it to the next level…will you?”

Keep reading to learn more about Animal Pak’s new formula and subscribe below for more Universal news, reviews, interviews, and deals from PricePlow! 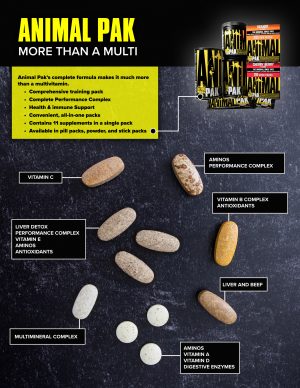 Here are some major changes Universal made to Animal Pak this time around:

It’s important to note that Animal made changes to both Animal Pak and Animal Pak Powder. So if you prefer a powder over taking multiple tablets, or vice versa, the choice is yours! Moreover, if you’re a competitive athlete who’s subjected to drug testing, Animal Pak Powder is Informed-Sport Certified! That means the product is third-party tested to ensure it’s fully free of banned ingredients.

For optimal results, Universal recommends taking either two packs of Animal Pak or two scoops of Animal Pak Powder per day, preferably in the morning with your first meal. Since it has some energy-boosting ingredients, such as green coffee bean extract, avoid taking Animal Pak within four to five hours prior to bedtime. 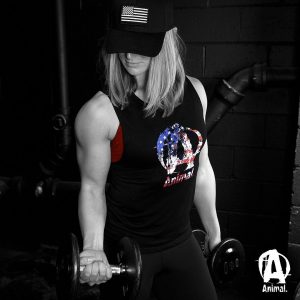 As millions of American have learned, there’s far more to health than just “calories” 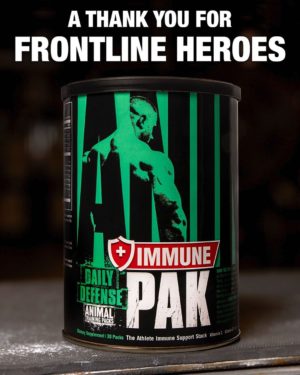 If you don’t care for the taste of greens, try Universal Animal Greens! 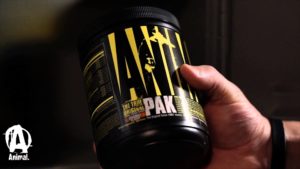 After dominating the multi-vitamin realm for 30 years, Animal Pak is now available in easier-to-go-down powder form.

Here’s an updated list of all Animal Pak Powder flavors:

Although original Animal Pak is phenomenal on its own, for more health benefits, it stacks well with the following supplements:

There are few companies in the sports nutrition industry that we consider “legacy” brands, but without a doubt, Universal Nutrition is one of them. Of the many things we admire about Universal is that they never settle. They’re always open to improving their products. Animal Pak is a prime example of that. When Animal Pak was released nearly three decades ago, it was the first of its kind. Even today, there’s really no other supplement pack on the market that’s as complete as original Animal Pak. 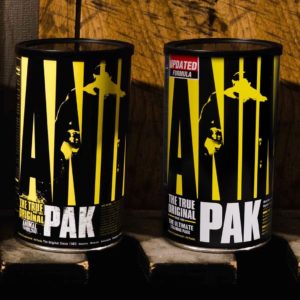 Pick up the original Animal Pak for even more micronutrients!

As Universal learns about new ingredients and technologies, they continue to improve the formula, regardless of how well previous versions performed. As consumers, PricePlow respects any brand willing to improve their products the way Universal continues to do year after year.

From the outside looking in, Universal may seem like a sports nutrition brand for hardcore, high-level bodybuilders and strength athletes. But over the past few months, the company really expanded their line of health and wellness products for a broader customer base.

In regards to performance, Universal stepped up its game by working with some of the top ingredient suppliers in the industry, such as Nutrition21. Earlier this year, Universal released Animal Pump Pro, which featured Nitrosigine at the clinically-studied dose. It’s a cutting edge ingredient that effectively increases blood flow, focus, nutrient delivery, performance, and pumps!

Needless to say, Universal proves why they’re a legacy brand by continuing to produce top-tier supplements while improving existing products. Subscribe below for more Universal news, reviews, interviews, and deals from PricePlow!