When it comes to our diets, we are far too often concerned about calories and total fat, while ignoring the importance of the quality of fat we eat. Today, we focus on Universal Nutrition’s Animal Omega, an essential fatty acid supplement pack meant to improve our fatty acid ratios and provide a unique arrangement of fats that aren’t normally ingested in our diets. 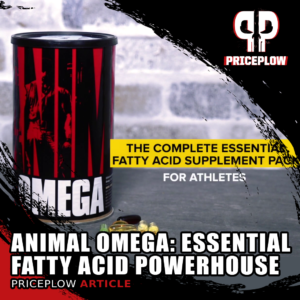 With ten different sources of omegas, this heart-health focused supplement is built to lower inflammation and improve lipid levels, and includes a few ingredients to improve fatty acid absorption, transport, and oxidation. First, let’s talk about why we’re here.

The overwhelming data on omega-3:omega-6 ratios

As you can imagine, there have been countless studies on the topic. There is strong research showing that humans (and animals) had an omega-3:omega-6 ratio close to 1:1 prior to the industrialization of food,[1-4] and ratios skewed against omega-3 consumption are predictive of mental illness,[5-20] cardiovascular disease,[1,21] insulin resistance and general metabolic dysfunction,[22-25] diabetes,[26-28] and obesity[29,30] — and the evidence is further strengthened with data on childhood obesity.[31] The data is quite clear: low omega-3 intake paired with high omega-6 intake — which is what the Western diet has become[1,32-34] — is extraordinarily deleterious to one’s health.

How do we fix these issues? As always, we encourage a diet-first approach, which consists around the removal of ultra-processed foods and refined sugars/carbohydrates. But in addition, it’s wise to boost the quality fats as well, and that’s what we’re doing with Animal Omega. Stack it with Animal Flex, and you’re on your way to a far lower inflammation year.

Nearly 100 studies are covered in this article, so let’s dig in after checking PricePlow’s coupon-powered prices:

In a pack of Animal Omega, you get seven softgels and one capsule containing the following blends:

If you’re susceptible to “fish oil burps”, consider freezing them and taking them just before bed. 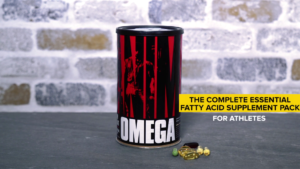 The “pack” method makes an incredible difference here, allowing Animal to include an additional capsule for the absorption ingredients. We’re surprised that we don’t see more essential fatty acid supplements including lipase, especially.

Are you an animal?

A great anti-inflammatory supplement to stack alongside is Animal Flex, while dieters will definitely enjoy Animal Cuts or Animal Cuts Powder — we prefer the latter due to the amount of L-carnitine that’ll be included to assist with fatty acid transport. On that note, stay tuned to PricePlow and our Universal Nutrition news — a new Animal Cuts Powder flavor has arrived, and we’ll be covering that next!