Animal Pak users have been training for this very moment.

One that includes the tried-and-true everyday “old school” ingredients like glucosamine, chondroitin, and MSM, along with some more “modern” anti-inflammatory ingredients like novel omega-3 fatty acids, boswellia, and quercetin. 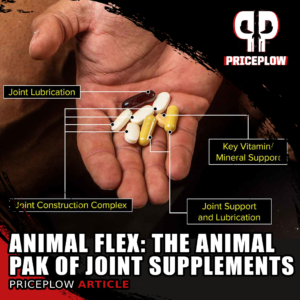 Meet “The Animal Pak of Joint Supplements”: Animal Flex! And if this many pills isn’t your style, take a look at the collagen-boosted Animal Flex Powder.

When most brands have to choose between large doses of glucosamine/chondroitin/MSM and other ingredients, Animal has a better solution:

Animal Flex: The “Why Don’t We Do Both?” Supplement

With long enough use, glucosamine, MSM, and chondroitin have solid scientific backing. The only issue is, they alone take up 5-6 capsules, leaving little room for other ingredients!

But when your customers are already used to taking vitamin packs, you’re at a solid advantage. That’s exactly what Universal Nutrition did with Animal Flex, keeping efficacious amounts of glucosamine while also adding novel fatty acids and herbs. It’s always been available in “Pak” form, but is also available in powder form, swapping out the omega-3s for collagen.

This year, make it your goal to keep your joints running strong so that you’re running strong. We cover Animal Flex’s ingredients below, just after showing our PricePlow-powered prices and video training:

Below, we’ll focus on the Flex packs, but then talk about some of the differences in the powder as well.

What else is in the Animal Flex powder?

Beyond the above blend, Animal Flex Powder also has collagen added, making the Joint Lubrication and Support Complex into one large 6 grams blend. Atop its cardiovascular benefits,[80] collagen supplementation has been shown to improve connective tissue and joint health as well.[81,82]

This replaces the ALA (alpha linolenic acid) from flaxseed oil, so instead of 1 gram of fat on the label, you end up with 4 grams of protein. Not that we’re here for the macros, but it’s important to understand the differences between the packs and powder. 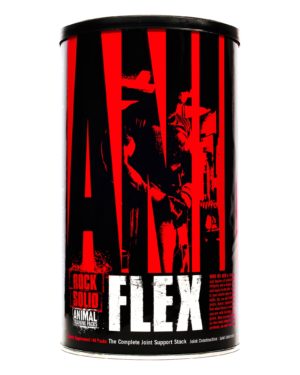 Get your FLEX on

The “Animal Pak” of Joint Supplements

Animal isn’t just about Animal Pak. When it comes to creating a proper joint supplement, brands often make concessions for or against glucosamine, MSM, and chondroitin due to the amount of space they take up. They either underdose it, or ignore them altogether in favor of other popular anti-inflammatory ingredients like curcumin and boswellia.

But there are definite benefits when your customer is used to taking nine pills at a time in a single pack. Animal Pak has trained Universal Nutrition’s consumers for this very moment: a joint supplement formula that takes the “why don’t we do both?” approach!

So if you’re not afraid of throwing down a pack of pills to get the joint support you need, then Animal Flex should definitely get consideration. And if you’re not into that, then there’s still powder as well – with collagen to boot.